Calif. regulators penalize no one in 2021 Breeders' Cup gaffe 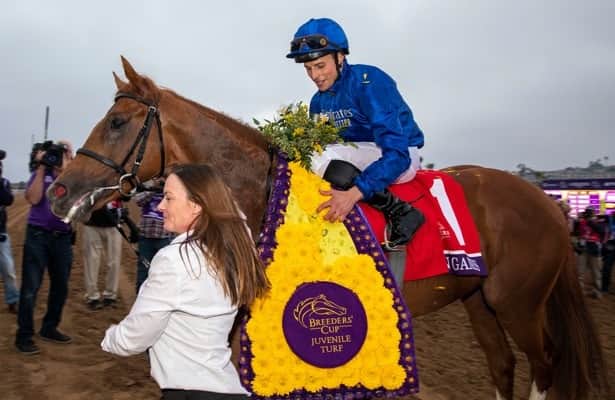 The California Horse Racing Board’s investigation into the erroneous scratch of Modern Games at last year’s Breeders’ Cup Juvenile Turf has been completed and it notes “inconsistent radio communications” played a pivotal role in the mixup.

In issuing its findings, the CHRB said no complaints would be filed as a result of the inquiry. However, supervising investigator Michael Barker, who interviewed "12 precipient witnesses to the incident," did issue a series of recommendations to help prevent similar occurrences in the future.

According to a summary of the report, no complaints were filed following the investigation due largely to the fact the CHRB "will not disincentivize regulatory veterinarians from recommending scratching horses when they have any iota of concern regarding their fitness to race."

The following three-page summary of the investigation’s finding was provided by the CHRB.

“The 2021 Breeders Cup World Championships was held November 5 and 6 in Del Mar,  California, and hosted by the Del Mar Thoroughbred Club.

"However, because Modern Games (IRE)  ran for purse money only, the horse that finished right behind him, Tiz the Bomb, was declared  the official winner for pari-mutuel purposes. While most wagers on Modern Games (IRE) were  refunded or received consolations in accordance with CHRB rules, Pick 4, Pick 5, and Pick 6  wagers that included Modern Games (IRE) received the race favorite, Dakota Gold, in place of  Modern Games (IRE) unless a different horse was named as an alternate selection when the  wager was placed.

"After the conclusion of the race, the California Horse Racing Board  investigated the matter to determine what had occurred. While the CHRB does not typically  release an investigation report, especially when it does not result in a complaint, given the  widespread public interest, a summary of the investigation is provided.

"The Board’s investigation was conducted by Supervising Investigator Michael Barker.  Supervising Investigator Barker interviewed 12 percipient witnesses to the incident. Those  witnesses included personnel from the starting gate (veterinarians, starter, and assistant starters),  the stewards, placing judges, personnel in the pari-mutuel office and personnel in the totalizator  room. All witnesses were cooperative with the investigation.

"At the conclusion of the investigation, Supervising Investigator Barker made the following  findings:

"Albahr (GB), was in the number two stall. Albahr (GB) reared up over the starting gate, then  fell back on to his side, with his legs caught under the number three stall. During this time, the  horse in the number one stall, Modern Games (IRE), went through the front gate after the gate was opened by starting gate personnel and was uninjured.

"During the investigation it was clear that inconsistent radio communication effected the events  that transpired. Various witnesses indicated that they made calls over the radio that were not  heard or received by the intended recipients. At some points witnesses resorted to cell phone  communication to ensure their messages were relayed.

"The investigation noted that the regulatory veterinarians’ hurried recommendation to scratch Modern Games (IRE) could potentially have been avoided if a protocol requiring one person on the veterinary staff and one  person in the pari-mutuel department be in charge of scratches had been in place.

"The CHRB considered the merit of applying CHRB Rule 1697 to the recommended  scratch by the regulatory veterinarians. However, Executive Director Scott Chaney declined to  file complaints for two reasons: (1) The difficulty of proving a violation given that a condition  precedent to a violation of this rule is that a horse actually broke through the gate; and (2) more  importantly, animal welfare is of paramount importance in the CHRB’s application of rules and  creation of protocols.

"Despite the fact there will not be any complaints filed in this matter, the CHRB nevertheless  endeavors to prevent similar occurrences in the future. To that end, several recommendations  have been identified.

"(2)The tote company and the pari-mutuel department must each designate one person who  can effectuate a scratch or purse money only designation by the Stewards. Both must  agree before either action can take place.

"(3)A horse cannot be placed back into the mutuel pools after it has been scratched without  approval of all three Stewards.

"(4)A Pari-mutuel Committee meeting should be held to consider changes to pari-mutuel  regulations. Issues that may be considered include but are not limited to: (a) advisability  of a purse-money-only designation and (b) requiring ADW companies to follow the  example of brick-and-mortar wagering facilities in California by providing bettors with  the opportunity to name alternate selections for scratched horses in Pick “n” wagers  involving four or more races.

"(5)Associations, particularly on days when there are large crowds and competing bandwidth,  must provide an adequate communication system for racing officials.