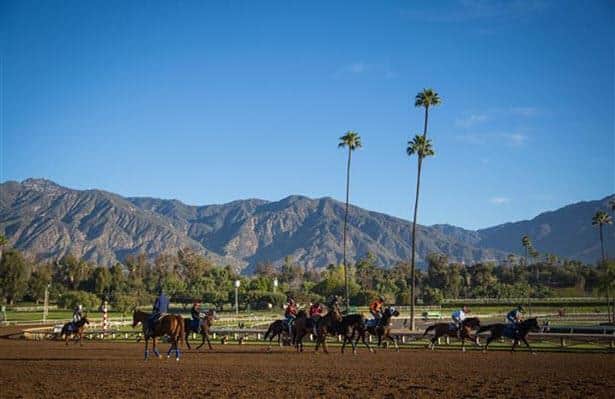 Bubbling to the surface of a California Horse Racing Board committee meeting Tuesday, convened to address the possibility of penalizing trainer’s for equine deaths, was the proposed creation of an “accident prevention task force” possibly headed by the California Thoroughbred Trainers.

The meeting of the CHRB’s medication, safety and welfare committee, held telephonically on Tuesday, drew plenty of advanced attention given the potentially ground-breaking topic. It was described as being “exploratory” in nature in advance, and no action was taken by the committee. But the groundwork was laid by CTT executive director Alan Balch for the creation of a statewide task force to aid in the reduction of equine injuries and deaths.

This panel as proposed would include representatives from a variety of industry groups including racetracks, trainers, owners, regulators and veterinarians. “I can hear people out there right now saying, ‘Oh, another alphabet organization,” Balch said. “Well, what I noticed based on about five decades in this sport, there’s less connectivity between all the factions than there used to be. I think we really need to change that and get back to the way it used to be.” Prior to Balch’s proposal from the CTT, CHRB chairman Dr. Gregory Ferraro shed light on why regulators saw fit to broach the topic of sanctioning trainers for horse deaths. He indicated his concern is “a handful” of trainers that “year after year” have multiple horses die in their care. “We know that any given year, any trainer could have a breakdown. It could happen to anybody,” Ferraro said in the meeting’s opening comments. “And if you look at the numbers over the last few years, by far the vast majority of trainers had no more than one breakdown in any given year. And many, many have none. “But there's a handful, just a handful of trainers who have multiple breakdowns year after year after year," Ferraro added. "That handful of individuals is endangering the welfare and health of the industry. ... We're looking for solutions.” Piggybacking on Ferraro’s opening comments, CHRB executive director Scott Chaney noted there were 72 Thoroughbred fatalities at CHRB-licensed facilities during the 2020-21 fiscal year. He said 14 trainers had multiple horses die during that time period with the remaining 58 trainers of record enduring a “one-off” fatal incident. Chaney added 12 trainers had two horses die, one trainer had three fatalities, and another trainer had four horses die during the ’20-21 fiscal year. Balch said the plan for the accident prevention task force was formulated during two meetings of the CTT membership attended by more than 100 licensed trainer’s. “What I offer you is a distillation of a very broad spectrum,” Balch said. Before getting into the details of the proposal, Balch pointed out the noteworthy drops in equine fatalities in California since Santa Anita’s disastrous winter of 2018-19. He noted the reduction has been due to improvements undertaken by all the sport’s stakeholders. “Were trainers primarily responsible for the unconscionable spike in accidents and injuries three years ago, then they would logically be responsible for the vast improvements achieved since then and the greater safety,” Balch read from a prepared statement. “We as trainers know that neither observation is correct. That, instead, combinations of many circumstances and teamwork led to better practices and regulation, culture and conduct."

In offering his proposal, Balch noted there is already a rule on the book’s in California that addresses animal welfare. Rule 1902.5 states in part “no person (shall) ... permit or cause an animal under his control or care to suffer any form of cruelty, mistreatment, neglect or abuse.” Balch suggested that specific rule “could be further elaborated but with great care.” As for the proposed accident prevention task force, Balch likened it to the National Transportation Safety Board, which investigates all aviation accidents. “Is there any reason California racing couldn't form its own similar fact-finding entity, to learn from each and every accident, perhaps to be expanded on a national scale?” Balch asked. He added the body’s responsibilities would require “balancing penalties for unacceptable behavior, with incentives for improved education. “Lack of satisfactory training is often a key factor in aviation accidents,” Balch noted. Under the proposal, continuing education would not be limited to trainers, but would include a variety of industry stakeholders. To further aid in horse safety, Balch suggested the creation of a “best practices manual” for training. It could potentially be formulated by convening a group of trainers and veterinarians to gather a spectrum of input, Balch proposed.

Other suggestions from Balch and the CTT included improvements to the equine-injury database and to the CHRB’s own reporting of injuries and deaths, which he described as being “insufficiently detailed.”
The organization also proposed reconsidering synthetic tracks in California for either racing or training. Balch noted the vast improvement to the surfaces since California’s synthetic track era, which largely ended when Santa Anita reverted to traditional dirt in 2010. “Looking at synthetic again is probably something that needs to be done,” Balch said.

Chaney also noted he is in regular communication with Balch, and the two have discussed other possible ideas for improved equine safety. Most notable among those would be the expansion of video surveillance at CHRB-licensed facilities.

"I think at some point in the very near future, the CHRB, hopefully with the support of stakeholders, will be a little more active in crafting regulation that will create more video surveillance," Chaney said. "That has to be the future of horse racing."