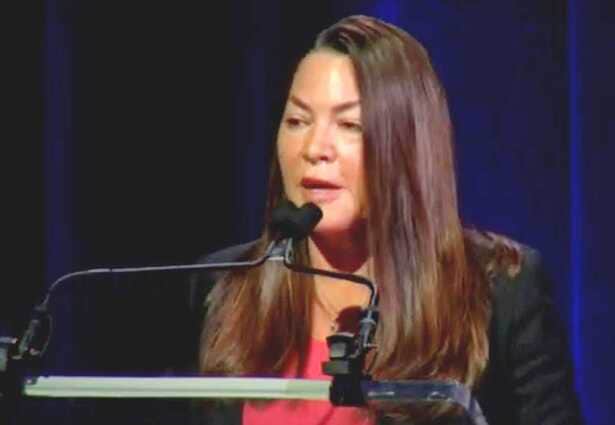 Admitting she has “taken more than a few punches,” Lisa Lazarus expressed confidence Sunday that there is widespread support for the Horseracing Integrity and Safety Authority that she has been running as CEO for the past six months.

“I am more convinced than ever ... that the vast amount of racing participants support our mission and what we’re trying to accomplish,” Lazarus told the 70th annual Jockey Club Round Table on Matters Pertaining to Racing at Saratoga Springs, N.Y.

WATCH: Jockey Club Round Table on Matters Pertaining to Racing

While calling for unity among the leaders of the sport, Lazarus acknowledged critics who range from horsemen’s groups to state jurisdictions, including those who took HISA to federal court in both Louisiana and Texas.

“Let’s have vigorous debate about what the rules should be,” Lazarus told an audience made up mostly of HISA allies. “Let’s never forget that our real adversaries are the bad actors who tarnish our sport – anyone who is cavalier about horse welfare and those who want to shut down horse racing for good.”

She defined the “bad actors” as those who “are illegally doping horses.” She credited the Jockey Club with leading the effort to prosecute violators, presumably including 27 defendants who were busted in a high-profile, federal sting in 2020.

Lazarus then sent a warning to anyone who would dare to test HISA’s more robust, anti-doping rules that take effect Jan. 1.

“These prosecutions sent a powerful message,” she said. “When HISA takes over the anti-doping space in January, the horse-racing integrity and welfare unit’s job will be to build on these huge successes and create a sustainable and effective deterrent to cheating across the country.”

Lazarus said the HISA racetrack-safety program that took effect July 1 is making progress in guaranteeing the well-being of racehorses.

Calling out critics whom she believed were content to maintain business as usual, Lazarus said, “We must rebuild trust in the industry, both with the public and amongst each other. We need to preserve our traditions but tolerate change. ... It is no longer good enough to say we need to keep doing things this way, because it’s how we’ve always done it.”

Racing commissions in Louisiana and West Virginia have said HISA has overstepped constitutional boundaries, especially with regard to states’ rights. They got a preliminary injunction July 26 that temporarily kept HISA from doing business in those two states. Then HISA went to a higher court and won a stay order Monday that put most of its regulations back into effect until the full case could be heard.

He paid lip service to some of the plaintiffs’ claims regarding search and seizure, funding and the advance notice for comments before HISA took effect.

Janney concluded that the “court nevertheless acknowledged that the implementation of (HISA’s) rules cannot be stopped. So to be clear, none of these issues threaten HISA’s long-term viability, but they certainly waste time and money.”

Janney said the suit brought this month in a Texas federal court by Global Gaming, the owner of Lone Star Park, “recycles many of the failed claims.”

Even as the legal challenges grow and critics raise their voices about HISA, Lazarus was adamant about getting the sport on the same page.

“We will work tirelessly to unify this industry,” she said. “It will be hard, but we will not give up on unity. I am passionate about it, because we have to do it to be successful. I don’t mean again that we’re going to agree on every single rule, but I mean that we unify around the governing principle, the core principle, that we need to speak with one voice outside particularly the industry.”

The Horseracing Integrity and Safety Authority