By My Standards asserts himself with Oaklawn Handicap win 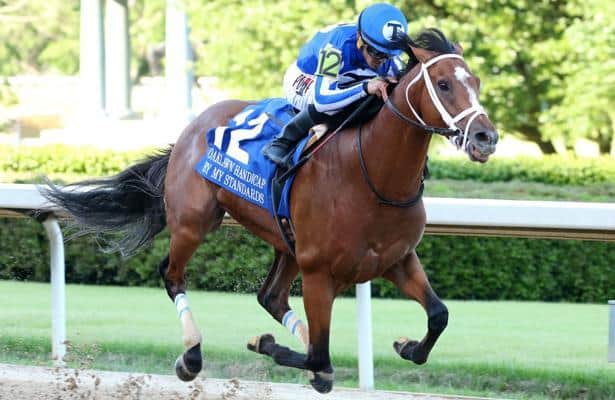 When deciding to send By My Standards to the Grade 2, $600,000 Oaklawn Handicap, trainer Bret Calhoun said it was with hopes of seeing the colt blossom into one of the nation’s top older horses.

The son of Goldencents arrived Saturday when stalking the pace, then going by Warrior’s Charge for another signature score at Oaklawn Park.

Campaigned by Chester Thomas’ Allied Racing, By My Standards improved to 3-for-3 this season with victories in allowance company as well as Fair Grounds’ New Orleans Classic (G2). He hasn’t received a serious challenge yet, beginning to carve a path to the Breeders’ Cup Classic.

“He’s growing every time and he’s getting better and better," Saez said. "I talked to Bret this morning. He doesn’t give much instructions — just try to get into a good position and get the job done. ‘Gabe, you know what to do, and you’ve been on him most of the time.’”

By My Standards ( USA)

Warrior’s Charge stuck around for second in a stacked field, the nature of racing with so few options for horsemen to choose from. The fractions flashed up in 23.02 and 46.91 before By My Standards began to range up through the turn.

“He ran good," said Warrior's Charge jockey Florent Geroux. "It wasn’t like we were the only speed. They were fair fractions. Not suicidal by any means. My horse had a long time between races and I think he got a little tired. He was also stretching out to 1 1/8, which is a question for him. It was a great race. Tough field and he showed up.”

Behind Warrior’s Charge, who was defeated by 1 3/4 lengths, Mr Freeze ran third after a wide trip and Tacitus came in fourth given a bump-and-run first turn.

By My Standards returned $11 after leaving the gates at 9-2.

The colt was slow to come around early in his career, but Calhoun saw the light turn on when By My Standards broke his maiden in February of 2019. One race later, he upset the Louisiana Derby (G2) and went on to the Kentucky Derby, running 11th after getting shuffled back at the start.

Lingering physical issues sent By My Standards to the sidelines for the rest of his 3-year-old season. Back as an older horse, he's quickly making up for that lost time.

With Calhoun's string relocating to Kentucky in the coming weeks, a race such as Churchill Downs' Stephen Foster (G2) scheduled for June makes sense as the next step. It is traditionally a "Win and You're In" event toward the Breeders' Cup Classic running Nov. 7 at Keeneland.