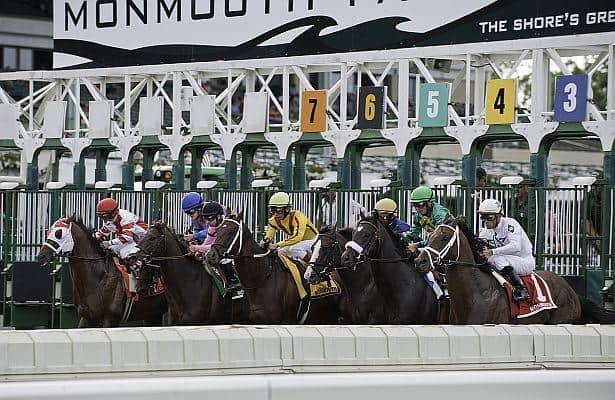 After finishing second in both of her stakes appearances this year, Bustin Out goes for her first career stakes victory in the $60,000 Eleven North Handicap going six furlongs for fillies and mares at Monmouth Park on Sunday, which marks the 14th annual New Jersey Thoroughbred Festival and the best of the best runners bred in the Garden State.

“She is doing great,” said Chuck Spina, who conditions the horse for Gayle and Joseph Ioia. “She made a terrific effort last race against one of the best filly sprinters in the country (Stonetastic). It may have been her best race.”

Prior to finishing second to Stonetastic in the Regret Stakes, Bustin Out’s only other stakes run in 2016 came in the Open Mind Stakes where she led the entire way before getting beat just a nose at the wire against Eleven North rival She’s Hot Wired.

The 4-year-old filly by Bustin Stones out of the Disco Rico mare Disco Shaker has made 11 starts over the Monmouth main track, hitting the board each including seven by way of victories. Her lone run out of the money at Monmouth came in last year’s Miss Woodford Stakes.

Bustin Out hasn’t worked since her run in the Regret. Her last breeze came on July 24 when she went four furlongs in :51.

“She seems to be the speed of the speed,” said Spina. “I think she has a good shot. These races are never easy and there are some nice horses.”

To get to the winner’s circle, Bustin Out will have to hold off Let’s Parlay, for Gregg Sacco, who exits a win in his first start back off an 11-month layoff.

Ride Ride Ride looks for his first win in over a year when he goes into the gate with nine rivals in the $60,000 Charles Hesse III Handicap going a mile and a sixteenth on Sunday at Monmouth Park.

“He’s been doing great,” said John Tammaro III, who owns and trains the horse. “We’ve given him some time off and he always seems to run well fresh.”

The 6-year-old gelding by Candy Ride out of the Smart Strike mare Smart N Sassy made his last start in the allowance optional claiming ranks on the turf where he finished sixth behind Charles Hesse III rival Jersey Blues.

Prior to his most recent outing, Ride Ride Ride finished second in back-to-back claiming races, one at Monmouth and the other at Tampa Bay Downs.

Ride Ride Ride last found the winner’s circle in July 2015 when he scored a 6 ¾ length win in a $50,000 allowance event for New Jersey breds, beating another rival he will face on Sunday in Cheddar Chub.

Ride Ride Ride has worked three times since his latest start. He was the lone runner to go seven furlongs over the Monmouth main track on Aug. 17 when he went the distance in 1:30 2/5.

“The work was just to get him ready to run,” said Tammaro in reference to his last work. “He does have some speed, but he has come from off the pace as well. That’s when we are just going to see how he breaks. We don’t want him going too wide into the first turn.”

To take the Charles Hesse III crown, Ride Ride Ride will have to beat Don’s Marsh, who will be breaking from the rail for trainer Terri Pompay.  Don’s Marsh has won three of his five starts over the Monmouth dirt this meet. Dan Horn champion and Jason Servis trainee Fuzzy Muzzle looks to make it back-to-back wins the Charles Hesse III, taking last year’s edition from off the pace by 4 ¼ lengths.

The Charles Hesse III is set to go as race 10 on Sunday’s 11-race card which includes two other stakes for New Jersey breds earlier in the card. Gates open at 11:30 a.m. with first post scheduled for 12:50 p.m.

The best that New Jersey breds have to offer will be on display on Sunday at Monmouth with the 14th annual New Jersey Thoroughbred Festival presented by Malouf Auto Group.

Three stakes races restricted to horses born in the Garden State are on tap for Sunday including the Charles Hesse III Handicap, Jersey Breeders Handicap and the Eleven North Handicap.

Along with a great day or racing, there will also be a NJ Thoroughbred Festival long sleeve t-shirt giveaway with paid admission, while supply last.

In addition, live music will be playing “On the Green” from the Larry Stevens Band.