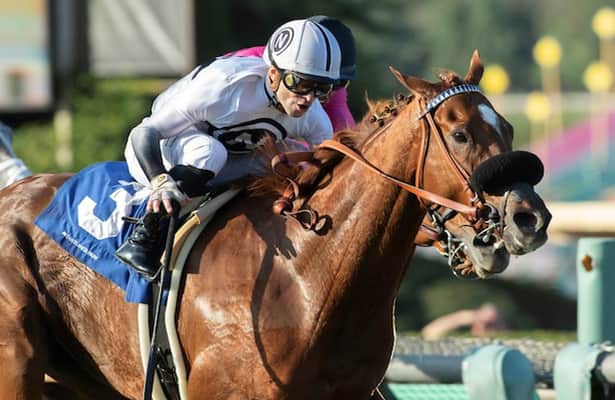 Under patient handling from Umberto Rispoli, Irish-bred Burgoo Alley rallied off the turn for home to overhaul favored Spanish Loveaffair late and take Saturday’s Grade 3, $100,000 Autumn Miss Stakes at Santa Anita by a half length. Trained by Phil D’Amato, Burgoo Alley got a flat mile on turf in 1:34.37.

“We got a very polished ride from Umberto,” said D’Amato. “He rode with confidence and he saw the pace was fast enough. He saved ground, split them turning for home at the right time and we just got up.”

“I think the distance is the key for her,” said Rispoli, who guided Burgoo Alley to a one-mile turf allowance win two starts back on Aug. 14 at Del Mar. “… I knew today that I could end up in a nice spot. She was sharp from the gate, giving me the chance to be where I wanted to be, just behind the favorite (Spanish Loveaffair) and I got a very nice trip.”

Owned by CYBT, Michael Nentwig and Ray Pagano, Burgoo Alley, who was winless in three starts in Ireland, picked up her third win in six stateside starts and improved her overall record to 9: 3-2-1. With the winner’s share of $60,000, she increased her earnings to $170,330.

Spanish Loveaffair, who was coming off the best race of her career in winning Belmont Park’s ungraded Pebbles Stakes on Sept. 19, was making her Southern California debut for Mark Casse and got crushed in the late wagering, going off as the 5-2 favorite.

Ridden by Drayden Van Dyke, Javanica rallied from fourth at the quarter pole to outrun Zero Tolerance by a half length. Off at 14-1, Javanica paid $5.60 to show.

First post time for Santa Anita's 10-race card on Sunday is at 3:30 p.m. EDT. Sunday is closing day, and if there is no single ticket winner in Saturday’s 20-cent Rainbow Pick Six Jackpot, it is expected Sunday’s total Rainbow Six pool could approach $5 million.