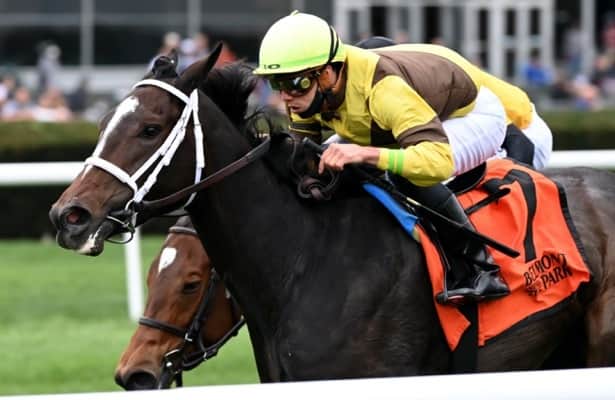 Shortleaf Stable’s homebred Bubble Rock reeled in pacesetter Mystic Eyes and staved off the late-running Gal in a Rush to secure a half-length score in Saturday’s Grade 3, $150,000 Matron, a six-furlong inner turf sprint for juvenile fillies at Belmont Park.

Mystic Eyes, with Manny Franco up, broke alertly and led the field through a half-mile in 44.24 seconds over the firm going with Makin My Move tracking her early foot from second position.

Bubble Rock, who settled outside rivals in third, advanced four-wide through the turn and gradually picked off Makin My Move before surging past a stubborn Mystic Eyes to secure the win in a final time of 1:08.01.

Gal in a Rush, who exited the outermost post 9 under Dylan Davis, saved ground in the early going before tipping out and rallying strongly down the lane to complete the exacta by a half-length over Mystic Eyes.

“She’s nice. Last time she won and finished well, too,” said Ortiz, Jr., who has piloted Bubble Rock in all three starts. “I just did the same thing today. I waited for my time to go and when I asked her, she finished up really strong again. She’s got a really good size to her, and she always finishes well, so I think she’ll be alright.”

Dustin Dugas, the New York-based assistant for Cox, said Bubble Rock has matured over the course of her campaign.

Rounding out the order of finish were Makin My Move, The Club, Lady Danae, Dufresne, High Arabian and Mainstay. Benbang was scratched along with the Wesley Ward-trained duo of Poppy Flower and Chi Town Lady, who are both slated to take on the boys in Sunday’s Futurity (G3).

Bubble Rock is out of the Giant’s Causeway mare Reef Point, who is a half-sister to millionaire Blue Chipper – winner of the 2019 Keeneland Korea Sprint (G1) in Seoul and third-place finisher in that year’s Breeders’ Cup Dirt Mile.