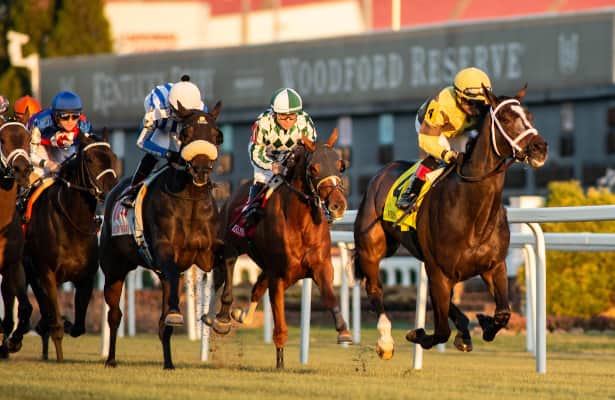 Bubble Rock broke alertly and led every step of the way to win Friday’s 30th running of the Grade 2, $300,000 Mrs. Revere for 3-year-old fillies at Churchill Downs by 1 1/4 lengths over Joyful Applause.

BUBBLE ROCK gets the win wire to wire in the G2 Mrs. Revere Stakes! Congrats to @bradcoxracing and @ShortleafStable on the win!

She shot out of the gate and set moderate fractions of :24.17, :49.26 and 1:13.75 as longshots Joyful Applause and Take a Stand tracked about one length back in second and third, respectively, down the backstretch. Bubble Rock was never seriously threatened into the final turn or in the stretch and the top three finished in the same position nearly all the way around the trip.

“She broke very well from the gate and took me to an easy lead down the stretch,” Rosario said. “She got into a really good rhythm and we weren’t going too fast down the backside. I could feel around the turn I still had a lot of horse beneath me and she was able to kick clear in the stretch.”

“We’re very proud of her effort today,” Cox said. “She’s a filly that we tried multiple distances with and at the end of a 3-year-old campaign this was a target for us. She’s run well at Turfway in the past so we could keep that as a target this winter.”

Bubble Rock is a dark bay or brown daughter of More Than Ready out of the Giant’s Causeway mare Reef Point who was bred in Kentucky by her owner.

The Mrs. Revere is named in honor of Mrs. Revere, an accomplished Churchill Downs fan favorite in the mid-1980s. Mrs. Revere won 12 races in 28 starts, finished second seven times and earned $429,545 for Hall of Fame trainer Bill Mott. Her six wins in a dozen starts at Churchill Downs included stakes triumphs in the Regret, Dogwood and Edgewood in 1984 and the Kentucky Cardinal in 1985. She was owned by Dr. Hiram Polk and the late Dr. David Richardson, who have provided the winner’s trophy for the Mrs. Revere in each year of its existence.