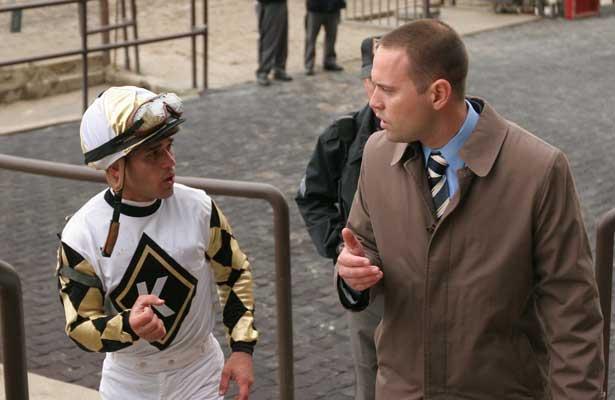 Trainer Chad Brown sent out a pair of runners coming off long layoffs in the one-mile De La Rose on the Whitney Day undercard. Dayatthespa and Pianist, who finished second and third, respectively, had not run since they contested the Grade 1 Matriarch on December 1 at the now defunct Hollywood Park.

Dayatthespa, a Grade 1 winner, was eager to run in the opening stages of the De La Rose, grappling with Alaura Michelle for the early lead, while Pianist, a Grade 3 winner, uncharacteristically assumed position in the middle of the pack. Turning for home, Dayatthespa spurted away from the field as Pianist commenced a wide rally.

In deep stretch, the Bill Mott-trained Filimbi ran by Dayatthespa, and Pianist closed ground late to finish a length behind her stablemate.

"I was surprised [Pianist] didn't break as well and wasn't involved early," said Brown. "I was not expecting that, but I thought she finished well. On the flip side, Dayatthespa was a little keener than I would have liked, and I think that ultimately led to her defeat.

"They both ran well and they both came out of the race in good shape. I think the layoff hurt them a little bit, but they should be better off for it now that they have a race under them."

The two are likely to be separated going forward, and, according to Brown, their next races will be determined by how they train this week.

Big Blue Kitten, also coming off a sizeable layoff, won the 1 1/16-mile Lure on Whitney Day for Brown. The son of Kitten's Joy, owned by Ken and Sarah Ramsey, prevailed despite two glaring disadvantages: the distance and the layoff.

The Ramsey color-bearer is a multiple Grade 1 winner at marathon distances on turf, but is not nearly as accomplished at middle distances. On Saturday, racing for the first time since finishing eighth in the Grade 1 Breeders' Cup Turf on November 2 at Santa Anita Park, he rallied from the back of the pack to win going away.

"So far, so good," said Brown. "I don't have any immediate plans for [Big Blue Kitten] yet. It'd be a long shot [to make the Grade 1 Sword Dancer Invitational on August 17], but it's not completely out of the question."