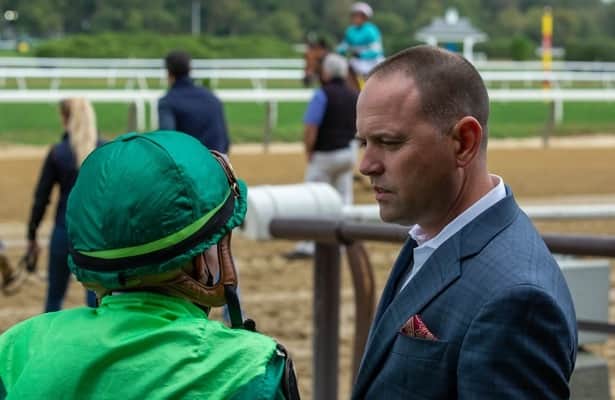 Inflation Adjusted’s win in Sunday’s 10th race finale gave Seth Klarman’s Klaravich Stables its eighth win of the meet, which broke a three-way logjam allowing Klaravich to become leading owner of the Belmont Park fall meet for the fifth consecutive year. Flying P Stable and Michael Dubb each finished with seven wins over the course of the fall meet.

Brown extended his dominance of the Belmont fall meet, posting a record of 29-22-18 from 111 starters with earnings of more than $3.7 million. The four-time Eclipse Award-winner for Outstanding Trainer has won at least a share of the Belmont fall meet every year since 2012. Hall of Famer Todd Pletcher concluded the fall meet with 16 wins. Christophe Clement and Linda Rice registered 16 wins each to tie for third.

“I have to just thank my team, my owners and the horses,” Brown said. “Those are the three real key parts to the whole success and I'm very fortunate in all three areas to have the best. I have great horses to work with and terrific owners and a really super talented team and they deserve all the credit."

Entering Closing Day, a three-way tie for the riding crown set up an exciting slate, with Ortiz, Jr., Luis Saez and Jose Ortiz all tied with 30 wins. But Ortiz, Jr. won three races, guiding Carom to a victory in Race 3, leading the Brown-trained Orglandes to victory in the $150,000 Zagora in Race 4 and winning aboard Big Package in an allowance optional claiming race in Race 8 that proved to the be the difference in the standings.

The 29-year-old Ortiz, Jr. finished with a 33-35-28 record in 177 mounts with earnings of $3.56 million. His brother, Jose Ortiz, challenged him for supremacy up until the final race, finishing second with 32 wins while Saez, who won aboard Rockefeller in the Nashua (G3) in Race 9, was third with 31 wins.

“It feels great and it’s always special every time I win a title in New York,” Ortiz, Jr. said. “This is my hometown. I'm happy, I thank my owners, trainers, my agent for doing a great job and I'm also thankful to stay healthy."

“We always compete no matter what,” Ortiz, Jr. said. “We try to do our best out there so thankfully it paid off with hard work and dedication.”