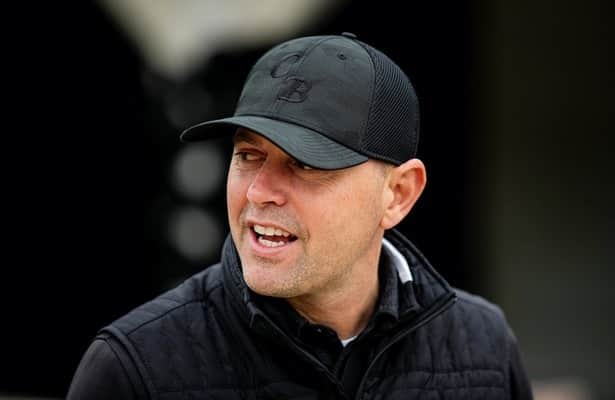 Klaravich Stables’ Domestic Spending, winner of the Grade 1 Manhattan last out, was one of multiple horses to breeze over the inner turf at Belmont Park for trainer Chad Brown on Sunday morning.

The 4-year-old son of Kingman went a half-mile in company with multiple graded stakes-placed Rockemperor completing his four-furlong move in 49.75 seconds over the firm turf.

“He worked in company with Rockemperor just stretching his legs,” Brown said. “He went an easy half-mile and I just wanted to get him out there and assess him. It was a very routine work. He looks super.”

Prior to capturing the Manhattan over good turf on June 5, Domestic Spending dead-heated for victory with Colonel Liam in the Grade 1 Old Forester Bourbon Turf Classic on May 1 at Churchill Downs.

In the Manhattan, Domestic Spending was 11 lengths back on the backstretch before displaying a devastating turn-of-foot to gun down graded stakes-winning stablemate Tribhuvan, winning by 2 3/4-lengths.

Brown said Domestic Spending remains on target for the Grade 1, $600,000 Mister D, formerly known as the Arlington Million, on August 14 at Arlington Park.

Also on the work tab was Master Piece, who finished a late-closing sixth in the Manhattan and went a half-mile in 48.62.

Brown said he will be hoping for a better performance next out from Juddmonte’s Pocket Square, who finished fifth as the beaten favorite in the Grade 1 Longines Just a Game on June 5.

The daughter of Night of Thunder blitzed through a half-mile with a bullet work in 48.05 – the fastest of 18 recorded works at the distance. She will be pointed for the Grade 1, $500,000 Diana on July 17 at Saratoga Race Course.

“Going into the Just a Game, she missed her final work with the rainstorms. I wasn’t able to get a few horses there that weekend,” Brown said. “In hindsight, it really affected her. She was flat in her race, and I think it was because of missing a work. I’m inclined to draw a line through that race and point her to the Diana.”

Michael Dubb, Sandford Goldfarb and Samuel Abraham’s Devamani logged his first work since capturing the Grade 3 Monmouth on June 5, travelling a half-mile in 48.75. He made his 2021 debut off nearly seven month’s rest, running fourth in the Grade 2 Fort Marcy on May 1 at Belmont Park.

Brown said the $100,000 Oceanport on August 8 at Monmouth Park is among a number of potential targets.

“He’s the kind of horse who benefits from a race to kind of get in form,” said Brown. “He looks fine. Not exactly sure what we’re going to do with him next. Going back to Monmouth for the Oceanport is one idea. We’ll also look at some other spots.”

Brown said undefeated Chilean-bred Breakpoint is nearing a North American debut. The son of Constitution is a two-time Group 1 winner in his native country and worked five furlongs in 1:00.60.

“He’s getting close to his first start,” Brown said. “We’re looking for a spot with him. He’s very close to getting started. He seems like a steady horse in his works.”

The bay sophomore daughter of Zoffany won the Group 3 Marble Hill last July in her native Ireland in her start prior to her first North American engagement.

“Her form looks good. She shouldn’t have any trouble with the mile. She wouldn’t mind some cut in the ground,” Brown said.

The bay Galileo filly broke her maiden at 1 ¼ miles on April 22 over the inner turf, defeating next-out winner Community Adjusted, and then defeated winners at the same distance on June 10.

“She’s got a pair of mile-and-a-quarter wins,” Brown said. “She doesn’t have any stakes credentials so she’s going to have to get into the field. If she does, I think she fits with those horses.”