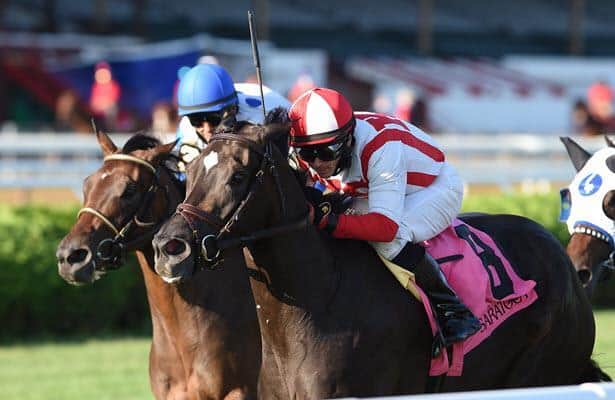 Klaravich Stables' Selflessly finished well back of Sweet Melania when running fifth in the Grade 3 Wonder Again in June the previous time the two faced each other. But Friday, the Chad Brown trainee got the better of her rival, overtaking her in the final jumps for a victory by a nose in the Grade 3, $100,000 Lake George for 3-year-old fillies at Saratoga Race Course.

After that effort in the one-mile Wonder Again at Belmont Park, Selflessly returned to the same distance at the Spa a fresh horse two months later. With David Cohen picking up the mount as Irad Ortiz, Jr. recovers from an injury, Selflessly tracked in fifth position as Windracer led the 10-horse field through the opening quarter-mile in 23.92 seconds and the half in 48.48 on the inner turf course labeled good.

Sweet Melania, the 3-5 favorite conditioned by Todd Pletcher, powered through an opening along the rail out of the final turn and was urged home by jockey Jose Ortiz. But the two-time graded stakes winner couldn't repel Selflessly, who Cohen angled out slightly to Sweet Melania's outside, gaining ground in the final sixteenth before getting up just ahead of hitting the wire in a final time of 1:36.06.

"We were happy to get a good trip behind the horse [Sweet Melania] I thought would take us the whole way," said Cohen, who won his first graded stakes since 2018 and first at Saratoga since the 2012 Travers when he piloted Golden Ticket to a dead heat for first with Alpha. "You never really want to get stuck behind a horse that's going to back up into you. My filly really finished up strong and showed a lot of heart.

"Chad and I had the same idea," Cohen added. "We thought there would be two or three to go and we really wanted to get her out aggressively and not get shuffled back into the first turn and played it by ear.

"If Sweet Melania was on the lead and I was fortunate to get behind her then great she would take me the rest of the way and if not just figure it out from there. We went to Plan B and Plan C real quick," Cohen continued. "Everything got bottled up into that first turn and as Chad requested, if we didn't send her out of there strong, we would have been shuffled seven eight back and probably never have the chance to get up for the win."

The stretch drive featured a duel between the charges of the top-two leading trainers of the summer meet. With the win, Brown tied Pletcher for the top mark with 24 victories apiece. The 40-day meet has eight days remaining before closing on Labor Day, September 7.

Selflessly won her second graded stakes and first since capturing the Grade 2 Miss Grillo in September at Belmont. That preceded her fifth-place finish in the Grade 1 Breeders' Cup Juvenile Turf at Santa Anita to cap her 2-year-old year. After a seven-month break, the More Than Ready filly made her sophomore bow in the Wonder Again before returning to Saratoga for the first time since her runner-up debut effort a year to the date of the Lake George.

"The first race of the year I was a little disappointed watching the race unfold and when we got her back to the barn, she had some cuts on the backs of her legs. She missed some training after that race to heal up, so she probably had an excuse in there," Brown said. "My team at Belmont has had this horse all meet getting her ready and they really did a great job.

"David stepped in today when Irad couldn't ride and I'm really proud of him," Brown added. "He rode a great race and we were happy to put him on the horse. I use him occasionally and we certainly ride against him a lot. He rides particularly well on the turf saving ground."

"Some loyal Chad Brown fans made money today, for sure," Brown said about winning with a rare longshot at the Spa.

Sweet Melania, owned by Robert and Lawana Low, finished a half-length in front of Witez for second. The daughter of 2015 Triple Crown-winner American Pharoah has never finished off the board in eight starts, moving to 3-2-3.

"Todd handicapped the race really well and he thought the two outside horses had more speed than we did," Ortiz said. "In my mind, I was going to save when I break and those two went fast at the break, so it was easy for me to sit there. I sat very controlled the whole way around and had a good spot on the rail. She gave me a good run. The last couple of jumps, the other horse came to me, but she dug in and fought hard. It was a good race. Tough beat."

Live racing resumes Saturday at Saratoga with an action packed 11-race card which will feature four graded stakes races, including the  Grade 1, $300,000 Forego presented by America's Best Racing at seven furlongs over the main track, the Grade 1, $500,000 Sword Dancer going 1 ½ miles over the inner turf, the Grade 3, $100,000 Saranac for 3-year-olds going one mile over the inner turf and the Grade 2, $150,000 Amsterdam for 3-year-olds going six furlongs over the main track. First post is 1:10 p.m.

Kent Desormeaux, grateful to be back, looks for a win
One week into his return to the races, Kent Desorm...
x