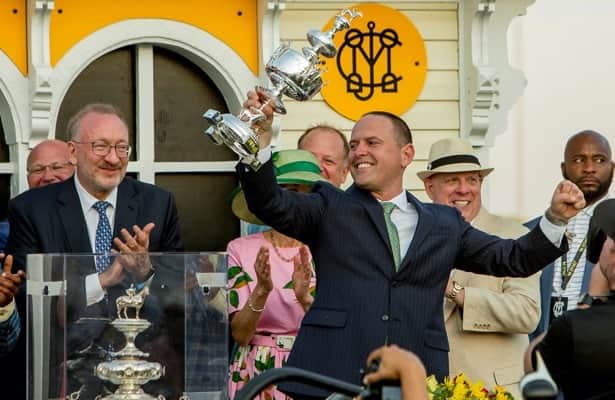 The legacy and importance to the sporting public intrinsically links the three legs of the Triple Crown. With Saturday’s 147th running of the Preakness Stakes at famed Pimlico, a plethora of media attention turned to the connection the middle jewel has with the upcoming Belmont Stakes on June 11.

With the Belmont Stakes – the oldest of the three American Classics, first run in 1867 with the first Preakness following suit in 1873 – there have been ample opportunities for the best crop of 3-year-olds to try and pull off the sweep, with 18 achieving the Preakness-Belmont double in addition to the famed 13 who added Kentucky Derby victories to achieve exalted Triple Crown status.

But there is a lesser-known connection between the Preakness and a prestigious and a historic New York race for sophomores. The Grade 2 Wood Memorial, inaugurated in 1925, has seen 12 horses pull off the Wood-Preakness double, with nine of those horses eventually earning enshrinement in the National Museum of Racing and Hall of Fame.

Klaravich Stables’ Early Voting would not have been part of the list regardless of the outcome of the 147th Preakness contested Saturday. But the trainee of four-time Eclipse Award-winner Chad Brown earned black type with a runner-up finish in this year’s edition of the Wood Memorial in April at Aqueduct and six weeks later gave Brown his second win in a Classic when he defeated favorite Epicenter by 1 1/4 lengths in the Preakness.

Brown, who earned his previous Triple Crown with fellow Klaravich-owned Cloud Computing in the 2017 Preakness, earned his second signature victory at Pimlico and saw Early Voting bolster the Wood’s reputation. The lightly raced Early Voting had made all three of his starts at the Big A and improved his Beyer Speed Figures each time, going from a 76 for his debut win Dec. 18 going one mile before commencing his 3-year-old year with a 4 1/2-length, gate-to-wire score in the 1 1/8-mile Withers (G3) in February, garnering an 87.

That set up the Gun Runner colt for the 1 1/8-mile Wood Memorial, where he finished just a neck behind Mo Donegal on April 9 for a 96 Beyer Speed Figure. After skipping the Kentucky Derby, Brown saw Early Voting break sharp from post 5 in the nine-horse field and outkick Kentucky Derby runner-up Epicenter, earning jockey Jose Ortiz his first Preakness victory. That allowed Early Voting to follow Cloud Computing in another facet, with the latter also earning black type in the Wood before winning the Preakness, running third five years ago.

“I’ve always felt that New York is a fine place to develop these kind of horses,” Brown said. “I’m very appreciative for NYRA and the facilities they offer us to train year-round at all their tracks, and we’ve developed several horses there.

“Cloud Computing was another horse that wintered up there,” Brown added. “Not only both of them running in the Wood, but they didn’t even go to Florida. It can be done, and I think it just depends on the horse and always just being aware of your environment where you are training these horses, and New York is a good environment.”

The Wood-Preakness connection developed a strong foundation in the earlier stages of the Wood’s history. From 1943 – when eventual Triple Crown winner Count Fleet accomplished the double – to 1967 with Damascus, there were seven horses to accomplish the feat. All seven of those winners are in the Hall of Fame, with Assault (1946), Hill Prince (1950), Native Dancer (1953), Nashua (1955), Bold Ruler (1957) and Damascus (1967) comprising a proverbial “Who’s Who” of all-time racing greats that demonstrated their talents across New York and Maryland. There has not been a Wood-Preakness double since Pleasant Colony in 1981.

American Pharoah in 2015 and Justify in 2018 won both the Preakness and Belmont in their respective Triple Crown runs. But the last pure Preakness-Belmont double remains Afleet Alex in 2005, a streak that could remain intact as Brown indicated he will likely map out a campaign that forgoes the Belmont Stakes and instead focuses on the $1.25 million Travers Stakes (G1) on Aug. 27 at Saratoga.

“Certainly a race like the Travers, I know it’s a tick further, but I don’t believe he will have any trouble getting the mile and a quarter,” Brown said. “But there will be some racing before that. We’ll get him back to Belmont, assess him, train him a bit, and then start to map out a campaign that hopefully leads us to the Midsummer Derby.”

Brown took to Twitter on Sunday morning to express his gratitude to all involved in preparing Early Voting for his Preakness success, saying, “Congratulations to our amazing team and horse, they did all the work! Also special thank you to owner Seth Klarman, Mike Ryan who recommended Early Voting as a yearling, and Niall Brennan who did his early training!”

Early Voting returned to Belmont on Sunday morning from Pimlico

“He’s back home at his base here at Belmont, we’re happy to have him back,” Brown said.

Early Voting’s Preakness triumph was icing on the cake for Klarman, who grew up just blocks away from Pimlico and celebrated his 65th birthday on Preakness Day.

“It was a very memorable day for him,” Brown said. “We’re so appreciative of all the business he gives us and for our team here in New York. It’s good to see a horse that trained at Belmont Park go on and do something great. We love being over here at NYRA at our year-round base of operations. My team and the horse deserve all the credit.”

Saturday’s victory completed a double on the Preakness card for Brown, Klarman and Ortiz, who combined with Technical Analysis for a gate-to-wire victory in the Gallorette (G3) for fillies and mares 3-years-old and up over the turf.

“She ran super. I don’t know where she’ll run next but I’m happy to see her move forward in her second start of the year,” Brown said.