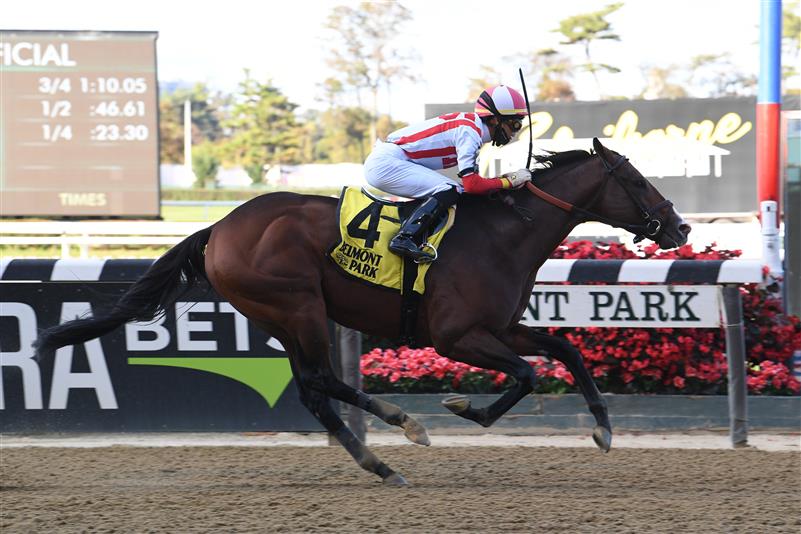 Four-time Eclipse Award-winning trainer Chad Brown worked a number of his baker's dozen of Breeders' Cup contenders over the weekend on dirt and turf at Belmont.

"I think our group is representative of the diversity of our team, being able to work with any kind of horse," said Brown, who has won 15 Breeders' Cup events. "This is the time to showcase not only your horses but your team's ability to get to the championship day for various owners out there to see."

Klaravich Stables' Complexity, last out winner of the Grade 2 Kelso at Belmont, worked a half-mile solo in 48.81 Sunday on Big Sandy after missing a work last week.

"He worked this morning and worked great," Brown said of the 2018 Champagne (G1) winner. "He will be pre-entered tomorrow as long as he comes out of it well."

A number of notables breezed on the Belmont inner turf Sunday, led by Rushing Fall and Sistercharlie, who worked five-eighths in 1:01.85.

"They're both training great. Rushing Fall has been a model of consistency all year in works and racing," said Brown. "Sistercharlie got started a little later than we wanted and was clearly a little rusty and out of form in her first start. In her second start, much improved and we decided to skip the Flower Bowl and go fresh.

"So far, that decision, based on her morning works, is clearly the right one," added Brown regarding Sistercharlie. "Her last two workouts have been her best two workouts of the year, I thought. She continues to train up to the race the right way."

My Sister Nat and Nay Lady Nay worked in company in 50.66 as they look to step up against their well-regarded stablemates.

"She worked well. I had her in 1:01 and change," noted Brown, who advised that Domestic Spending is targeting the nine-furlong Grade 1 Hollywood Derby.

Brown said Public Sector would benefit from an expected stronger pace in the Juvenile Turf.

"He's an improving horse. His maiden win was super impressive at Saratoga," said Brown. "In the Pilgrim, he got caught in a pace less race. He was really out of sorts that way. He needs some pace to run at. He would be better in a larger field and I like the cutback for him to a mile on a tighter track with even more going on in front of him.

"I'll pre-enter Editor At Large in the Juvenile Fillies Turf," added Brown. "She worked exceptional today, and I want to try and get her in the race if we can."

On Saturday, Reinvestment Risk, runner-up to Jackie's Warrior in both the Hopeful (G1) and Champagne (G1), worked a half-mile in 48.20 inside of maiden Miles D on the Belmont main.

"I wanted to make sure he kept his attention to business and it worked out really well," Brown said of the rail-skimming work. "He went with a promising maiden — Miles D — and they went well together. He's doing well, and we're going to go on to that race (Juvenile)."

Brown said Reinvestment Risk will appreciate the Keeneland main track after a disappointing effort in the Champagne last out at Belmont when 5 1/2 lengths in arrears to a runaway Jackie's Warrior.

"I just don't think he cared for the track particularly at Belmont that day," said Brown. "That said, the winner was super impressive, and it's hard to imagine anyone beating him even if he loved the track that day.

"He's come back and worked well and I think he'll appreciate a different surface at Keeneland," added Brown. "I have a feeling that track will play a little more like Saratoga."

Peter Brant's Grade 1 winner Dunbar Road, third last out in the Beldame (G2) at Belmont, worked five-eighths Saturday in 1:01.85 on the main track toward her second attempt at the Distaff following a fifth last year.

"Dunbar Road went solo yesterday, and she worked well and came out of it well. She's on target for the Distaff," said Brown.

Klaravich Stables' multiple Grade 1-winner Newspaperofrecord worked a half-mile in 48.40 Sunday on the Belmont main in preparation for a start in the Matriarch (G1), a one-mile turf event on Nov. 29 at Del Mar.

"She did a beautiful half mile on the dirt. She looked great," said Brown.