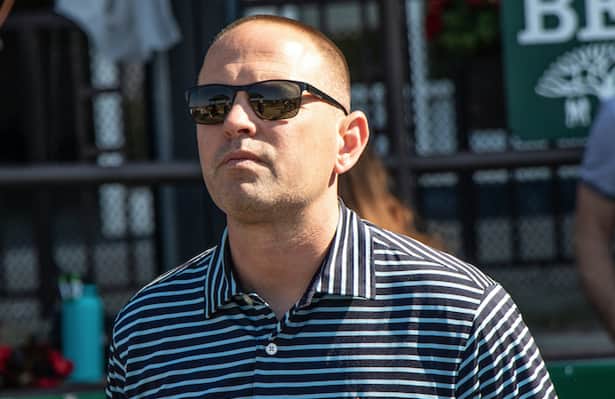 Trainer Chad Brown leads the Belmont Park spring/summer meet with a record of 121: 39-26-16 for meet-leading purse earnings of more than $4.8 million heading into Sunday's card.

The four-time Eclipse Award-winning conditioner swept both Saturday stakes – taking the Grade 2, $250,000 Mother Goose at 1 1/16 miles on dirt with Gerrymander and the $100,000 Wild Applause over the Widener turf with Eminent Victor – to increase his meet-leading stakes tally to 13.

His 39 wins include 22 on turf and 17 on dirt – both figures that lead the meet for the surface – which speaks to Brown’s dual-surface success.

As noted in the Daily Racing Form on Saturday, Brown is just five wins shy of David Jacobson's record 44 wins at the 2013 Belmont spring/summer meet, which was accomplished with 168 starters across a 56-day meet.

“My team has done a great job and so have my horses. They've really showed up,” Brown said. “My staff are unbelievable across all the divisions. Once again, they've stepped up and focused their talents day-to-day on executing their tasks and doing it at a high level.”

Brown, who won 32 races at last year’s Belmont spring/summer meet to secure his sixth consecutive title, said he is particularly proud that his 13 stakes wins this meet – of which 10 came on turf – are spread across seven riders, including Manny Franco (3), Flavien Prat (3), Irad Ortiz Jr. (2), Jose Ortiz (2) and one each for Eric Cancel, Trevor McCarthy and Joel Rosario, who piloted Gerrymander to victory Saturday.

“This is a deep, diverse group of horses and I’m so proud of their efforts. Several different members of the jockey colony have contributed, so it's nice to spread it out. It's such a talented group, and for a large number of them to have success with our horses is always gratifying,” Brown said.

But this year he could add to his lone main-track champion (Good Magic, 2017 2-year-old colt) with his talented trio of sophomore colts in Early Voting, Jack Christopher and Zandon.

Undefeated Jack Christopher captured the Pat Day Mile (G2) in his seasonal debut on the Kentucky Derby undercard at Churchill Downs and followed with a spectacular 10-length romp last out in the Woody Stephens (G1) at Belmont that garnered a career-best 107 Beyer Speed Figure.

Owned by Jim Bakke, Gerald Isbister, Coolmore Stud and Peter Brant, Jack Christopher breezed a half-mile Saturday in 49.49 seconds over Big Sandy in preparation for his first two-turn test in the Haskell (G1) on July 23 at Monmouth Park.

Zandon won the Blue Grass (G1) in April at Keeneland ahead of a third-place finish in the Kentucky Derby last out. Owned by Jeff Drown, he worked a half-mile solo in 48.41 Sunday over the main track in preparation for a start in the $600,000 Jim Dandy (G2) on July 30 at Saratoga Race Course.

Early Voting, last-out winner of the Preakness, worked five-eighths in company with multiple graded-stakes placed 4-year-old Highly Motivated in 1:01.05 over the Belmont main track Sunday. Owned by Klaravich Stables, he launched his sophomore season at Aqueduct Racetrack by winning the Withers (G3) in February ahead of a neck loss to eventual Belmont Stakes champ Mo Donegal in the Wood Memorial (G2). A decision on a next start for Early Voting has not yet been decided.

Although Brown has enjoyed many past success stories on dirt, including a win in the 2017 Preakness with Cloud Computing and a trio of Champagne (G1) winners in Practical Joke (2016), Complexity (2018) and Jack Christopher last year, the conditioner admitted he is reaching new main-track prominence with his current group.

“It really depends on what you have in your crop. My feeling is that we're so dominant on the turf consistently since arriving in New York that that's always the first thing people are going to look at,” Brown said. “But when you look back over the years, it's not just this crop – we've had dirt horses in the past. But I do understand it's more obvious this year, having maybe three of the top five dirt colts in the country. I know we haven't had this many in a crop – that's fair – but it all depends what you have. When you don't have them all in the same crop, it may not be as apparent that my team's skilled at training dirt horses just as well as turf horses.”

Brown said he was pleased with the works from both star dirt colts Sunday. “Zandon worked great. It was a maintenance move and he is on target for the Jim Dandy.”

He said Early Voting’s breeze was “a nice solid work to keep maintaining where he is at, and that's what we got. His next start is between the Haskell or the Jim Dandy.”

Brown added to his dirt credentials Saturday with Gerrymander’s three-length Mother Goose score, which garnered a career-best 95 Beyer as the sophomore filly made the grade. The Into Mischief bay, out of the graded-stakes placed Hard Spun mare Ruby Lips, is a half-sister to multiple graded-stakes winning marathoner Lone Rock.

Gerrymander, winner of the nine-furlong Tempted in November at Belmont, entered Saturday’s test from an off-the-board effort in the Eight Belles (G2) on May 6 at Churchill.

“She had been training great all winter,” Brown said. “She had one minor setback that cost us some time, but we got back on track. The race at Churchill just didn't work out for her. It was a wet track and kind of a quick seven-eighths (stuck) down on the inside and she just never picked her feet up. We brought her back to Belmont and she trained brilliant going into this race.”

Eminent Victor registered a career-best 88 Beyer for her half-length score over stablemate Oakhurst in the one-mile Wild Applause.

“I'm not sure what we'll do with her yet – if we'll try the Saratoga Oaks or wait for the Lake Placid,” Brown said.

Brown breezed 10 horses over the Belmont inner turf on Sunday, including multiple Grade 1-winner Regal Glory, who worked a half-mile in company in 49.02 with graded-stakes winner In Italian (49.05).

Regal Glory, a 6-year-old Animal Kingdom mare, captured the Just a Game (G1) last out for owner Peter Brant. She is targeting the $500,000 Fourstardave (G1) on Aug. 13 at Saratoga, which offers a "win and you’re in" berth to the Breeders’ Cup Mile.

“They looked good,” Brown said. “Regal Glory will go to the Fourstardave. I'm not sure with In Italian yet, but she's possible for the Diana.”

Brant’s In Italian, a gate-to-wire winner of the Honey Fox (G3) in March at Gulfstream, pressed the pace of Leggs Galore last out in the Just a Game, finishing third.

“She's very good. She got caught up in a bit of a pace duel last time,” Brown said. “If she's able to relax and be clear on the lead, she's dangerous.”

Highest Honors, a 6-year-old son of Tapit and W.S. Farish homebred, is targeting the 12-furlong $150,000 Grand Couturier on July 4. Napoleonic War, runner-up last out in the Pennine Ridge (G2) on June 4 at Belmont, will start in the 10-furlong $1 million Belmont Derby Invitational (G1) for sophomores on July 9.

Adhano, a Group 3 winner in Europe owned by Madaket Stables, Michael Dubb and Louis Lazzinnaro, finished a closing second last out in the Manhattan (G1). The 4-year-old Intello colt worked a half-mile in 49.96 with Tokyo Gold, a 4-year-old Kendargent colt, who was transferred to Brown after finishing 10th in the Manhattan.

Brown said Adhamo will stretch out for the 11-furlong United Nations (G1) on July 23 at Monmouth.

“Adhamo is pointing to the United Nations. With Tokyo Gold, I'm just getting to know the horse. He'll probably run next up at Saratoga,” Brown said. “Adhamo is a nice-training horse. I thought he ran well last time. He had a bit of a troubled trip with no pace in the Manhattan. He's developing into a top horse.”

Rockemperor, winner of the Joe Hirsch Turf Classic (G1) in October at Belmont, finished fifth last out in the Manhattan. Owned by Madaket Stables, Dubb, Wonder Stables, Michael Kisber and Caruso, breezed a half-mile in 48.85 solo with an eye toward the Grand Couturier or the 11-furlong, $250,000 Bowling Green (G3) on July 31 at the Spa.

“I’m not sure if I'll wheel him back on short rest in the Grand Couturier or just wait for the Bowling Green,” Brown said. “He looked great this morning. It's very important he gets firm turf.”

Brown said the Turf Triple series, which offers $5.1 million in combined purses across six races, is going to be very competitive.

“It's a nice addition to the schedule and I’m just happy to once again have horses that are participating,” Brown said. “Both fillies worked great and are on target for the Oaks.”

The 44-day Belmont meet concludes on July 10. Brown soon will look to add to his riches at Saratoga, where last year he registered his fourth H. Allen Jerkens award as top trainer with 41 wins and his third in the last four meets. The Mechanicville, N.Y., native set a Spa meet record for conditioners with 46 wins in 2018 and he said he’s already looking forward to the challenge.

“It's a super competitive meet and there’s not a lot of room for error up there. Hopefully, we have good weather and a good meet,” Brown said.