Brown has a case with Highly Motivated in Kentucky Derby 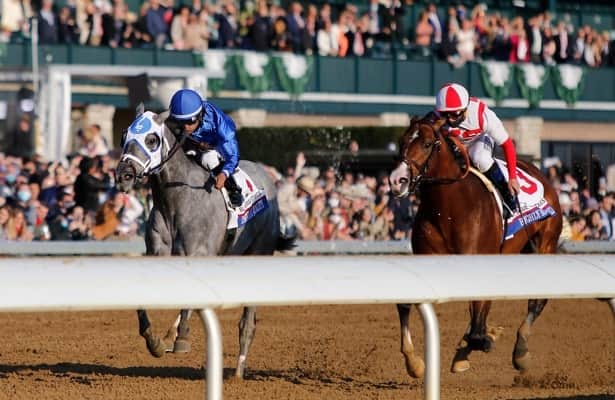 Four strides. They are all that separated Highly Motivated from pulling off the most important upset of the 2021 Kentucky Derby prep season.

Those four strides nearly three weeks ago in the Blue Grass Stakes (G2) also provide trainer Chad Brown both the incentive and the optimism that his colt can turn the tables on undefeated Essential Quality – and do it on the biggest stage American racing has to offer.

“He did run a terrific race in the Blue Grass coming up just short to the Derby favorite,” Brown said Wednesday against a snowy backdrop at his Churchill Downs barn. “I think it gives him a good shot in the Derby. I’d say he’d be one of the main contenders.”

It was not just that loss by only a neck at Keeneland. Statistical optics add to the case that Highly Motivated is right there. Both he and Essential Quality were given career-high Beyer Speed Figures of 97 for the Blue Grass. They shared a BRIS Speed Rating of 102, also career-bests. In the case of Highly Motivated, it was the third time in a row he reached a 102 BRIS.

The closing fractions for both horses also suggested they can extend the momentum from the end of that 1 1/8-mile race into a competitive last furlong in the 1 1/4-mile Derby. With 13.0 and 38.0 seconds a historic benchmark for the last furlong and three furlongs, Essential Quality closed the Blue Grass in 12.0 and 36.3. Highly Motivated did it in 12.5 and 36.7.

“It was nice to see this horse come home that last quarter the way he did in a mile-and-an-eighth race his first time around two turns,” Brown said. “It was quite a relief. It gives us a lot of confidence that this horse is not going to have a problem going a mile-and-a-quarter.”

The sense of relief Brown got from the fractions and the figs is all too familiar for trainers exploring the mystery of added distance with each ensuing race for top-level 3-year-olds.

“You may have a very good idea of the outcome, but they have to do it,” he said. “We’re not always right. If any trainer tells you they are, they’re not telling you the truth. You learn more every day that you’re doing this, so we had a lot of confidence. But you don’t know for sure until you see. I’m not surprised he came home that last quarter in that time, but it was quite a relief to see it.”

Brown will feel the pins and needles of uncertainty all over again May 1. But who doesn’t? No one really knows what will unfold in those extra 220 yards. Brown agonized over the extra distance in 2018, when Good Magic could not close on Justify but still finished second for the best result he has had with five Derby horses.

For now Brown is pleased with what he has seen from Highly Motivated, who has a maiden win, a stakes win and three losses by only a combined two lengths. He also had a bullet work at Keeneland last weekend and is scheduled to have a final pre-Derby breeze at Churchill Downs on Saturday, weather permitting.

Highly Motivated also has championship bloodlines. Bred and owned by Seth Klarman, he is by Into Mischief, who also sired 2020 horse of the year Authentic.

“He’s one of the greatest dirt stallions of this decade for sure,” said Brown, the four-time Eclipse Award winner as America’s top trainer from 2016 to 2019. “He’s starting to show his versatility in distance and surface. It does give a lot more confidence that he had a Derby winner last year, that they can get the mile-and-a-quarter distance.”

More than charts and stats and pedigree, though, is the look of the horse. Highly Motivated is not just any bay colt. He is hard to miss among the ever-growing horse population at Churchill Downs.

“He’s a big monster when you look at him,” Brown said. “A very impressive horse. The physical tools add to that confidence that he’ll get the distance.”

Strategically, Brown hopes and expects another horse will do the heavy lifting in establishing early speed in the Derby. He did not mention likely pacesetter Caddo River, a stablemate of Essential Quality from the Brad Cox stable. Identified or not, another horse would provide jockey Javier Castellano and Highly Motivated that luxury of a target that they did not have in the Blue Grass, where they led almost the entire race.

“If he’s not on the lead doing all he work,” Brown said, “I think he’s got a better chance to get that mile-and-a-quarter distance.”

To get that last furlong. And those last four strides.

Will that be enough to give Brown his first Kentucky Derby victory? As he put it, “It’s a question mark.”