Brown confirms Early Voting is out of Kentucky Derby 2022 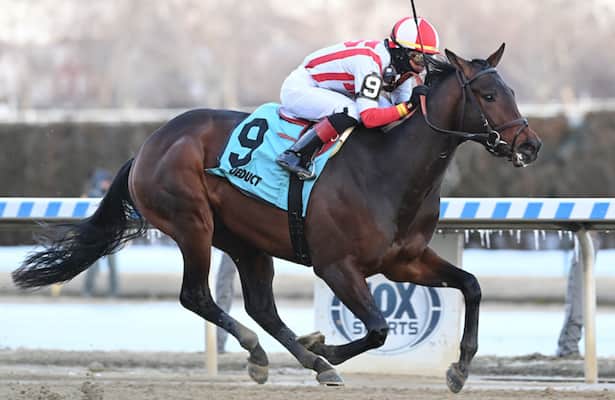 Early Voting, most recently second in the Wood Memorial (G2), will bypass the Kentucky Derby and instead point to the Preakness Stakes (G1) at Pimlico Race Course on May 21, trainer Chad Brown confirmed from Churchill Downs Sunday morning.

Brown previously stated he was leaning toward skipping the first leg of the Triple Crown with Early Voting even though the son of Gun Runner ranked 15th on the Kentucky Derby leaderboard by virtue of his victory in the Withers Stakes (G3) and subsequent runner-up effort in the Wood Memorial. The four-time Eclipse Award winning trainer reiterated Sunday that he thought the 10-furlong classic would be asking too much too soon of the dark bay colt with three career starts to his credit.

Get free Brisnet past performances for Kentucky Derby 2022.

“We weren’t likely to come (to the Derby with him) but we wanted to leave our options open and just see if there were any major defectors from the race that could change maybe the pace of the race,” Brown said. “As long as the field is staying the way it is, we’re going to stick with our original plan. He’s a lightly raced horse who hadn’t had any real experience with challenging trips or anything like that. To throw him into deep water with a 20-horse field, at this point in time with him, I don’t think it's the right thing. We’re excited about his chances in the Preakness.”

Owned by Klaravich Stables, Early Voting won the Withers in gate-to-wire fashion by 4 1/2 lengths and was beaten a neck by Mo Donegal in the Wood after setting the pace in that 1 1/8-mile test.

“We’re looking down the road with him, and the Preakness on six weeks rest looks like it will set it up for him just fine,” Brown said. “If he takes another step forward, he’s going to be very competitive in that race.”

Brown will still be represented in the Kentucky Derby by Zandon, winner of the Blue Grass Stakes (G1) at Keeneland on April 9.

With Early Voting not shipping in from New York, the Todd Pletcher-trained Pioneer of Medina moves into the Derby field, joining his stablemates Mo Donegal and Charge It. The son of Pioneerof the Nile finished fourth in the Feb. 19 Risen Star Stakes (G2) and third in the Twinspires.com Louisiana Derby (G2) on March 26 and worked a half-mile in 47.40 seconds in company with Charge It at Churchill Downs on April 30.

“He’s trained super since he’s been here, and his form has held up well from the prep races he’s been running in,” said Pletcher, adding that a decision on who will ride Pioneer of Medina is pending. “Now we just need to line up a jockey.”

With trainer Kelly Breen ruling out the possible entry of In Due Time, the D. Wayne Lukas-trained Ethereal Road would be next into the Derby field if there were another defection.

Favored Olympiad powers to victory in the Stephen Foster
Olympiad  tracked a quick pace, grabbed the lead a...

Life Is Good draws off to win the John A. Nerud
Elmont, N.Y. Trainer Todd Pletcher was every bit a...

Charge It dominates with 23-length win in Belmont's Dwyer
Charge It made amends for his last out 17th-place...