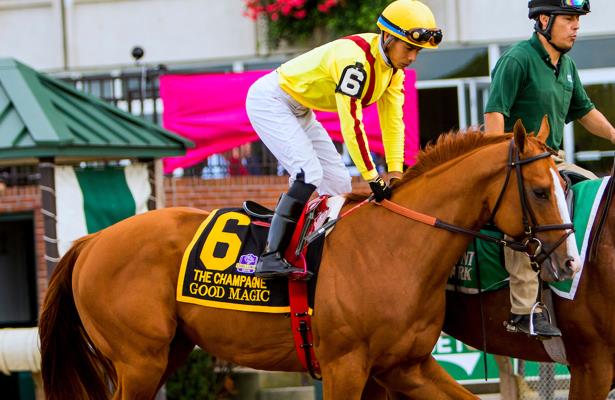 In terms of what he can control, Brown told Blood-Horse Daily for Wednesday’s cover story he has started plotting 3-year-old campaigns for his top juveniles.

With Good Magic, who broke his maiden in the Breeders’ Cup but had already run second in another get Grade 1, the Champagne Stakes, Brown envisions two preps before the 2018 Kentucky Derby.

“I won't say where to leave myself the option of running twice at Gulfstream (Park), but that's probably unlikely,” Brown told the Blood-Horse.

Owned by e5 Racing in a partnership with breeder Stonestreet Farms, Good Magic is back home in Kentucky and will return to Brown’s Florida string before the New Year. The son of Curlin is likely to run one race at Gulfstream Park — the Grade 2, $350,000 Holy Bull is Feb. 3 — before going elsewhere for another race before the Kentucky Derby.

Brown has used both the Grade 2 Wood Memorial at Aqueduct and Keeneland’s Grade 2 Blue Grass Stakes in years past as final preps.

"One thing I can say for sure is that I'm not basing his preparation for the Derby on the grade of the races,” Brown told the Blood-Horse. “He’s already a Grade 1 winner, and the big prize is the Kentucky Derby. I want to get him to the Derby ready to run the race of his life on Derby Day. My concern is which bridge to use to have him ready to run his best figure.”

As for Rushing Fall, the path will be a familiar one followed by the legendary Lady Eli during her 3-year-old campaign. She should return to the races in Keeneland’s Grade 3 Appalachian and target the Grade 1 Belmont Oaks Invitational later that summer.

One other horse on the rise from Brown’s barn is Analyze It, the eye-catching winner of Del Mar’s Grade 3 Cecil B. DeMille Stakes on closing weekend at the San Diego track. That victory, as with the colt’s winning debut at Belmont Park, came on turf.

"So far, he hasn't given me the feel that he'll be as effective on the dirt,” Brown said, “but I'll investigate it more in his works.”