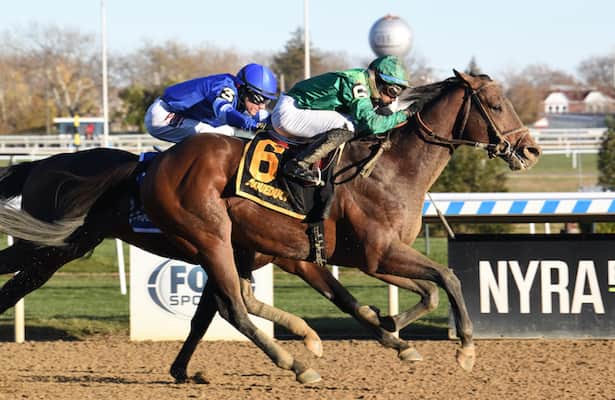 “I’m not one to send my horses to other continents to run. I like to stick to my circuits. But that race has been on my mind with the right style of horse,” Brown said. “This might be the kind of horse that fits for me trying one of those races. Although he’s had a couple of hard races, he is lightly raced. If you look at his record, he hasn’t had that many starts. He didn’t have to do battle in the Triple Crown, and he doesn’t have a ton of miles on him.”

Miles D sports a consistent ledger of 6: 3-1-1, including stakes placings at Saratoga in his sire’s namesake race on July 30 at Saratoga Race Course en route to a third in the Travers (G1) on Aug. 28.

“I have to talk to the owners about it. I’m not really sure,” Brown said. “I’m not so much interested in the Pegasus against those two horses. I’ll get him down there and see. There’s definitely a pace scenario to consider as well. If I race in big races in the wintertime, it’s horses that are lightly raced. With horses that have had long campaigns, I don’t care how much money they offer me at any track. I don’t really run them too much. This horse, there’s a possibility that we keep on going with him.”

Brown said Miles D could be a force to be reckoned with next year in the older horse division.

“If he takes another step forward next year, runs in all the handicap races and has success in one or more of them, he has a lot of stallion potential. Races like the Whitney or the Jockey Club are ones that would matter to me quite a bit,” Brown said.

Miles D was fourth on debut last October at Belmont in what turned out to be a key maiden race, finishing behind Speaker’s Corner as well as subsequent stakes winners Caddo River and Greatest Honour.

Brown credited his team and owners for allowing a patient approach with the horse.

“It’s taken a lot of patience by our team and our two owners. They never questioned giving him a little time,” Brown said.

Named after the late influential jazz musician Miles Davis, Miles D is out of the unraced Bernardini broodmare Sound the Trumpets, whose first dam is multiple Grade 1-winning millionaire My Flag and second dam is undefeated Hall of Fame champion Personal Ensign. Miles D was acquired for $470,000 from the Denali Stud consignment at the 2019 Keeneland September Yearling Sale.

Brown went on to report that Klaravich Stables’ Forced Ranking will not make this Saturday’s Remsen (G2) at Aqueduct after spiking a temperature. But he still will saddle Jeff Drown’s maiden winner Zandon, who breezed a half-mile in 49.82 Sunday over the Belmont dirt training track.