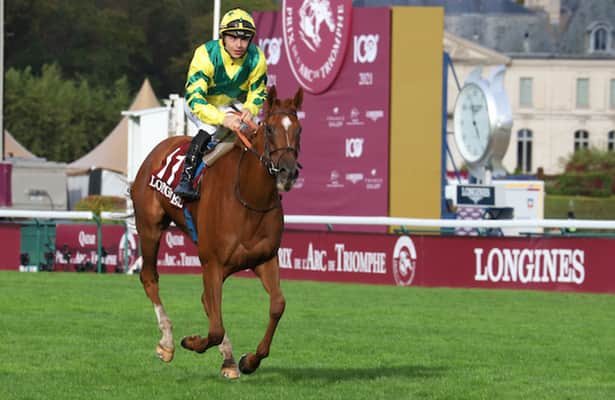 Rougier, a Group 1 winner, will make her first start for owner Peter Brant and Brown after she was purchased for $3,393,043 at the Arqana Breeding Stock Sale in December.

Rougir, a 4-year-old French-bred daughter of Territories, was last seen finishing seventh in the Breeders’ Cup Filly and Mare Turf in November at Del Mar.

Rougir began her career in her native France with trainer Cedric Rossi and broke her maiden on debut in June 2020 over good-soft going at Chantilly. She earned her first group victory with a determined neck win in the Group 3 Prix des Reservoirs at Deauville.

The chestnut went on to take a thrilling edition of the 1 1/4-mile Prix de l’Opera (G1) over heavy turf at Longchamp, tracking near the back of the field of 14 and making up ground under Maxime Guyon throughout the final two furlongs. Rougir got up just in time to land a nose victory over Grand Glory, punching her ticket to the Breeders’ Cup for her stateside debut. She could manage only a seventh-place finish in the Filly and Mare Turf after racing between rivals, going five wide in the turn and coming up empty down the stretch.

Lemista and Rougir breezed five furlongs in company in 1:02.40 Friday over the Belmont inner turf.

“She’s been training very well,” Brown said. “We took the winter to get her acclimated and such and she’s been coming along nicely. We know that she has some good form last year and it looked like maybe she needed a break after a long campaign. We gave her extra time and brought her along slow. Her last string of works have been impressive and she has a nice turn of foot.”

Brown said that Rougir is likely to stretch out going forward this year.

“It might be a touch short for her, but it’s a starting point,” Brown said.

Brant and Brown will also send out multiple group winner Lemista, who finished second in last year’s Beaugay a half-length behind Harvey’s Lil Goil. Previously trained by G.M. Lyons, the Irish-bred daughter of Raven’s Pass broke her maiden in October 2019 en route to three consecutive stakes victories in the Park Express (G3) over heavy turf at Naas, the Victor McCalmont Memorial at Gowran Park and the Kilboy Estate (G2) at the Curragh.

Lemista has made three starts for Brown since making her way overseas last year, including her runner-up Beaugay effort and a third-place finish in the Beverly D (G1) last out on Aug. 14 at Arlington where she stalked in fourth and put in a mild bid for show honors.

“This filly has come along well. She got sick on us after the Beverly D,” Brown said. “When she returned home from Arlington she had to go to the shelf for a while, so we took our time and brought her back and she’s another one that’s been training well.”

Plum Ali began her 4-year-old campaign with a gutsy win in the one-mile Plenty of Grace on April 16 at Aqueduct Racetrack, racing from off the pace under regular rider Manny Franco and unleashing a powerful run down the stretch to land a half-length victory over multiple graded stakes winner Technical Analysis.

The daughter of First Samurai flashed her talent as a juvenile, winning her first three starts that included the Mint Juvenile Fillies at Kentucky Downs and the Miss Grillo (G2) at Belmont over firm going in her graded stakes debut. She closed out 2020 with a fifth-place finish in the Breeders’ Cup Juvenile Fillies Turf at Keeneland.

Plum Ali continued to perform at the graded level in 2021 but struggled to find the winner’s circle in facing difficult trips and was forced wide in three of her seven sophomore starts. Despite her traffic troubles, the chestnut earned graded placings with a game third-place finish in the Grade 2 Appalachian at Keeneland over good going and a close runner-up effort in the Grade 3 Wonder Again at Belmont where she was defeated a half-length by multiple graded stakes winner Con Lima.

Clement said Plum Ali continues to train well and that he is hopeful she will show good form this year.

“I’d like her to have a career at the stakes level where she can be competitive,” said Clement. “It’s not easy because it’s a competitive division and there are a lot of very good horses.”

Woodford Racing and Team D’s High Opinion is still in search of her first graded victory after earning two placings last year for trainer Tony Dutrow. The 5-year-old Lemon Drop Kid mare enters from a fourth-place finish in a six-furlong optional claiming race on April 16 where she closed from seventh to be defeated just 1 1/4 lengths in her seasonal debut.

High Opinion showed consistent form in 2021, finishing on-the-board in 5-of-6 starts, including an allowance victory and a gritty nose defeat to Grade 1 winner Viadera in the 1 1/16-mile Ballston Spa (G2) in August at Saratoga Race Course. She followed with another graded placing when finishing second to Shifty She by 1 1/2 lengths in the Noble Damsel (G3) in October at Belmont to close out the year.

Dutrow said cutting the bay back to sprinting for her seasonal debut helped to get her started.

“We didn’t get the exact race we were hoping for last time. The better races just didn’t have enough horses for them in March,” said Dutrow. “But we got a race in her going short and that got her started. She’s doing excellent and we’re hoping that she runs on Saturday like she’s always done in the past. I don’t have any excuses for her but she’s ready.”

“She’s taken on better horses before and run well, so we’ll see what happens,” said Dutrow.

Annette Allen’s Stolen Holiday will make her graded stakes debut for Hall of Fame trainer Shug McGaughey after a last out runner-up effort in the 1 1/16-mile Sand Springs on April 2 at Gulfstream Park. The 5-year-old War Front mare tracked the pace in third under Hall of Famer Javier Castellano before shuffling back to fourth and making a run for the lead down the stretch to come up 2 3/4 lengths short.

The bay kicked the year off with a dominant 6 1/4-length optional claiming score going one-mile over the firm lawn on Feb. 23 at Tampa Bay Downs, leading at each point of call and stopping the clock in 1:33.89.

Castellano has the call from post 3 for McGaughey, who is looking for his third Beaugay win.