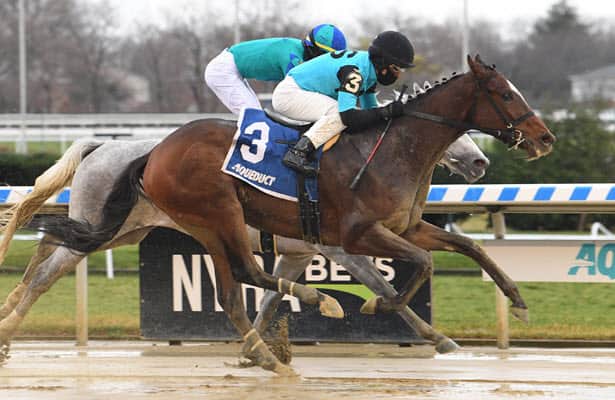 In a furious two-horse duel down the stretch, New York-bred Brooklyn Strong refused to to be denied when prevailing over Ten for Ten in the $150,000 Remsen Stakes (G2) for 2-year-old males at Aqueduct on Saturday.

Coming out of the gate, it was 6-5 favorite Ten for Ten and Jose Ortiz who went to the early lead, where they remained through moderate opening fractions in the 1 1/8-mile Kentucky Derby prep.

Brooklyn Strong and Joel Rosario began to improve their position on the second turn and had closed to within a half length of the leader at the eighth pole. The two traded the lead back and forth in the final furlong, but in the end it was the Daniel Velazquez-trained Brooklyn Strong who earned the win by a neck.

“He was responding to me and I didn't know how much horse I had, but I felt like we were moving very well,” Rosario said. “I was confident he would keep moving forward. I had to ride him a little bit.”

Brooklyn Strong, who paid $16.20 as the 7-1 fourth choice in a five-horse field, earned 10 qualifying points on the road to the Kentucky Derby. Ten for Ten collected four points, while Known Agenda (2 points) and Pickin' Time (1 points) completed the superfecta.

The Remsen win was the first graded stakes victory for Velazquez, who has been training since 2009 and has never had a Kentucky Derby starter.

A mere $5,000 purchase by owner Mark Schwartz at this year's OBS April 2-year-olds in training sale, Brooklyn Strong entered off a win in the one-mile Sleepy Hollow Stakes on Oct. 24 at Belmont Park.

“I was very confident going in,” Velazquez said. “I knew the distance was key and I was confident about the off track. I was happy with his performance. He really dug in. Today was a big showcase for him against tougher competition and I couldn't be happier.”

The son of Wicked Strong out of the Medaglia d'Oro mare Riviera Chic improves to 3-0-1 in four starts with earnings of $195,000. All three of Brooklyn Strong's wins have come at a mile or more, with his only shorter attempt being a third-place finish in the Bertram F. Bongard for New York-breds at Belmont.

“We'll come back healthy and then start picking our spots," Velazquez said of Brooklyn Strong's future plans. "This is a big prep for the Derby moving forward. Now, we're definitely Derby dreaming.”