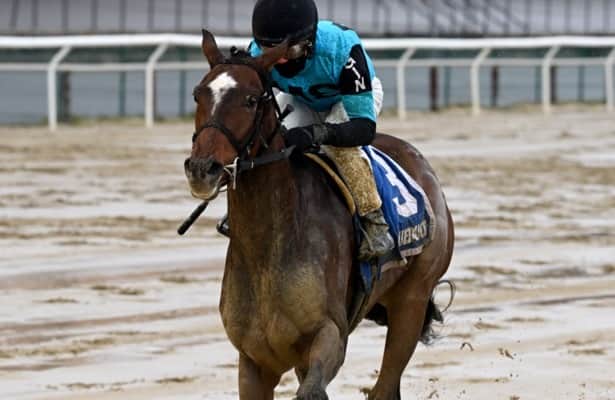 Majority owner Mark Schwartz never imagined his pursuit of a “decent horse” would lead to a Kentucky Derby prospect.

That is the almost surreal reality for the 67-year-old retiree after Brooklyn Strong, a $5,000 purchase at the Ocala Breeders’ Sale as a 2-year-old in training, staged a gallant rally and stuck his neck in front of Ten for Ten to win the Remsen Stakes (G2) on Saturday at Aqueduct Racetrack.

The gelded son of multiple graded-stakes winner Wicked Strong earned 10 Derby qualifying points when he turned the 1 1/8-mile Remsen into his third career victory in four starts. His earnings ballooned to $195,000.

“Oh my God, you’ve got to pinch me. It’s like you’re dreaming, it really is,” said Schwartz. “I never thought I would be in this position.”

Neither did trainer Daniel Velazquez, 36, who notched his first graded-stakes triumph in the Remsen. “My family, my crew, we’re all like, ‘What is going on?’ ” Velazquez said. “We almost can’t believe it.”

Velazquez is in a better position than most to understand the improbability of it all. His father, Alfredo, is a semi-retired trainer at Gulfstream Park. The well-respected Alfredo toiled for decades without getting a sniff at the Run for the Roses.

Schwartz has owned horses for the last seven years. He was drawn to New York-bred Brooklyn Strong by his breeding — Riviera Chic, the dam, is by Medaglia d’Oro — and by the juvenile’s breeze time of 10 2/5 seconds.

Schwartz never budged when the bidding opened at $50,000. Neither did anyone else. Try as he might, the auctioneer was unable to generate any action until the asking price plummeted to $1,000. Schwartz raised his hand at $2,000, then again at $5,000. To his disbelief, the hammer fell there.

The price was so low as to possibly create alarm. What could be wrong?

“The vet report had some minor stuff on it,” Schwartz said.

He sent photos of his new purchase to Velazquez, who also studied a replay of the breeze. The trainer accepted an offer to take a 33 percent stake in the gelding.

“My father always told me it’s good to have a little more skin in the game,” he said, adding, “He’s got good bloodlines. What’s the worst that could happen for $5,000?”

Velazquez has been training on his own since 2016. He has been overseeing about 20 horses at Delaware Park and has built a reputation on his ability to improve claiming horses that faltered elsewhere. He also makes it a point to keep an open mind about all of his 2-year-olds when they enter the barn.

“I don’t care if the owner paid $1 million or $5,000. I take the horses and I train them all the same,” he said. “We work and progress and I see who is beating who in the morning. This horse just kept beating everybody in the morning.”

Still, the connections were willing to make Brooklyn Strong available for $40,000 when he debuted in a Sept. 12 race at one mile at Delaware Park. He signaled his readiness for much stiffer competition with an authoritative 3-length score.

He took on fellow New York-breds in his next two starts. He rebounded from a wide trip and a third-place finish in the Oct. 2 Bertram F. Bongard to win the Sleepy Hollow Stakes on Oct. 2. That led to the huge test that the Remsen represented. Brooklyn Strong welcomed the sloppy, sealed track and the distance with a perfectly timed ride by Joel Rosario.

“I thought the distance was key. He showed us he could do it,” Velazquez said. “I loved the way he grinded it out from the top of the stretch.”

He said Brooklyn Strong came out of the Remsen well. He plans to freshen him and mentioned the Feb. 6 Withers or the March 6 Gotham, both at Aqueduct, as possible targets. Both offer qualifying points on the Road to the Kentucky Derby.

“He has a boatload of talent. Nobody has seen it yet,” Velazquez said. “He’s about to explode on the scene.”

Perhaps he already has.