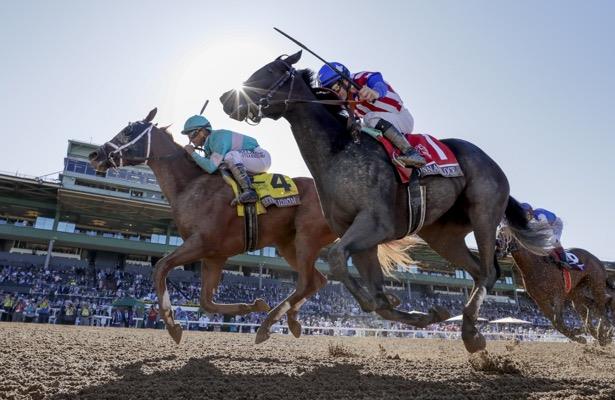 Mired near the back of the pack, British Idiom began a serious charge at the 3/8 pole, then proceeded to mow down the flashy debut winner — and 2-1 race favorite — Donna Veloce.

With the final time 1:47.07 following swift opening fractions of 22.71 and 46.02 seconds, the Brad Cox-trained British Idiom just eked out a victory outside of her rival by a neck.

“That was an intense stretch duel,” Cox said, “and I’m glad we came out on top.”

Javier Castellano rode the daughter of Flashback, who entered off a dominant score in Keeneland’s Grade 1 Alcibiades and is now 3-for-3 in her young career.

“Going up the backside, Javier was kind of knuckling down on her,” Cox said. “They went quick up front. She didn’t get tired. She just stays on and she’s got a great mindset. She takes everything in and never gets too worked up.

“I think the mind’s the best thing she’s going for her. She’s got a fantastic mind.”

Two lengths behind the top two, Bast filled out the board after pressuring leader Two Sixty into submission, then ending up leg-weary in the stretch. Perfect Alibi ran fourth.

“To do it with a juvenile is special,” Cox said. “To have a 2-year-old accomplish as much as she has in such a short period of time, it’s an amazing thing. She’s an amazing filly.”

Donna Veloce’s start Friday was just the second of her career. The Simon Callaghan-trained Uncle Mo filly debuted over the same Santa Anita track Sept. 28 with a 9 ¼-length score.

“She ran terrific," Callaghan said. "You can’t ask for much more. She didn’t win, but she ran a courageous race and that’s all you can ask. The race unfolded the way it did. I think Flavien (Prat) did the right thing and went outside of them and she ran great.”

"She did not want to quit," Baffert said. "She went five lengths too fast early. Otherwise I really think she would have been right there. She showed a lot of guts. She gutted it out to hang on in there.

"The quality is there. It was good race. These are good fillies.”

British Idiom, Donna Veloce, Bast and Perfect Alibi all claimed points Friday on the 2020 Road to the Kentucky Oaks. British Idiom’s victory paid 20 points, putting her atop the early leaderboard.