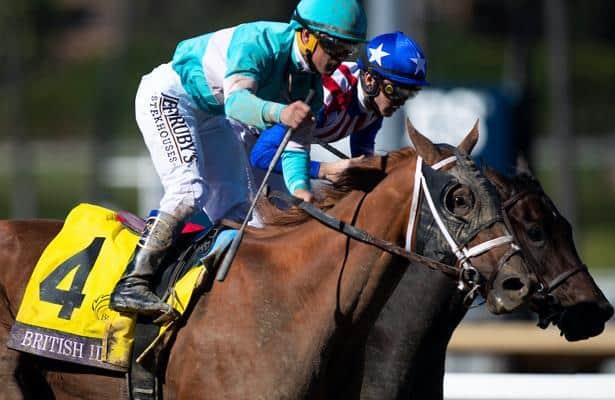 Coming off a monster year in which his stable runners earned a career-best $17,547,123, trainer Brad Cox is plotting a course to even more success in 2020.

British Idiom, who ran down the favored Donna Veloce on Nov. 1 at Santa Anita Park, returned to the work tab Sunday, breezing three furlongs in 37.60 seconds.

“She looked good,” Cox said. “First work back from the Breeders’ Cup and we’ll point for the Rachael Alexandra Stakes."

That Grade 2 race on Feb. 15 at Fair Grounds puts British Idiom on course to duplicate the path taken in 2018 by Cox with Monomoy Girl, who went on to win the Kentucky Oaks and Breeders' Cup Distaff.

"Monomoy Girl could be a bit feisty at times, but British Idiom is super laid back. She’s really easy to train," Cox said. "Nothing sticks out about her attitude and the way she does things. She just does what she needs and is an easy filly to handle.

“We’ll get her back on the work tab consistently,” Cox added of British Idiom. "Keep her happy and healthy and working once a week and we’ll see how things work out.”

With British Idiom getting going again, Monomoy Girl, who campaigns for largely the same group of owners, is continuing her slow road back having not raced in 2019. Cox said the newly turned 5-year-old mare is galloping in Ocala, Fla., and should return to his shedrow soon.

Another 3-year-old filly to watch from the barn is Taraz, the romping winner of Fair Grounds' Dec. 21 Letellier Memorial who moved to 2-for-2 for owner/breeder Juddmonte Farms.

“She’ll breeze this weekend,” Cox said. “No real plans right now. The most likely spot would be the Silverbulletday," which runs Jan. 18 at Fair Grounds.

"With her I think the sky is the limit," Cox added. "She trains so professionally and has impressed us ever since we’ve had her. She’s never let us down in the mornings and obviously in her first two starts she has been ultra-impressive. I think she’s special. The bottom line is we have to keep her healthy.

"She’s a huge filly but it’s her athleticism that has impressed me the most. It’s a God-given gift that she has with how big she is and how athletic she is. She does everything so easy and I think the talent is there and I can’t wait to see what the future holds with her.”