Brisset sends Western River, We the People in Peter Pan 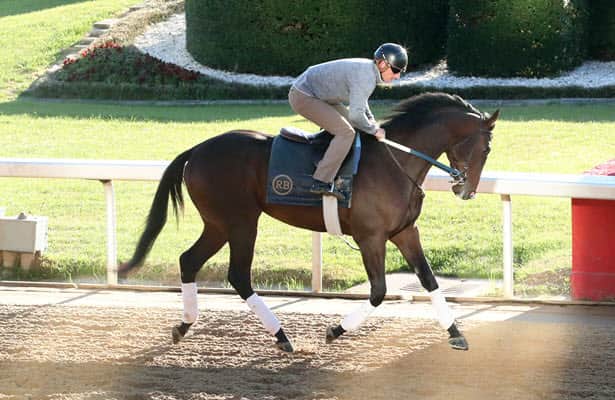 Western River, a full-brother to 2016 Belmont Stakes winner Creator, will attempt to follow in his sibling’s footsteps when seeing stakes company for the first time in Saturday’s Grade 3, $200,000 Peter Pan for 3-year-olds going nine furlongs on the Belmont Park main track.

The Peter Pan, the traditional local prep race for the Grade 1 Belmont Stakes presented by NYRA Bets, has seen multiple horses go on to capture the "Test of the Champions" after a Peter Pan coup including Tonalist (2014), A.P. Indy (1992), Danzig Connection (1985) and Coastal (1979).

One of two entrants for trainer Rodolphe Brisset, Western River was a last out deep-closing winner in a fifth-out maiden event on April 2 at Oaklawn Park, where he came from 18 lengths off the pace to win by 3 3/4 lengths over next-out winner Rider’s Special. The son of Tapit, out of the multiple graded stakes placed Privately Held mare Morena, earned a career-best 87 Beyer Speed Figure for the victory.

Brisset said the Peter Pan will be a perfect stepping stone for the 1 1/2-mile Belmont Stakes, the third jewel of the Triple Crown, which is slated for June 11.

“The timing is just right,” Brisset said. “He broke his maiden five weeks ago. It’s five weeks away from the Belmont, and obviously it’s a class test. What we want to see is if they’re going to go away from him and if he can make his run from the middle of the turn to the wire. If he runs anywhere from one-to-three, we’ll take a strong look at the Belmont. Hopefully, we can get some pace in the race and we’ll be there that day.”

Initially campaigned on turf during his juvenile season, Western River was seventh in his first two career starts, the first of which came off-the-turf. He was given an extended break following a game runner-up on the Ellis Park turf in September, where he was beaten a nose to next-out Laurel Futurity winner Ready to Purrform. Upon his return to action in February, he finished a close third at 17-1 going two turns at Oaklawn prior to his maiden triumph.

“He’s a May foal so the horse literally just turned 3. We knew we were sitting on some talent, he just was not showing it,” Brisset said. “We ran him the first time off the turf and he got very green with the kickback and then the second time he didn’t even try, so I added the blinkers and ran him back in three weeks and he got beat a nose. His nose was in front before the wire, and he was three lengths in front after the wire. The horse who beat him that day, Ready To Purrform, came back and won a stakes, so it wasn’t a bad field. We just thought the horse would be better at three.”

Brisset indicated that he used the form of Creator to guide him in campaigning Western River this year. Like Western River, Creator also tried turf during his 2-year-old campaign before breaking his maiden at Oaklawn the following year.

“I pulled up the PPs on Creator to see what was done with him,” Brisset said. “I figured we would give him time to mature and then come back at Oaklawn and try to see if he wants to be a Derby horse like Creator did.”

Western River, who was a $245,000 RNA at the Keeneland April Horses of Racing Age Sale, will cut back to one turn for the first time in the Peter Pan.

“We know two turns would be better than one turn, but we are hoping he runs as good or an even better race than when he broke his maiden,” Brisset said. “If he gets a piece of it we would be pretty confident to bring him back in five weeks at a two-turn mile-and-a-half in the Belmont Stakes.”

Brisset will also send out We the People, a Constitution colt owned by WinStar Farm, CMNWLTH and Siena Farm. He arrives off a distant seventh-place finish in the Arkansas Derby (G1) on April 2 at Oaklawn Park. The two-time winner broke from the outside in the nine-horse field and was carried wide into the first turn, ultimately failing to menace under Flavien Prat.

“Obviously, we thought we were in a perfect spot on the outside, but we never imagined everyone was going to send and go 22 flat up front and end up being eight wide on the first turn,” Brisset said. “Flavien did the right thing to take him back and the horse just got a little green. He was on the bridle, off the bridle, and he just needs some seasoning and some maturation. We were obviously hoping for a better result and try to get him in the Kentucky Derby, but it didn’t happen.”

Like his stablemate Western River, We the People also has yet to compete at one turn, with all three of his starts taking place going two turns at Oaklawn.

Prat returns to the irons aboard We the People from post 4.

Chad Brown will saddle Klaravich Stables’ Electability following two one-turn mile victories at Aqueduct. The son of Quality Road made his career debut going two turns over the Saratoga turf in August before emerging off a layoff in style, stalking the pace in second and winning his main track debut on March 5 by a half-length. He returned one month later, replicating his triumphant ways against fellow winners by a head.

“It’s a big test for this horse, but he hasn’t done anything wrong yet and he appears to be looking for a little more distance, so we’ll see how he steps up,” said Brown, a two-time Peter Pan winning trainer.

Irad Ortiz Jr. will pick up the mount aboard Electability from post 2.

Kentucky Derby trail veteran Golden Glider will look for his first stakes victory for Hall of Famer trainer Mark Casse. Owned by Gary Barber, Manfred Conrad and Penny Conrad, the Ghostzapper chestnut enters off a pair of fourth-place finishes in the Tampa Bay Derby (G2) in March and the Blue Grass (G1) four weeks later at Keeneland. He also finished fifth in the Sam F. Davis (G3) in February at Tampa Bay Downs.

Golden Glider won his first two outings which came in a maiden special weight in November over synthetic at Woodbine Racetrack and a mile-and-40-yard allowance score in January at Tampa Bay Downs.

Hall of Famer Todd Pletcher will saddle Complete Agenda for owners Repole Stable and St. Elias Stable. A last out maiden winner against elders, the son of Curlin, out of Grade 1 winner Constellation, found the winner’s circle in his first start in New York after wintering in Florida. He earned a career-best 77 Beyer Speed Figure for his maiden victory on April 21 going nine furlongs at Aqueduct.

Jose Ortiz, who piloted 2016 Peter Pan winner Unified, will be aboard Complete Agenda from post 3.