At home on turf, Brill aims next for Santa Anita's Megahertz 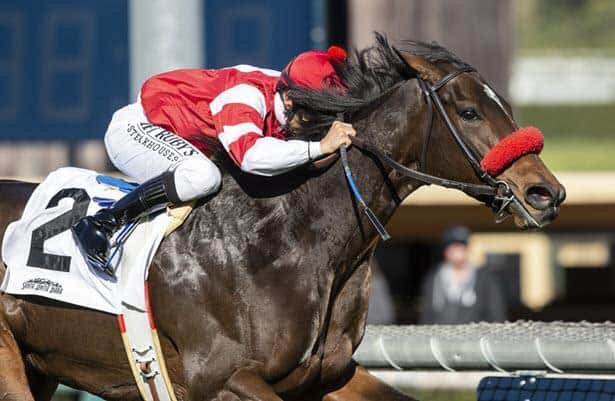 Photo: Benoit Photo
A recent stakes winner over the course, OXO Equine’s Brill heads a solid field of eight fillies and mares going one mile on turf in Monday’s Grade 3, $100,000 Megahertz Stakes at Santa Anita Park.
Trained by Don Chatlos, Brill sped to an impressive gate-to-wire victory in the Lady of Shamrock Stakes going a mile on opening day, Dec. 28, in her first-ever try on grass.
Adding to a competitive Megahertz lineup, trainer John Shirreffs’ Carressa, a lightly raced 4-year-old daughter of Uncle Mo, has been idle since daylighting allowance foes at one mile on dirt Nov. 22 and appears ready for her first stakes assignment, which will also be her first try on turf.
Runner-up as the 6-5 favorite to Brill in the Lady of Shamrock, Keeper Ofthe Stars, a winner of the Autumn Miss Stakes (G3) over the course three starts back, rates a huge chance for trainer Jonathon Wong and California-bred Super Patriot, who comes off a nose defeat in the one mile turf Kathryn Crosby Stakes Nov. 8 at Del Mar, rates a big chance as well.
BRILL
Owner: OXO Equine, LLC
Trainer: Don Chatlos
A $1 million 2-year-old in training sale purchase in 2017, Brill, although twice graded stakes placed, appears poised to garner her first graded victory in what will be her ninth career start. Off at 7-2 in the eight-horse Lady of Shamrock, Brill bounded to early lead when ridden for the first time by Mike Smith and won well within herself. Her biggest concern early could be Carressa, who employed similar tactics in her allowance win on dirt.
CARRESSA
Owner: Mercedes Stables, LLC & West Point Thoroughbreds
Trainer: John Shirreffs
Well beaten in a pair of main track sprints this past spring, she resurfaced on Aug. 22, 2019, at Del Mar and was a galloping 4 ¼-length maiden winner at odds of 5-1 in what was her third career start. Second in her next outing, a one-mile allowance her Oct. 6, Carressa then pressed the pace and took charge heading down the backside en route to a smashing 8 ¼-length tally going a mile again on Nov. 22 at Del Mar. With a Megahertz-best last out Beyer Speed figure of 90 in hand, Carressa, who will be making her sixth career start, could be tough in her first try on turf.
KEEPER OFTHE STARS
Owner: Tommy Town Thoroughbreds, LLC
Trainer: Jonathan Wong
Attentive to the pace throughout, Keeper ofthe Stars was second, beaten 1 ¾ lengths by Brill on opening day with no apparent excuses as the favorite. Favored in three out of her last four races and a winner of two of them, the 4-year-old filly by Midnight Lute has proven most effective when she’s allowed to ramble on the front end, which could prove problematic with several front-running fillies engaged.
SUPER PATRIOT
Owner: Little Red Feather Racing, Peskoff or Salvatore, et al
Trainer: Richard Baltas

A 5-year-old California-bred daughter of Unusual Heat, she comes off a desperate nose defeat in the one mile turf Kathryn Crosby Stakes at Del Mar on Nov. 8, a race in which she rallied from far off the early pace. Claimed five starts back for $35,000 on June 8, Super Patriot, who will be making her first graded stakes start, could be the beneficiary of rapid early pace on Monday.

The Megahertz goes as Race 7, with post time 6:37 p.m. ET. Here's a look at the field with riding assignments in post position order: