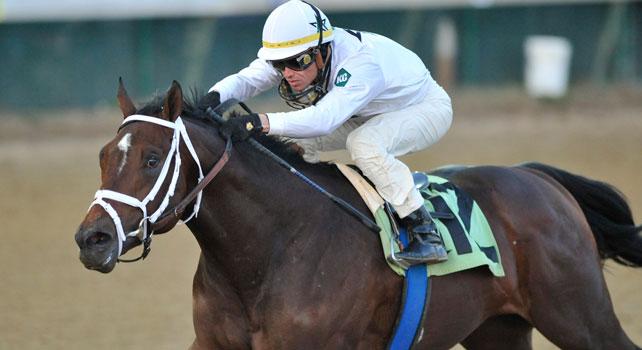 Todd Pletcher entered Brethren and Uncle Mo in Saturday’s Tampa Bay Derby but the latter is expected to start in the one-mile Timely Writer at Gulfstream Park instead.

The Tampa Bay Downs crowd will be disappointed that the 2-year-old champ is running in Hallandale but Brethren is no slouch. The WinStar Farm colt is 3-for-3 lifetime and easily captured the Sam Davis here to kick off his promising 2011 campaign. Ramon Dominguez rides him back and Super Saver’s little brother can punch his Kentucky Derby ticket with a strong effort on Saturday.

Free Entry makes his stakes debut following back-to-back one-turn wins at Gulfstream. The $150,000 Keeneland sales grad owns fine early-pressing speed and Chad Brown has a talented runner on his hands. He looks like the biggest threat to Brethren.

[Do you think Brethren will win the Tampa Bay Derby? Can Free Entry pull off the upset? Log in and rank your 2011 Kentucky Derby contenders!]

Moonhanger might be the best of the local hopes. He graduated by open lengths here Jan 22 and exits a close-up place finish in a turf route. He owns the speed to succeed and might get brave if able to shake loose early.

Economic Summit won a fast maiden race at Belmont last fall before running last behind To Honor And Serve in the Nashua. He makes his first start in more than four months and probably needs the race.

Beamer has been dusted by Brethren and Soldat in his last pair. The late runner will be passing tired horses and can clunk up for a minor award.

Striding Ahead broke his maiden in a wet fast route off the shelf Feb 5. The Juddmonte/Mott runner might make some noise later in the season but is probably not up to facing these in his third lifetime start.

Too Experience ran well to garner the place in the Sam Davis but the minor awards chase was a crap shoot behind Brethren. He can contend for a piece with another forward move.

Sam Davis show finisher Watch Me Go can contend for another minor placing. His three wins were accomplished in sprints and he figures to sit a decent tactical trip.

Crimson Knight is ambitiously placed after winning a local claiming turf route Feb 24. Gerald Bennett claimed him for $16,000 that day and would be thrilled if this one snuck into the superfecta.

The Grade 2, $350,000 Tampa Bay Derby is the 11th race on Saturday and last year’s show finisher Super Saver won the Kentucky Derby later in the spring. The HRN odds below are based on Uncle Mo running in the Timely Writer.