Breeze On By scores in FTBOA Dr. Fager for Nicks' 600th win 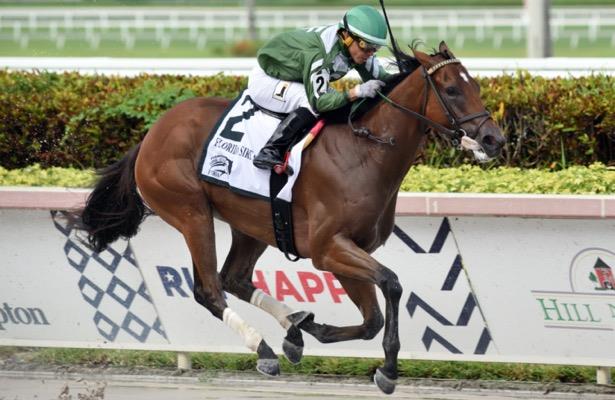 Odds-on favorite Breeze on By fought back gamely after being headed in the stretch to capture the $100,000 Dr. Fager, completing a sweep of Saturday’s FTBOA Florida Sire Stakes races at Gulfstream Park for Stonehedge LLC.

The Michael Yates-trained Go Jo Jo Go and Ralph Nicks-trained Breeze On By were the 13th and 14th winners, respectively, for Gilbert Campbell and his Stonehedge Farm in the tradition rich series for juveniles sire by accredited stallions standing in Florida – second only to Jacks or Better Farm’s record of 19.

“Mr. Campbell has been one of the big breeders in Florida for a long time,” Nicks said. “He’s put a lot of money and effort into it. He deserves it.”

Breeze On By also provided Nicks with his 600th career victory, as well his seventh Florida Sire Stakes success since 2016.

Breeze On By, who was sent to post as the 3-5 favorite, set a solid pace into the stretch past fractions of 22.37 and 45.68 seconds under Emisael Jaramillo for the first half-mile of the six-furlong stakes. Gatsby, who saved ground into the far turn under Hector Berrios, made a menacing outside challenge leaving the turn into the homestretch and managed to put his head in front of the pacesetter in mid-stretch, but Breeze On By fought back gamely to edge away to victory by a length.

“It was a big race,” Nicks said. “He got tested. You never know what kind of grit they’re going to show until they’re put in that position. (Gatsby) got the jump on us and he fought back. That was impressive.”

Breeze On By, who scored a front-running six-length debut victory at Gulfstream on July 12, ran six furlongs over a sloppy, sealed track in 1:10.85. Gatsby finished 8¼ lengths ahead of third-place finisher Boca Boy.

Breeze On By will have the opportunity to give Nicks his fourth consecutive victory in the seven-furlong second leg of the Florida Sire Stakes. Nicks saddled Soutache (2017), Garter and Tie (2018) and Liam’s Lucky Charm (2019) for victories in the Affirmed the past three years.