Breen is at loss to explain Firenze Fire's savaging of Yaupon 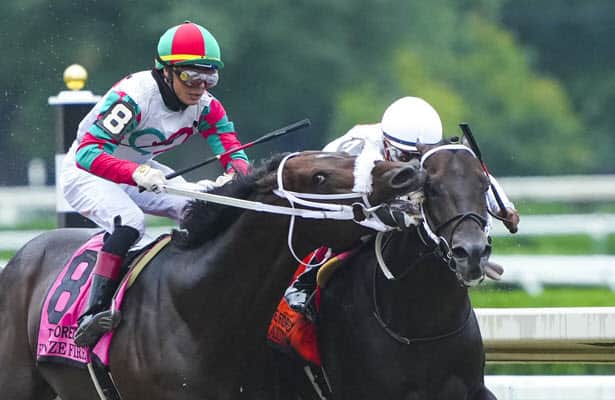 When Firenze Fire was the baddest of boys, repeatedly savaging dueling Yaupon late in the Aug. 28 Forego Stakes (G1) at Saratoga and costing himself a potential victory, trainer Kelly Breen wondered what he should do about it.

“For what he’s done around the barn and how he’s acting,” Breen said, “I think it was a one-time deal.”

As Firenze Fire prepares to use the Vosburgh (G2) on Saturday at Belmont Park as a stepping stone to the Breeders’ Cup Sprint, the trainer sees nothing to suggest the 6-year-old son of Poseidon’s Warrior will misbehave like that again.

“It’s not like all of a sudden he’s turned into this savage horse that can’t be seen with other horses,” Breen said. “From the time he cooled out in that race, he’s the same horse. You can walk up to his stall and feed him a carrot and pat him on the head and he’s a happy camper.”

Although Firenze Fire had been the victim of savaging in the Gallant Bob (G3) at Parx Racing in September, 2018, he had never turned on a foe during the heat of battle as he did against Yaupon. His undeterred foe continued to run straight and true to a head victory while his antagonist lost momentum.

If he dared to see what might happen, Breen could have worked the mercurial Florida-bred in company in preparation for the Vosburgh, a six-furlong contest he won by 2 3/4 lengths last year as a prelude to a third-place finish behind since retired Whitmore in the Sprint. The decision was made not to mess with success.

Bred and owned by Ron Lombardi’s Mr. Amore Stable, Firenze Fire boasts 14 victories and six runner-up efforts in 36 starts for earnings of more than $2.6 million. He has been particularly effective at Belmont Park, winning 7 of 11 starts.

To assign a workmate to the multiple graded-stakes winner after that level of accomplishment, well, few trainers would take such a chance, no matter how egregious the conduct of the race before.

“The formula has been working,” said Breen. “Sometimes they get too aggressive when you put them in company or put someone in front of them and let them run by.”

Firenze Fire has worked four times, all at Belmont, since his Forego antics intrigued racing and non-racing fans alike. He returned to the work tab on Sept. 12, clocking 1:03.05 for the first of three successive five-furlong drills and has not missed a beat. He again might be hard to deny in the Vosburgh, signaling his readiness with a three-furlong blowout in 34.60 seconds, fastest of six at that distance on Oct. 3.

The Vosburgh marks the Florida-bred’s sixth start this season. He has won twice and come in second twice for $423,500 in earnings. That bankroll will endear a horse to a trainer – his recent transgression aside.

“He does have an attitude, but he’s never done anything malicious to anyone around the barn. But he lets them know he’s the alpha dog,” Breen said. “The nice ones do seem to have an aura about them, a presence, and he for sure has it.”

As to what prompted Firenze Fire to turn on poor Yaupon one pleasant afternoon at Saratoga, who knows?

“I wish I could tell you what he was feeling,” Breen said, recognizing that some aspects of Thoroughbreds will always remain mysterious.