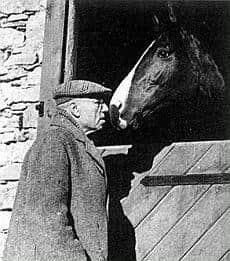 Horse Racing is a sport of superstition, of upward-turned horseshoes and shamrocks. Even the breeding game, perhaps the most scientific of all sectors of Thoroughbred racing, is the most superstitious as well. In the 17th century, horsemen would keep boars behind their stables so as to direct any evil or negative magic upon the boar and spare the racing horses such ailments. Even in modern times, horsemen still use the moon to decide when a foal should be weaned and separated from it’s mother, and there are a broad range of opinions on just how much a forced breeding between a mare and stallion can transfer into a foal’s ability.

It should come as no surprise, then, that when genetics were discovered they weren’t exactly welcomed into racing. One man, however, was not so quick to lean on black cats and sidewalk cracks to run his horse breeding operation. His name is almost as grand as the operation he ran, Federico Tesio - the Wizard of Dormello. Orphaned at but 6 years of age, Tesio would grow up surrounded by the Argentinian gauchos of the Pampas, and in 1898 with his beloved wife upon his arm, he founded Dormello Stud. Tesio had searched all of Italy for a quiet place, a damp place but a dry place too. He wanted a place to test his numerous theories, and in Italy he got it, on the banks of the Lake Maggiore, and if the roomy boxes of Dormello weren’t enough, Tesio sent his weanlings to southern Italy to graze in the warmer weather.

The Wizard was careful, too. He segregated his weanlings, mares, fillies and stallions, dividing Dormello into separate quadrants so as to prevent the spread of disease. Tesio experimented with color, testing to see if chestnut horses had an advantage at sprinting or if bays could stay a long time (grey horses are born chestnut or bay and therefore were bunched with one of the two categories). Tesio tested his theory as he sat down at Newmarket to find that his theory was completely wrong, but he wasn’t deterred from the racing scene - not one bit. Federico set down to breeding horses, and while the wizard could spin his magic into picking horses and training them, neither could compare to his astonishing skills with breeding horses.

Tesio set down to breeding some of the best Thoroughbreds ever to grace Europe. Just 13 years after buying Dormello the wizard bred his first Derby Italiano winner, beginning a legacy that would see him breed 22 Derby Italiano winners, more than anyone has or likely ever will. Among these horses that the wizard produced were three special horses: Donatello II, Nearco and the greatest horse to ever touch turf, Ribot.

Donatello II would be Tesio’s favorite, a son of the soon to be exported Blenheim II, Donatello II was a great success, winning the Derby Italiano just a year before Nearco, one of the most influential sires of all time, would win it in 1938. Nearco retired undefeated, a clear winner in 14 of his 14 starts and could sprint five furlongs or stretch out to the almost two mile distance of one mile and seven furlongs. Nearco’s grandson, the great Northern Dancer, would become one of the - if not the most influential sire in the world.

The Wizard’s success can be attributed to his theories, which were as plentiful as stars in the sky. As John Hilsop once said, “When those of my generation come to be asked by their grandchildren “Who was the greatest breeder, the outstanding sire, the best racehorse of your time?” – the answer will probably be Tesio, Nearco and Ribot. ..for it is unlikely that any modern breeder will achieve comparable success of Senator Tesio.”

Tesio worked hard at what he did, writing in his book that “For 50 years I have carefully studied the pedigrees of over a thousand horses that have won the great races, examining these pedigrees to the 7th and occasionally to the 12th generation. I learned that to maintain the characteristic of winning endurance it is necessary to occasionally introduce the blood of sprinters over 1400 and 1600 meters.”  Tesio’s constant praise of the stallion and almost complete ignorance for the mare might be deemed by some as crazy, but it worked fine. Once comparing the mare to a sac, Tesio explained that the mare’s purpose was only to carry the stallion’s semen and develop it. But then again, who can say that Federico was wrong?

The year Tesio died, his greatest champion hit the racetrack. Ribot, two-time winner of Prix de l’Arc de Triomphe would retire undefeated in sixteen starts, running in England, France and Italy as an easy winner. Ribot would become the leading sire of England three times, almost as a final note to Tesio’s brilliance. Tom Rolfe, Arts and Letters and Graustark are sons of the great Ribot and show us that the Wizard’s brilliance still affects us today. Though it may be a game of luck, Federico Tesio conquered Horse Racing with an open mind and the power to wonder.

Preakness weather: Already 91 and climbing at Pimlico
Baltimore Not that partying students who are finis...