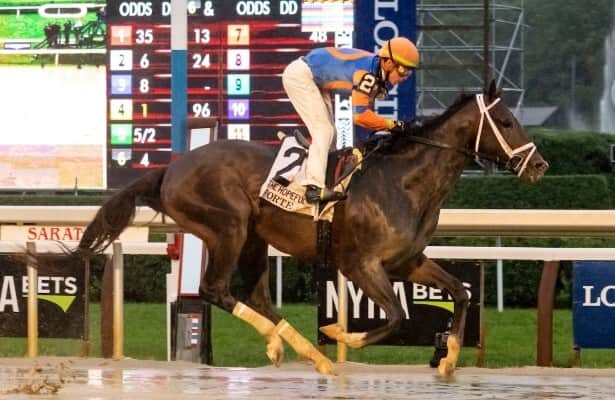 The Grade 1 Breeders’ Futurity on Saturday at Keeneland has plenty to offer the overflow field of 16 2-year-olds. There is a $600,000 purse, along with a “win and you’re in” spot in the Breeders’ Cup Juvenile, and qualifying points for the 2023 Kentucky Derby to the top five finishers (10-4-3-2-1).

The last four winners of the Breeders’ Futurity went on to have accomplished careers.

Rattle N Roll s the winner of three derbys this year, including the recent Oklahoma Derby (G3), and just shy of $1 million.

Essential Quality was a champion 2-year-old and 3-year-old. He finished fourth in the Kentucky Derby and won the Belmont Stakes and the Travers (G1) with eight career wins and $4.7 million in earnings.

Maxfield was the winner of six graded stakes, never finished worse than third in 11 career starts and earned $2 million.

Knicks Go was 2021 Horse of the Year and winner of the Breeders’ Cup Classic and Dirt Mile. His 10 victories helped him earn $9.2 million.

Here is a full-field analysis for the Breeders’ Futurity with the morning-line odds provided by the Horse Racing Nation staff. The Futurity is scheduled as race 9 of 11 on a card that has five graded stakes.

1. Frosted Departure (15-1 – Frosted – Kenny Mc Peek / Brian Hernandez Jr. – 4: 2-0-0 - $116,299) With four starts, Frosted Departure is the most experienced horse in the field. As is often the case, trainer Kenny McPeek bought him for a relatively low price of $100,000 after he sold for $50,000 as a weanling. After doing very little running in his debut, the grey son of Frosted broke his maiden at Ellis Park by almost four lengths. In the Ellis Juvenile, he pressed the pace and faded to fourth, but three weeks ago he beat an allowance field at Churchill Downs by over nine lengths on the front end. McPeek won the Futurity last year with Rattle N Roll and in 2009 with Noble’s Promise. Toss.

2. Loggins (4-1 – Ghostzapper – Brad Cox / Florent Geroux – 1: 1-0-0 - $69,000) Loggins broke his maiden in his first start at Churchill Downs three weeks ago by more than eight lengths with a stalking trip against a field of 11 as an odds-on favorite. The son of Ghostzapper sold for $460,000 as a Saratoga yearling. Another promising Cox runner.

4. Confidence Game (20-1 – Candy Ride – J. Keith Desormeaux / James Graham – 3: 1-0-1 - $90,190) Confidence Game made all three of his starts at Churchill, beginning with a third in July behind the runaway winner Damon’s Mound. He then broke his maiden by five lengths against a full field. In the Iroquois, he faded down the stretch to finish fifth. Toss.

5. Instant Coffee (10-1 – Bolt d’Oro – Brad Cox / Luis Saez – 1: 1-0-0 - $57,750) Instant Coffee was another debut winner for Brad Cox, but this colt notched his victory at Saratoga at odds of 14-1 in a field of nine going seven furlongs and raced from off the pace. Instant Coffee is owned by Al Gold who races Cyberknife with Cox. Toss.

6. Bourbon Bash (15-1 – City of Light – D. Wayne Lukas / Rafael Bejarano – 3: 1-1-0 - $90,750) Bourbon Bash made three starts at Saratoga for D. Wayne Lukas. In his debut he set the pace and finished second at 6-1. (Note that Lukas first-time starters rarely win.) He came back in three weeks and got his maiden victory by eight lengths in a field of nine while racing on the lead. In the Hopeful (G1) he had a poor start and did little running on the sloppy and sealed track. He will need a fast track at Keeneland to see if he can contend. Live long shot.

7. Forte (9-2 – Violence – Todd Pletcher / Irad Ortiz Jr. – 3: 2-0-0 - $225,000) The word was out that Forte could run when he won at first asking at Belmont in May by almost eight lengths as the 1-5 favorite. Against a full field in the Sanford (G3) as the top betting choice, he lacked a closing move and finished fourth. On a sloppy track in the Hopeful (G1), Forte was back on his game and rallied to win by three lengths at almost 7-1. At the last minute, trainer Todd Pletcher decided to skip the Champagne (G1), which was run on a sloppy and sealed track, to run in the Breeders’ Futurity. Win contender.

8. Newgate (12-1 – Into Mischief – Bob Baffert / John Velazquez – 2: 1-0-0 - $66,000) Newgate was a debut winner for Bob Baffert at Del Mar in July by 3 1/2 lengths as the 1-2 favorite in a field of nine. He came back in the Del Mar Futurity (G1) where he tried to press the pace but faded down the stretch to finish fourth. Trainer Bob Baffert, who won the Breeders’ Futurity in 1999 and 2000, is loaded with promising 2-year-olds, which prompts him to find opportunities outside of California and away from the barn star Cave Rock, who will be a heavy favorite in the American Pharoah (G1) at Santa Anita on Saturday. This colt was purchased for $850,000 by a partnership led by SF Racing, Starlight Racing and Madaket Stables. Win contender.

10. Lost Ark (9-2 – Violence – Todd Pletcher / Flavien Prat – 2: 2-0-0 - $169,500) Lost Ark is unbeaten after his first two starts, which he won after stalking trips as a heavy favorite. In July at Belmont Park, he won by more than five lengths sprinting and then stretched to a mile in the Sapling at Monmouth Park, where he beat a field of eight by 7 1/2 lengths. Lost Ark is out of the A.P. Indy mare Marion Ravenwood, so the extra distance should be a positive factor. Todd Pletcher won the Futurity in consecutive years with We Miss Artie and Carpe Diem. Win contender.

13. Two Phil’s (20-1 – Hard Spun – Larry Rivelli / Jareth Loveberry – 3: 2-0-0 - $69,600) Two Phil’s began his career in June at Churchill Downs, when he had some trouble and finished fifth at 7-2. At Colonial Downs, he was well bet again and got the maiden victory while racing on the lead. Trainer Larry Rivelli shipped to Canterbury Downs, where he romped in the Shakopee Juvenile by almost 10 lengths as the even-money favorite. Toss.

14. Powerful (15-1 – Nyquist – Steve Asmussen / Jose Ortiz – 2: 1-1-0 - $78,750) Powerful was purchased for $525,000 as a yearling by Courtlandt Farms and went to Saratoga this summer with Steve Asmussen. He broke his maiden in his second start as an odds-on favorite going seven furlongs after pressing the pace. Far outside post position will provide an extra challenge. Toss.

AE 15. Carmel Road (6-1 – Quality Road – Bob Baffert / Luis Saez – 2: 1-0-1 - $57,600) Carmel Road was a $650,000 yearling purchase by a high-profile partnership that includes SF Racing, Madaket Stables, Starlight Racing and Stonestreet. He broke his maiden in his second try at Del Mar by almost nine lengths going a mile after a troubled trip in his debut. Carmel Road was a heavy favorite in both starts. Contender if he draws in.

With so much on the line in the Breeders’ Futurity, it is not surprising that the race drew a big field loaded with win contenders. Because Derby points and the major shares of the purse go to the first five finishers, here are the top five 2-year-olds in the Futurity field.

No. 7 Forte brings a maiden victory and a three-length win in the Hopeful (G1) to Kentucky, and those two efforts make him a win contender. Trainer Todd Pletcher’s decision to skip the Champagne (G1) raises concerns.

No. 3 Honed stamped himself as a good one when he rallied from last in a strong field of nine to get second in the Iroquois (G3). In this large field he might be overlooked in the betting.

No. 10 Lost Ark is unbeaten in his first two starts by a total of 13 lengths for Todd Pletcher, including the Sapling which he won by 7 1/2 lengths with a stalking trip going a two-turn mile.

No. 6 Bourbon Bash began his career with two promising efforts at Saratoga. A poor start and a sloppy track in the Hopeful might have compromised his chances. He is another one who may end up with generous odds.

No. 8 Newgate ships east for Bob Baffert looking for a spot away from Cave Rock. He won his debut at short odds the way the good Baffert 2-year-olds usually do.