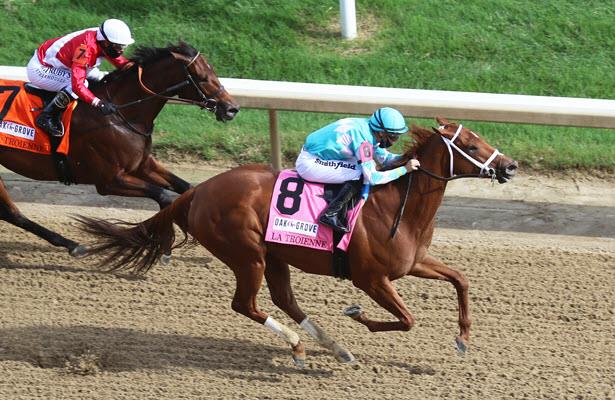 One month ago, the Breeders' Cup Distaff appeared to be one of the best betting races over the weekend. As Monomoy Girl continued rounding back into top form, Midnight Bisou looked like a very formidable opponent despite her loss to Vexatious in the Personal Ensign.

Vexatious suddenly seemed like a real contender, as did Fighting Mad, who remained undefeated around two turns in the Clement Hirsch at Del Mar. Additionally, the sky appeared to be the limit for 3-year-olds Swiss Skydiver and Gamine.

Just after Monomoy Girl cemented her status as the horse to beat in the Distaff with a win in the La Troienne (G1), the rest of the division began to crumble. Vexatious ran poorly in the La Troienne, making her Personal Ensign look like a one-time performance. Gamine, who has that superstar quality to her, faded to third in the Kentucky Oaks at the Distaff distance. That performance convinced trainer Bob Baffert to keep her sprinting in the near future.

Though Swiss Skydiver did not run poorly in the Oaks, she failed to build on her impressive Alabama victory as many hoped with her second place effort.

Fighting Mad had little to offer in the stretch of the Zenyatta Stakes last weekend, finishing third as the 2-5 favorite in a four-horse field.

The most crushing news in the division might have come on Monday, when Midnight Bisou's connections announced she would be evaluated for a potential injury. Even if she checks out fine, it seems unlikely they would run her in the Distaff with her tremendous breeding value.

Swiss Skydiver has a chance to make a statement in the Preakness, and rapidly improving 3-year-olds Shedaresthedevil and Harvest Moon could be this good, but those possibilities are not as scary to Monomoy Girl as Gamine's star power and Midnight Bisou's talent when 100 percent.

Below are the best available odds for the Breeders' Cup Distaff, assuming Midnight Bisou does not run.