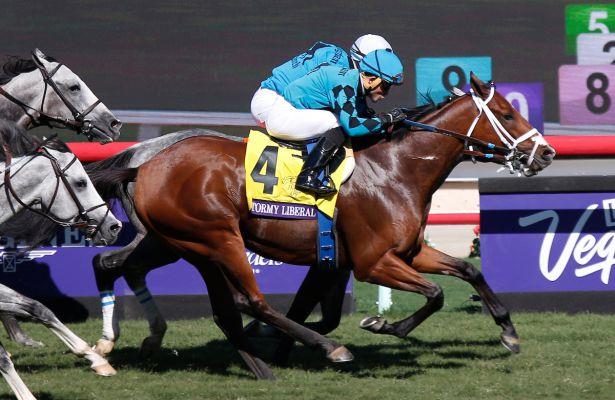 Trainer Peter Miller appears well represented in Saturday’s Grade III, $150,00 Daytona Stakes, as he’ll send out recent stakes winner Calculator and Breeders’ Cup Turf Sprint Champion Stormy Liberal over Santa Anita’s six and a half furlong turf course, a layout both horses adore.  Adding considerable strength to the seven-horse Daytona is trainer Kenny Black’s classy California-bred gelding What a View, who has been idle since June 3 and will be trying the hill for the first time.

If the old adage “Condition can beat class” holds, Calculator may prevail over his highly accomplished stablemate, who’s been idle since well beaten in a Group I turf sprint in Hong Kong on Dec. 10.  A convincing one length winner of the restricted Clockers’ Corner Stakes here Jan. 28, this Florida-bred 6-year-old full horse by In Summation is now unbeaten in three hillside turf tries.  Well beaten on dirt in the Grade I Breeders’ Cup Sprint Nov. 4, Calculator bounced back to run a close fourth in the Grade III, 6 ½ furlong Midnight Lute Stakes Dec. 30, prior to shifting to turf for his Clockers’ Corner win.  Ensconced with Miller at Del Mar, Calculator has three works on his tab since winning here on Jan. 28 and appears primed for another top effort in his 21st career start.

The defending Daytona Stakes champ, Stormy Liberal has seven wins and three seconds from 12 tries over Santa Anita’s unique hillside layout and were it not for his 11th place finish going six furlongs on turf in the Group I Hong Kong Turf Sprint Dec. 10, he would be heavily favored to defend his title on Saturday. A gutty head winner of the Grade I Breeders’ Cup Turf Sprint going five furlongs Nov. 4, this 6-year-old Stormy Atlantic gelding amassed $783,700 in earnings last year at age five and if his nosedive in Hong Kong can be forgiven, he appears better than ever as he approaches the 24th start of his career.  With five works on his Del Mar work tab since returning to Southern California, Stormy Liberal’s connections are hopeful he can rebound to winning form and if he does, he’ll become racing’s newest millionaire, as he enters the Daytona with earnings of $983,570.

Best suited throughout his career at one mile on turf, this 7-year-old California-bred gelding by Vronsky brings a world of class to the Daytona party, as he’s a Grade I winner (Frank E. Kilroe Mile, March of 2016) and a four-time stakes winner overall.  Idle since a well beaten seventh here in the Grade I Shoemaker Mile June 3, What a View has seven works on his tab for his return and could be in need of a race in what will be his first-ever try down the hill.  With an overall mark of 21-7-5-0, he has earnings of $824,671.