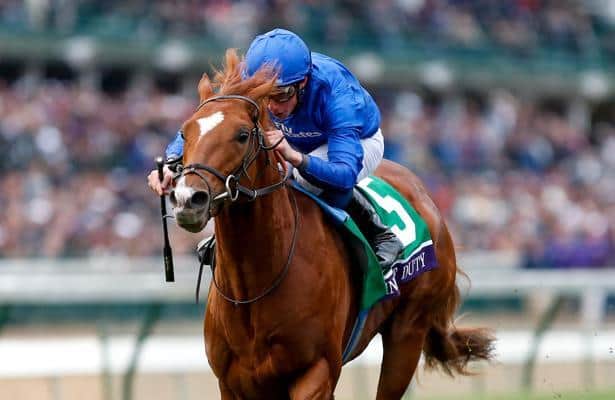 Line of Duty, the 2018 Breeders' Cup Juvenile Turf winner who was pre-entered for next weekend's Mile at Santa Anita Park, suffered a catastrophic injury in training on Saturday, owner Godolphin announced.

After his victory at Churchill Downs, the son of Galileo had a disappointing start to his 3-year-old season, missing the board in the Epsom Derby (G1), but then turned around his form to finish third in a trio of Group 1 and 2 races, most recently in the Qatar Prix Dollar (G2).

“Line Of Duty was a brave horse who has traveled the world over," trainer Charlie Appleby said in a statement. "As well as his brilliant win at the Breeders’ Cup, he has performed at the highest level throughout his career and will be sorely missed at Moulton Paddocks.”

Details of the injury and its circumstances were not provided by Godolphin. The 3-year-old colt had not yet shipped to begin training at Santa Anita Park.

Assuming Bricks and Mortar is indeed bound for the Breeders' Cup Turf rather than the Mile, this defection will allow into the field both Suedois and the second horse on the preference list, Trais Fluors. Both are based overseas.

Favoritism in the Breeders' Cup Mile could belong to either Aidan O'Brien-trained Circus Maximus or Uni, a Chad Brown-trained mare supplemented off a record-setting win in Keeneland's First Lady (G1).