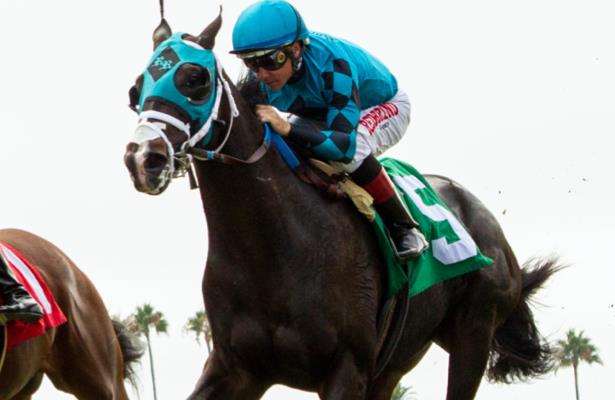 Billy Batts, second to Structor in the Breeders’ Cup Juvenile Turf back on Nov. 1, will make his 3-year-old debut sprinting 5 1/2 furlongs over the lawn.

A Peter Miller-trained son of City Zip for Rockingham Ranch, Billy Batts  broke his maiden at fourth asking last season before placing in the Del Mar Juvenile Turf and Santa Anita’s Zuma Beach. In the Breeders’ Cup, he ran near the lead and briefly inherited the top spot in the stretch before Structor ran by for a 3/4-length victory.

Miller’s represented by a second entry, the California-bred filly Bulletproof One. While going 3-for-3 to open her career, she was purchased by Gary Barber and partners and has gone on to consistently hit the board. But the daughter of Idiot Proof, third in the Jan. 18 California Cup Oaks, will be seeking her first victory in five starts Friday.

Bulletproof One has the three post under jockey Abel Cedillo.

The Doug O’Neill barn has a trio entered in the Baffle, with Cal-bred Big Returns the only stakes winner of them. Qatar Racing Limited’s Air Force Jet may merit a look in his second domestic start having run ninth, and eligible to improve, out of the Dec. 29 Eddie Logan at a mile.

Others in the field are Andrew Lerner-trained Rager, who broke his maiden at this course and distance before missing the board in stakes tries on dirt and synthetic; and Phast Pharoah, who from the Jeff Bonde barn steadily improved over his first six starts before breaking his maiden Jan. 4 at this distance.