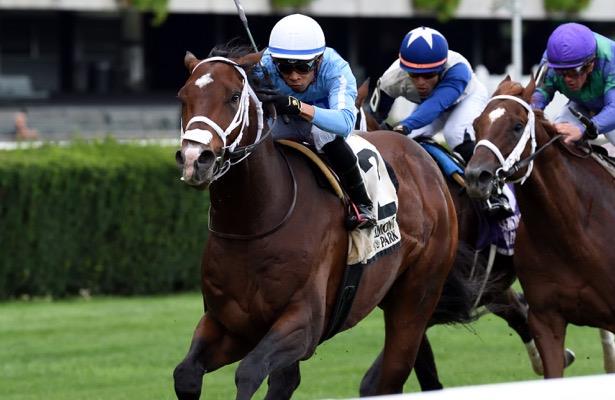 Trained by Jason Servis, the Declaration of War bay graduated at first asking at Monmouth Park ahead of half-length win in the Futurity at Belmont in October. He completed his juvenile campaign with a strong second in the Grade 1 Breeders' Cup Juvenile Turf at Churchill Downs, where he bobbled at the break.

After stumbling out of the gate in his seasonal debut when seventh in the Mahony at Saratoga Race Course, jockey Manny Franco, aboard Uncle Benny for the first time, was tasked with engineering a clean trip for the talented colt.

Out of the gate fifth in a field of eight, Uncle Benny settled comfortably for Franco as Mucho led the field through splits of 22.50 and 45.29 on the firm Widener turf course under pressure from Elektronic.

Mucho led the field into the turn but Uncle Benny, who saved ground throughout, was angled wide for the stretch drive and reeled in the frontrunner for a 1 ¾-length score in 1:08.57. Chilly in Charge, the longest shot on the board at 34-1, rallied from last to complete the exacta by a nose over Pulsate.

Rounding out the order of finish were Elektronic, Neverland Rock, Mucho, Readyforprimetime and Achilles Warrior. No Bang No Boom was scratched after breaking through the gate and unseating jockey Dylan Davis. Main track only entrant Releasethethunder was also scratched.

Franco said he felt comfortable throughout aboard Uncle Benny.

"I wanted to make sure that he broke well," said Franco. "The last three times he broke slow. After the break, I just settled back and didn't change anything. He was there for me the whole way.

"I had a lot of horse at the end and I don't think the other horse (No. 10. Chilly in Charge) was going to pass me because he kept fighting," added Franco. "When he felt him coming, he gave me a little bit more."