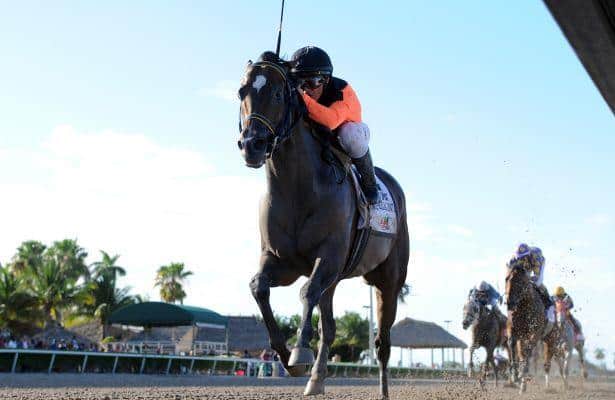 Owned by Raymond Mamone, Imperial Hint enters the weekend looking to build on his 3 ¾-length score in in the Grade 1 Alfred G. Vanderbilt Handicap on July 28 at Saratoga Race Course.

The Vanderbilt marked the first Grade 1 victory for both the 5-year-old son of Imperialism and trainer Luis Carvajal, Jr. Closing under Hall of Fame rider Javier Castellano, Imperial Hint won effortlessly while finishing just .94 seconds off the track record set by Speightstown in the 2004 Vanderbilt.

A win on Saturday would pave the way for a berth to the Breeders' Cup Sprint on November 3 at Churchill Downs, a track where the winner of 11-from-17 career starts has not fared well. In just his third career race, Imperial Hint finished 12th in the Grade 3 Pat Day Mile after setting the pace and tiring, then returned two years later in the Grade 2 Churchill Downs on the Kentucky Derby undercard, finishing a tired to sixth over the sloppy and sealed track.

With a possible return to the Breeders' Cup Sprint - a year after his second-place finish by one length behind winner Roy H. - Carvajal is faced with returning to the historic track under the Twin Spires but said he hopes the third time is the charm for his horse.

"Churchill Downs is a very tricky racetrack, but I think that it was just bad luck," Carvajal said. "The first time I ran the horse in Kentucky it was a mile race, and I thought he would have no problem going a mile because he won going seven-eighths and he galloped out really nice. I kept him in the Pat Day Mile because it was one turn. They went blazing, and I think they went three quarters in 1:08 and change that day and 1:21 for the seven-eighths, and he just put the brakes on.

"We went to the lead and went very fast too, and he got caught on the inside, and didn't run good. The last sixteenth was tough on him. He was stuck on the inside. It was a tough race, but we still lost by only four lengths, but I think it would be a very different scenario if he goes back there and runs three-quarters. If we do go back to Kentucky, it's a different game, and the third one is the lucky charm. I hope it definitely works that way."

Since the Vanderbilt, Imperial Hint has blazed through four bullet breezes over the main track at Parx.

"Last year, he used to work fast," Carvajal said. "Even if you just sit on him, and don't ask him, just work him against the bit, he'll work fast, you'll get him to go quite fast. Now, we do the same thing. I worked him a half-mile, and I don't use a jock, I use my exercise rider Pedro, he knows the horse. He breaks off and just sits back and lets him go a little bit, and he just goes like that all the way to the wire. He just works fast and he gets a lot out of his work. It's good.

"Like I say, horses are like football players," he added. "You get the best players sometimes, but then things happen. I just keep my fingers crossed. We'll go towards this race Saturday, and then after Saturday on to the next. I would love to go to the Breeders' Cup again. I wondered after if I would ever get back to the Breeders' Cup, and now it looks like we're going that way again. It's like a miracle. It's wonderful to go back to the Breeders' Cup with a horse that has a chance. Hopefully he stays healthy and the horse is happy. Then we have a chance."