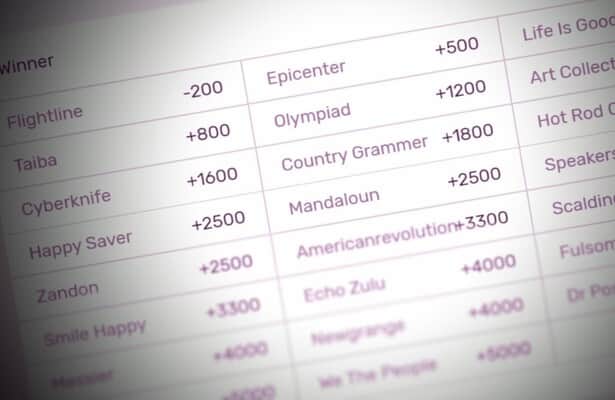 A second Grade 1 victory has put Taiba among the shortest-priced futures favorites to win the $6 million Breeders’ Cup Classic.

His win Saturday in the Pennsylvania Derby (G1) led an international bookmaker to cut Taiba from 16-1 to 8-1 to win the climactic Nov. 5 race at Keeneland. Trained by Bob Baffert, the 3-year-old colt also won the April renewal of the Santa Anita Derby (G1).

Since last week there were only seven changes among the 140 betting choices listed by Costa Rica-based Bovada for nine Breeders’ Cup races, all for horses who are at least 3 years old.

Classic. One of five Saturday stakes winners sired by Gun Runner, Taiba shared the third-shortest odds for the Classic. Only undefeated Pacific Classic (G1) winner Flightline at 1-2 and Travers (G1) victor Epicenter at 5-1 carry shorter prices. Life Is Good, the likely favorite for Saturday’s Woodward (G1) at Aqueduct, also is 8-1.

Sprint. Gunite, another Gun Runner 3-year-old, was shortened from 10-1 to 6-1 to win the six-furlong Sprint. That was after his triumph Saturday in the Harrods Creek at Churchill Downs. His Steve Asmussen-trained stablemate and reigning division champion Jackie’s Warrior remained the plus-135 (6-5) favorite.

Filly & Mare Sprint. For the second week in a row the odds moved in this division for two horses who have not raced in weeks. Matareya, third last out in the Test (G1), went from 10-1 to 9-1. Ce Ce, who was fifth in the Ballerina Handicap (G1), was cut from 12-1 to 11-1. Ballerina winner Goodnight Olive still was the 3-1 favorite.

Mile. It appears there is a bull market for Modern Games to win again in the Breeders’ Cup. His win in this month’s Woodbine Mile (G1) continued to resonate, with his odds moving from plus 175 (7-4) to plus 150 (3-2) to win the Mile on the Keeneland grass.

Filly & Mare Turf. Eight days after her win in the Jockey Club Oaks Invitational (G1) at Aqueduct, McKulick made a big move from 14-1 to 8-1 to finish first in this 1 3/16-mile race. Dual Group 1 winners Inspiral and Nashwa, both trained by John and Thady Gosden, remained the co-favorites at 7-2.

Distaff, Dirt Mile and Turf Sprint. These three divisions were unchanged from last week. Three-time Grade 1 winner Nest was firm at plus 135 (6-5) to win the 1 1/8-mile Distaff. Jack Christopher held steady at 3-2 to win the two-turn Dirt Mile. Triple Group 1 winner Highfield Princess from England continued to be the 2-1 top choice to earn the trophy in the 5 1/2-furlong Turf Sprint.