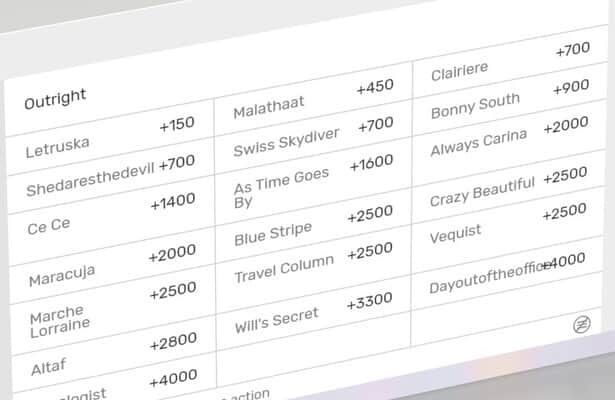 Letruska, Golden Pal and Echo Zulu all were weekend winners, and they. became even bigger favorites in the futures market for next month’s Breeders’ Cup at Del Mar.

The Costa Rica gambling website Bovada updated its odds for 12 divisions and opened betting for the two races it had not yet posted. These are the updated markets for the 14 Breeders’ Cup races scheduled to be run Nov. 5 and 6 (with odds from last Monday in parentheses):

Hot Rod Charlie’s move from 8-1 to 7-1 and Medina Spirit’s from 8-1 to 15-2 led a list of modest changes for the $6 million Classic. Forza Di Oro, who went from 16-1 to 25-1 since his fifth-place finish in the Woodward (G1), showed the biggest drift. Stablemates Knicks Go and Essential Quality from the Brad Cox stable continued to solidify as the top two choices.

While 2020 winner Tarnawa held her ground as the favorite, Domestic Spending shortened from 9-2 to 5-1. She has maintained a schedule of weekly workouts for trainer Chad Brown since she finished second Aug. 14 in the Mister D. (G1) at Arlington Park. Hurricane Lane, Snowfall and Yibir, all based in Europe, showed longer odds since last week.

Letruska’s victory Sunday in the Spinster (G1) at Keeneland led to her being cut from 7-4 to 3-2, making her an even firmer favorite for the $2 million Distaff. Kentucky Oaks (G1) winner Malathaat drifted from 9-2 to 4-1 and remains the second choice. Cotillion (G1) winner Clairière shortened to 7-1, making her a joint third choice.

Before there is any thought about sending him to Del Mar next month, Palace Pier has to get through Saturday, when he is favored to win the Queen Elizabeth II (G1) on British Champions Day at Ascot. That uncertainty might be why he drifted from 9-5 to 9-4 to win the $2 million Breeders’ Cup Mile.

After failing last year as the 9-10 favorite in the Juvenile, Jackie’s Warrior is attracting bull-market attention again, this time as the plus-110 choice for the $2 million Sprint. The filly Bella Sofia, like Jackie’s Warrior on a three-race winning streak, saw her odds shorten from 8-1 to 13-2.

Flower Bowl (G1) winner War Like Goddess, who finished first in her last four starts, held steady as the 3-1 favorite for this $2 million race. Phil D’Amato’s 3-year-old Going Global finally opened at 16-1 more than 1 1/2 months since her last start, a victory in the Del Mar Oaks (G1).

With his 4-for-5 record punctuated by last month’s triumph in the Kelso Handicap (G2), Life Is Good was cut from 7-4 to 3-2 for the two-turn, $1 million Dirt Mile. Silver State went from 5-1 to 8-1 two weeks after his runner-up placing in the Parx Dirt Mile.

Golden Pal already was a firm favorite in spite of his seventh-place finish overseas in the Nunthorpe Stakes (G1). His triumphant comeback for trainer Wesley Ward on Saturday in the Woodford (G2) at Keeneland affirmed the faith that had been shown in him. He went from 5-2 to 7-4 to win the $1 million Turf Sprint. Two-time group winner Starman, who finished a close second in the Sprint Cup (G1) at Haydock, England, last month, shortened from 15-2 to 5-1.

Reigning champion and 2020 Filly & Mare Sprint winner Gamine, at minus-135, is the only odds-on favorite in the Breeders’ Cup futures. Bella Sofia, winner of the Test (G1) and Gallant Bloom (G2), shortened from 4-1 to 3-1. Since she finished first in the Chillingworth (G3) this month at Santa Anita, Ce Ce made a big move from 8-1 to 5-1.

It might not have been a big field for this month’s Champagne (G1) at Belmont Park, but it was well regarded. Jack Christopher won by 2 3/4 lengths, thrusting him from a joint third choice to the favorite’s role in the $2 million Juvenile. Rattle N Roll opened at 5-1 after his victory Saturday in the Breeders’ Futurity (G1) at Keeneland, even though trainer Kenny McPeek said he might not take the colt to Del Mar.

A 3-for-3 record, two Grade 1 victories and a 7 1/4-length triumph Saturday in the Frizette (G1) at Belmont Park sent Echo Zulu from a lukewarm 7-2 to a firm 7-4 favorite to win the $2 million Juvenile Fillies. Juju’s Map opened as the 5-2 second choice after her victory Friday in the Alcibiades (G1) at Keeneland. Ain’t Easy made her first appearance in the futures at 9-2 on the strength of her Oct. 1 win in the Chandelier (G2) at Santa Anita.

By winning a seven-furlong, Group 3 race last month at Newmarket, England, Godolphin homebred colt Modern Games opened as the 3-1 favorite to win the one-mile, $1 million Juvenile Turf. His stablemate Albahr, also trained by Charlie Appleby, was 4-1 after finishing first last month in the Summer Stakes (G1) at Woodbine for his fourth consecutive victory.

Wild Beauty was no better than fifth Friday in the Fillies’ Mile (G1) back home at Newmarket. But her score last month in the Natalma (G1) at Woodbine was enough to open her as the 3-1 favorite to win the one-mile, $1 million Juvenile Fillies Turf. Also from England, Group 1 winners Discoveries and Tenebrism were made joint second choices at 11-2.

Riding the momentum of two consecutive Group 1 victories in Europe, Perfect Power remained the favorite to win the only Grade 2 among the Breeders’ Cup races. Averly Jane opened at 5-1 after she won the Indian Summer at Keeneland, running her record to 4-for-4 for Ward.