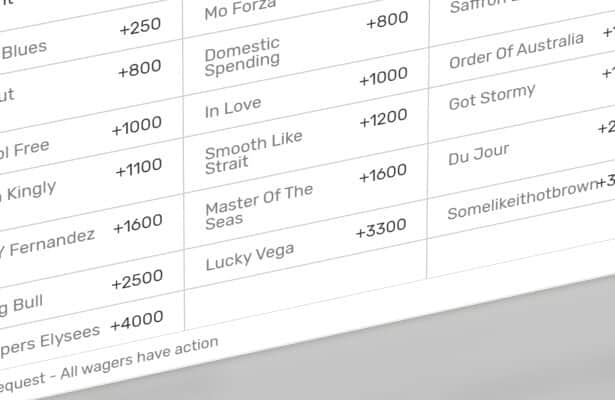 While Knicks Go and Essential Quality remained the top two choices to win the Classic, the British Champions card Saturday led to plenty of movement in the futures markets for the Breeders’ Cup Turf and Mile.

Conspicuous by her absence from Ascot during the weekend, 2020 winner Tarnawa became an even shorter-priced favorite to win the Turf, according to the Costa Rica-based bookmaker Bovada. The dropout of prominent European horses led to Space Blues, a Group 1 victor this month in France, opening as the top choice in the Mile.

Here are the updated Breeders’ Cup futures odds for the championships scheduled to be run Nov. 5 and 6 at Del Mar. (Odds from last Monday are in parentheses.)

Knicks Go has yet to race 1 1/4 miles, but he still shortened to 5-2 to make him more of a firm favorite to win the $6 million Classic. His stablemate in the Brad Cox barn, Essential Quality, drifted to 4-1 but remains the second choice. Dubai World Cup (G1) runner-up Chuwa Wizard, who is based in Japan, opened at 33-1.

Before and since Sealiway’s upset victory Saturday in the British Champion Stakes (G1), overseas connections ruled out the likes of Hurricane Lane, Snowfall and Tribhuvan from consideration for the $4 million Turf. Last year’s Breeders’ Cup winner Tarnawa did not run at Ascot. She is still training forward from her second-place finish in the Prix de l’Arc de Triomphe (G1), and her odds shortened to 2-1.

The odds did not move for the $2 million Distaff, where Letruska, her 6-for-7 year and her Grade 1 victories continue to rule the market.

After his upset loss in the Queen Elizabeth II Stakes (G1) on Saturday, Palace Pier is not coming to America. Neither are Poetic Flare and Baaeed. Space Blues, who won the Prix de la Forêt (G1) on the Arc undercard, opened as the new favorite to win the $2 million Mile. He is bred and owned by Godolphin and trained by Charlie Appleby, who said the 5-year-old Dubawi could race one last time by going to Del Mar. Space Blues has not raced farther than seven furlongs in 2 1/2 years.

The favorite Jackie’s Warrior accounted for the only change in the market for the $2 million Sprint, going from even money (actually plus-110) to 6-5 (plus-120).

A winner at Keeneland on Saturday was the most prominent of the new names lining up behind 3-1 favorite War Like Goddess in the futures for the $2 million Filly & Mare Turf. Shantisara opened at 5-1 after her third consecutive victory for Chad Brown came in the Queen Elizabeth II Challenge Cup (G1). Teona, who won the Prix Vermeille (G1) on Sept. 12 in France, also appeared for the first time at 5-1.

Life Is Good, who was transferred this spring from trainer Bob Baffert to Todd Pletcher, maintained his place as the 3-2 favorite for the $1 million Dirt Mile. Eight Rings, still in the Baffert barn, opened at 8-1 on the back of an allowance victory two weeks ago. That was the same day Plainsman, trained by Brad Cox, won the Ack Ack (G3) at Churchill Downs. He made his first appearance at 12-1.

If it were offered as a prop bet, whether this $1 million race gets a full field could be the longest shot on the board. Last year’s winner and Eclipse Award winner Gamine shortened again, going from 4-5 (minus-125) to 3-4 (actually minus-135) to repeat.

The futures market is bullish on Brown’s 2-for-2 Champagne winner Jack Christopher, who went from 11-4 to 5-2 to win the $2 million Juvenile. Baffert’s American Pharoah (G1) victor Corniche faded from 3-1 to 7-2. Commandperformance, who finished second to Jack Christopher in the Champagne, opened at 6-1.

Echo Zulu, an undefeated, two-time Grade 1 winner for trainer Steve Asmussen, was cut from 7-4 (plus-175) to 8-5 (plus-165) to win the $2 million Juvenile Fillies. The rest of the odds were unchanged from last week.

With no changes in the odds, Appleby’s 3-for-5 Group 3 winner Modern Games is still the 3-1 favorite to come from England and win the $1 million Juvenile Turf.

Wild Beauty is still the 3-1 favorite on the strength of her win last month in the Natalma Stakes (G1) at Woodbine, even though she finished fifth Oct. 8 in the Fillies’ Mile at Newmarket, England. None of the futures changed for this $1 million race.

Averly Jane rode her 4-for-4 record and her triumph last Sunday in the Indian Summer Stakes at Keeneland into the favorite’s role for the $1 million Juvenile Turf Sprint (G2).