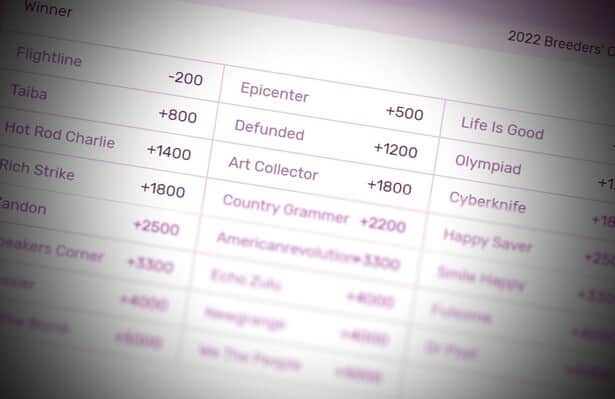 It might not have been as impressive as his previous victories, but for Life Is Good, a win is a win. That appeared to be how the betting market reacted to his triumph in the slop Saturday in the Grade 1 Woodward Stakes at Aqueduct.

The 4-year-old Into Mischief colt shortened from 8-1 to 7-1, the sole third choice in international betting to win the Breeders’ Cup Classic on Nov. 5 at Keeneland.

While Flightline remained the 1-2 favorite to win the $6 million race, there were eight changes underneath him in the odds updated Sunday by the Costa Rica betting site Bovada.

Seven of the nine races for 3-year-olds and up had changes in their prices Sunday.

Classic. Defunded, who won the Awesome Again (G1) at Santa Anita on Saturday, and Rich Strike, who was a close second to Hot Rod Charlie in the Lukas Classic (G2) at Churchill Downs, made their first appearances in the market for the 1 1/4-mile, $6 million race. Defunded opened at 12-1, the co-fifth choice. Rich Strike joined the crowd at 18-1. Their additions and the dropping of Mandaloun and Scalding kept the number of Classic betting choices at 23.

Dirt Mile. Most of the moves underneath the firm 3-2 odds for Jack Christopher involved horses who do not appear bound for this one-turn race. Life Is Good drifted to 7-2 but stayed on the board even after trainer Todd Pletcher said the Classic was the likely target. The same went for Taiba and Epicenter, who remained open for bets since they had not been ruled out of the Classic.

Filly & Mare Sprint. While Goodnight Olive stayed put as the 3-1 favorite, Kimari shortened from 5-1 to 4-1 on the strength of her win last Sunday in the Gallant Bloom (G2) at Aqueduct. Echo Zulu opened at 5-1 after her comeback score in the Dogwood (G3) at Churchill Downs on Sept. 24.

Turf. With commitments from Europe still being finalized, three horses from across the Atlantic were cut to tepid, 5-1 joint favorites. Nations Pride, who had two U.S. graded-stakes wins this summer, and Rebel’s Romance, whose four-race winning streak includes a pair of Group 1 races in Germany, would represent Godolphin trainer Charlie Appleby. Vadeni came into the mix with his second-place finish Sunday in the Prix de l'Arc de Triomphe (G1).

Filly & Mare Turf. Nashwa was upset in Sunday in the Prix de l’Opêra (G1) in Paris, but her runner-up result on the very soft ground burnished her position as the favorite for the 1 3/16-mile race at Keeneland. The 3-year-old Frankel filly shortened from 7-2 (plus 350) to 11-4 (plus 275). Former co-favorite Inspiral, a stablemate of Nashwa also trained by John and Thady Gosden, drifted to 5-1. She has been idle since she won the Marois (G1) in August at Deauville, France.

Mile. Modern Games still was the 3-2 favorite to become a two-time Breeders’ Cup winner, and there was only one change beneath him in the market for this race. Casa Creed drifted from 14-1 to 20-1 in spite of a last-out victory in the Fourstardave Handicap (G1) and five consecutive weekly workouts at Saratoga for trainer Bill Mott.

Distaff and Sprint. There were no changes in the markets for these two races. Nest, who is due back Saturday in the Beldame (G2) at Aqueduct, still was the 6-5 (actually plus 135) favorite in the 1 1/8-mile Distaff. Reigning division champion Jackie’s Warrior held firm at 8-5 (plus 165) to win the six-furlong Sprint.