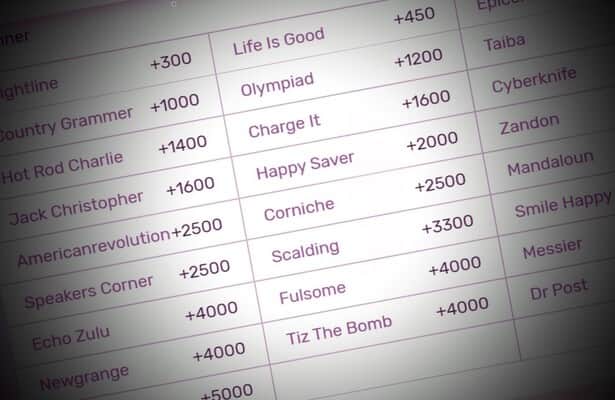 Undefeated but lightly raced Flightline held firm as the favorite while recent Saratoga winners Life Is Good drifted and Epicenter shortened in fixed-odds futures betting for the Breeders’ Cup Classic.

As John Sadler continued to work toward the Sept. 3 Pacific Classic (G1) at Del Mar, 4-year-old Flightline remained 3-1 on Tuesday morning at one international bookmaker. Those were the same odds the 4-for-4 Tapit colt carried last week.

Epicenter, the 3-year-old Gun Runner colt who won last month in the Jim Dandy (G2), was cut from 9-1 to 7-1 at the Costa Rica-based bookmaker. The Kentucky Derby and Preakness runner-up trained by Steve Asmussen is on deck to start Aug. 27 in the Travers (G1) at Saratoga.

These were the international odds Tuesday for the Breeders’ Cup Classic, with last week’s odds shown for horses whose prices changed.

Betting also was available at Bovada on Tuesday in five other Breeders’ Cup divisions, including the just-added market for the Filly & Mare Sprint. With the Ebor Festival going on this week at York, England, wagering was suspended in the Europe-dominated Mile, Filly & Mare Turf and Turf Sprint, although it was left open for the Turf division.

Distaff. Going into Saturday’s Alabama (G1) at Saratoga, Coaching Club American Oaks (G1) winner Nest remained the 9-2 co-favorite in the Distaff. So did 4-year-old Clairière, the Shuvee (G2) victor who is headed to the Personal Ensign (G1) on the same track Aug. 27. Odds were unchanged since last week for the Distaff.

Dirt Mile. The same dozen horses as last week. The same odds. And the same risk in betting Life Is Good (3-1) and Flightline (7-2). Either or both could end up in the Classic instead. The directions they take are unlikely to be confirmed for weeks.

Sprint. Remember that question about which race Flightline will start? Based on his odds shortening from 7-2 to 3-1, it would appear there has been some action on his starting Nov. 5 in the Sprint at Keeneland. At the same time, there was a slight fade on 4-year-old Jackie’s Warrior. Unbeaten in four starts this year and still the Sprint favorite, Asmussen’s Vanderbilt Handicap (G1) winner went from 6-5 to 5-4. Jackie’s Warrior is probable for the Aug. 27 running of the seven-furlong Forego (G1) at Saratoga.

Turf. It was curious this division remained open for betting. Other grass-race markets were suspended while so many would-be candidates were entered this week for the Juddmonte International (G1), Yorkshire Oaks (G1) and Nunthorpe (G1) at York. What’s more, 5-1 favorite Yibir had what was called a minor setback that prevented him from racing Aug. 27 in the Sword Dancer (G1) at Saratoga. The 18 horses still in play carried the same odds as last week.

Filly & Mare Sprint. Matareya and Just One Time, both trained by Brad Cox, and fellow Grade 1 winner Kimari opened joint 5-1 favorites to win this seven-furlong race. The 3-year-old Matareya finished third Aug. 6 in the Test (G1) at Saratoga. Since losing the Derby City Distaff (G1) on May 7, 4-year-old Just One Time has had only one timed workout – none since July 2. Wesley Ward-trained 5-year-old Kimari rebounded from her fifth-place outcome in the Derby City Distaff to win last month’s Honorable Miss Handicap (G2) at Saratoga. Upcoming starts for the three horses were uncertain.