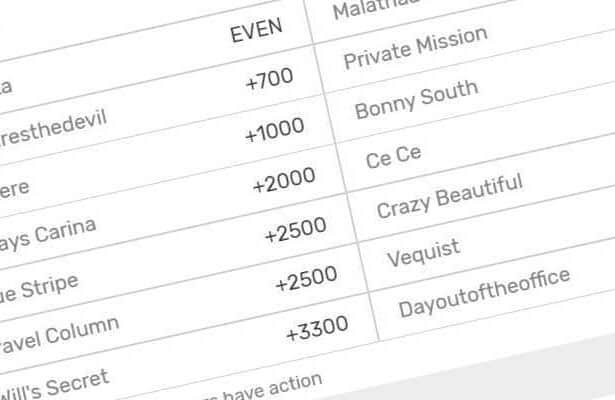 While Knicks Go and Tarnawa held their ground as favorites for the Breeders’ Cup in less than two weeks, Letruska went one better. Her futures odds shortened ahead of the Nov. 5 and 6 championships at Del Mar.

Knicks Go remained the 3-1 favorite to win the $6 million Classic, according to updated prices from the Costa Rica bookmaker Bovada. Tarnawa was still 2-1 to repeat as the winner of the $4 million Turf.

Bidding to be the Eclipse Award winner as Horse of the Year, 5-year-old mare Letruska shortened from 3-2 to even money to finish first in the $2 million Distaff.

This 269 betting choices will be cut by about 30 percent Wednesday, when the pre-entries are revealed. The deadline to submit them is Monday at 3 p.m. EDT.

Here are the updated Breeders’ Cup futures odds from Bovada.

Not only did Knicks Go’s odds remain unchanged, so did the rest of the top six in betting for the Classic. Still looking for his first Grade 1 score, Life Is Good carried the only change among the shortest-priced horses, drifting from 8-1 to 10-1. He is also still the favorite to win the Dirt Mile.

Even as Tarnawa remained firm as the favorite in the Turf, there was a change in the second choice. Trainer Chad Brown’s three-time Grade 1 winner Domestic Spending actually moved up by holding steady at 9-2. Mishriff went from 4-1 to 5-1 and remained on the board even though co-trainer John Gosden ruled out racing him again this year.

On a five-race winning streak, Letruska became the second horse to be cut to even money or better in the Breeders’ Cup futures. Behind Kentucky Oaks and Alabama (G1) victor Malathaat at 9-2, two of Brown’s 5-year-old mares – Dunbar Road at 7-1 and Royal Flag at 8-1 – made their first appearances. Trainer Bob Baffert’s 3-year-old filly Private Mission also opened at 8-1.

Jackie’s Warrior is still the 6-5 favorite to win the six-furlong, $2 million Sprint. Special Reserve, who finished first on Oct. 8 in the Phoenix Stakes (G2) at Keeneland, opened as the new 5-1 second choice. He replaced Dr. Schivel, the two-time Grade 1 winner who went from 5-1 to 6-1. Following Sea, the winner of the Vosburgh (G2) on Oct. 9 at Belmont Park, made his first appearance at 13-2.

With streaking Flower Bowl (G1) winner War Like Goddess firm as the 3-1 favorite, there were few changes in the market for the $2 million Filly & Mare Turf. Loves Only You, a 5-year-old mare who will lead Japan’s string of seven Breeders’ Cup horses, slipped from 5-1 to 6-1. Empress Josephine, the Coolmore homebred who finished third and then ninth in Grade 1 races one week apart at Keeneland this month, opened at 16-1.

The only change in the Dirt Mile odds that happened beneath 3-2 favorite Life Is Good came with By My Standards. Unraced since Aug. 7, when he was fifth in the Whitney (G1) at Saratoga, trainer Bret Calhoun’s 5-year-old went from 12-1 to 14-1.

The odds repeated themselves for the Turf Sprint, led by Golden Pal’s 8-5 (actually plus-165). The only change was the addition of The Lir Jet (16-1), who won his U.S. debut Sept. 11 in the Franklin-Simpson (G2) at Kentucky Downs.

Never mind who will win. Who will show up? Amid reports of ongoing attrition from this $1 million race, defending winner and 2020 division champion Gamine looks like she is holding all the money at 5-6 (actually minus-135). Edgeway opened at 6-1 after trainer John Sadler confirmed she would be entered. Bell’s the One was added at 10-1 despite Neil Pessin’s decision not to send her to the Breeders’ Cup.

Bettors apparently cannot get enough of 2-for-2 Grade 1 victor Jack Christopher, who has gone from 11-4 to 5-2 to 2-1 in consecutive weeks. Trainer Ken McPeek’s commitment to send Breeders’ Futurity winner Rattle N Roll to Del Mar led to his being cut from 7-1 to 6-1.

Being 3-for-3 with two Grade 1 triumphs, Echo Zulu is an unflinching 8-5 (actually plus-165) favorite to win this race. The only change in this market was the addition of Matareya, a maiden winner from the Brad Cox stable who finished fifth in the Alcibiades (G1) on Oct. 8 at Keeneland. She opened at 16-1.

Behind 3-1 favorite Modern Games, who was confirmed by Appleby for the flight to America, four new names showed up in the Juvenile Turf futures. They were led by One Timer (11-2), a 3-for-3 gelding who won a black-type stakes at Santa Anita in her turf debut Oct. 1 for trainer Larry Rivelli. She is also 5-1 to win the Juvenile Turf Sprint.

This race is more in flux than any other. One big reason is that Appleby did not include the favorite Wild Beauty when he told Daily Racing Form about the Godolphin horses who would be shipped to the Breeders’ Cup. She remained listed at Bovada but drifted from 3-1 to 4-1. The second choice Tenebrism, who was cut from 11-2 to 5-1, was expected to be sent to California by trainer Aidan O’Brien.

Undefeated in four races for trainer Wesley Ward, Averly Jane shortened from 3-1 to 9-4 to win the $1 million Juvenile Turf Sprint (G2). Most of the prices held firm behind her while five 2-year-olds were added.