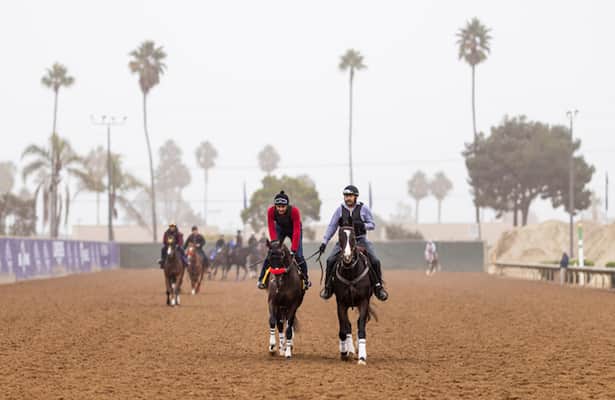 The Breeders' Cup communications team provided these notes on starters in the championship races.

Art Collector – Bruce Lunsford’s Breeders’ Cup Classic-bound homebred Art Collector had an easy jog under Neil Poznansky on Friday morning, one day ahead of his date with America’s richest race. Trainer Bill Mott will start four horses this weekend, seeking his 11th Breeders’ Cup trophy and third in the Classic.

“Everything’s good. Channel Maker is in (the Turf), and all the horses are good,” Mott said.

“They’re both training as well as they possibly can, they’re both doing great,” Cox said. “Now, it’s just a matter of what kind of trip they get. We’re excited for tomorrow.”

Express Train – Trainer John Shirreffs sent Express Train to the track for a strong gallop very early Friday morning to complete his final preparations for Saturday’s Classic. With abbreviated training hours again Saturday, the 4-year-old will walk on the morning of the race.

When asked about the key to Express Train winning the 10-furlong race, Shirreffs said, “Stay on the outside of horses.”

“He just jogged today. Everything’s fantastic with Charlie,” O’Neill said. (MacKinnon) is good to go today (in the Juvenile Turf).”

A winner of $6,171,535 in Breeders’ Cup purses, O’Neill seeks his sixth trophy at the World Championships and first in the Classic. All in all, 19 of his 58 starters have earned a check, and nine have finished in the top three.

Max Player – George Hall and SportBLX Thoroughbred Corps’ Max Player had a final gallop Friday, one day before he attempts to give Hall of Fame trainer Steve Asmussen his third Breeders’ Cup victory in a year in which the trainer became the winningest trainer in North America. The trainer hit the milestone Aug. 7 when Stellar Tap provided him with career win No. 9,446 at Saratoga.

“We’ve had some monumental moments this year that are more than just memorable,” Asmussen said. “It started, I think coming off of last year and the pandemic, the uniqueness of that. Julie’s and my oldest (Keith) getting to ride and winning a stakes, just things that you don’t think of. And then for the same horse to win a Grade 1 being part-owned by my parents and getting to run the horse in the Kentucky Derby for your parents. Setting the North American win record was something we’d been aiming at a long time. Those blessings for us as a family, to be able to look back over ground covered has been extremely special.”

Medina Spirit – Umberto Gomez, regular exercise rider for Kentucky Derby winner Medina Spirit, told trainer Bob Baffert that he didn’t wear his riding gloves for this morning’s gallop aboard the 3-year-old because he needed the extra gripping power to pull the colt up afterward.

Baffert said, “He’s really training well. But you know, this is such a tough race. There’s a lot of speed in the race and there are a lot of things that have to happen to win this race. He’s ready, though.”

The son of Protonico will walk at the barn tomorrow morning.

Stilleto Boy – Steve Moger’s Stilleto Boy galloped 1 1/2 miles under exercise rider Jose Sandoval before 6 o’clock on a foggy Friday morning at Del Mar to complete his training for the Classic. Stilleto Boy will not go to the track Saturday morning.

Trainer Ed Moger Jr., who will be saddling his first Breeders’ Cup starter, will give a leg up to Kent Desormeaux Saturday afternoon on Stilleto Boy, who, at 30-1 on the morning line, is the longest shot in the field of nine.

“I hope there is a ton of speed and he can relax not far off it,” Moger said. “That’s the best scenario for him. I feel good about him and feel like he will run his best race and hopefully get a goof trip.”

Tripoli – Pacific Classic winner Tripoli completed his Classic preparations by galloping once around with assistant trainer Juan Leyva aboard. Leyva, a former jockey who has been subbing for trainer John Sadler all week, is celebrating the 10-year anniversary of his Breeders’ Cup Filly & Mare Sprint victory aboard Musical Romance. He joined Sadler in 2017 after retiring from the saddle.

Trainer Bob Baffert said about Private Mission, “From the 1 post position, she’s going to have to be ready to go. The key for her will be the break.”

Both fillies are scheduled to walk Saturday.

Polanco said there is a possibility Blue Stripe would go to the track in the morning.

Listed at 30-1 on the morning line, Blue Strike will break from post 4 in her U.S. debut under Frankie Dettori.

“I would like to see a lot of speed early and have her get a good position and lay just off the leaders,” Polanco said of what he would like to see from the 4-year-old filly who will be making her first start in six months.

Clairiere – Trainer Steve Asmussen has made a habit of sending his horses to California well in advance of the Breeders’ Cup and has found great success with that method. Four of his seven Breeders’ Cup victories have taken place in California, including the 2017 Classic with Gun Runner at Del Mar. Stonestreet Farm’s Clairiere and her stablemates were sent West shortly after their last races and the 3-year-old filly has had four works in Southern California in advance of the Distaff.

“What we’re doing is trying to eliminate any variable that will keep them from running their race to compete at this level,” Asmussen said. “You don’t want any excuses whatsoever. We’ve done it for several years whenever the Breeders’ Cup is in California and have had success. I feel that we’ve been rewarded for it. You know, the sacrifices, (assistant trainer) Scott (Blasi) hasn’t been home for, who knows how long, but the attention to detail that he takes to these horses, I think makes it possible. It puts us in the position that we are today.”

Letruska – Trainer Fausto Gutierrez sent the 5-year-old mare Letruska out for a 1-mile jog alongside a pony Friday morning.

On race day Saturday, Letruska, the 8-5 morning-line favorite in the 38th Distaff will walk on the ring in front of her stall.

Lertruska and jockey Irad Ortiz Jr. will start from post 6 in the field of 11. She is aiming for her sixth consecutive victory. The speedy mare typically is the pacesetter in her races.

“I think she needs to make her normal race,” Gutierrez said. “I know that every race is different. The jockey needs to make the correct decision. He needs to get her into a rhythm where she is comfortable.”

Malathaat – Shadwell Stable’s 3-year-old Malathaat galloped 1 1/4 miles Friday morning. She will not go to the track on Saturday morning.

Hall of Fame trainer Todd Pletcher on what the daughter of Curlin must do to win the Distaff: “Show up.”

Marche Lorraine – U. Carrot Farm’s Marche Lorraine appeared on the main track shortly after 6 o’clock Friday morning and galloped twice around with trainer Yoshito Yahagi looking on from the viewing stand on the backstretch.

Marche Lorraine, along with Loves Only You (JPN) in the Breeders’ Cup Filly and Mare Turf, will represent Yahagi’s first runners at the world championships.

Listed at 30-1 on the morning line and to be ridden for the first time by Oisin Murphy, Marche Lorraine will break from post 10 in the 11-horse Distaff field.

A very foggy morning Friday at Del Mar had visibility limited as international contenders trained ahead of Breeders’ Cup weekend. The first horse out was Malaveth (Juvenile Fillies Turf) who left the international quarantine barn at 5:30 and did light exercise ahead of her run this afternoon. She was joined by fellow French raider Rougir (Filly & Mare Turf).

Aidan O’Brien was trackside once again and watched his horses gallop up the Del Mar home stretch. Today O’Brien is represented by Glounthaune (Juvenile Turf) who has done nothing wrong training during the week and looks to have a big run ahead of him.

Love (Filly & Mare Turf) continues to impress as does Mother Earth (IRE) who have both taken the eye during the week.

Charlie Appleby was trackside to watch his string. As has been the case all week, his horses looked in great shape. Modern Games (Juvenile Turf) has impressed since his time in Del Mar and interestingly has been ridden by race day jockey William Buick each day.

Space Blues (Mile) has been a standout throughout the week and again impressed with his demeanor today.

Confidence is high in the Twilight Jet camp with Irish trainer Michael O’Callaghan enthusiastic about his chances. O’Callaghan said, “Preparations couldn’t have gone better during the week. We’ve a good draw in gate one so hopefully Leigh Roche can get him out and go forward. It’s a great thrill to have a runner at the Breeders' Cup and I’m hopeful he’ll run a big race.”

Ryan said, “Both horses have handled the week very well. They both breezed yesterday so the work is done now. As with every championship race the competition is very strong but I’m lucky to have two in the race who look to have equal chances. It's a sharp track but I walked it yesterday and it's going to be quick ground but there’s a lovely cushion of grass on it. I don’t think it's dissimilar to Keeneland. Obviously for Glass Slippers it's half a furlong shorter on this occasion but going into the race I’m very hopeful both horses will be there at the finish.”

A Case of You (Turf Sprint) is another who has pleased all week and regular work rider Ian Brennan said, “He’s bouncing. Since we got here everything has gone to plan and I couldn’t be happier. I’d be very disappointed if he didn't run a big race tomorrow so fingers crossed we get a bit of luck in running and he shows everyone how good he is. The owner, Gary Devlin, arrived yesterday and I know he’s delighted to be here. We’ll enjoy the occasion.”