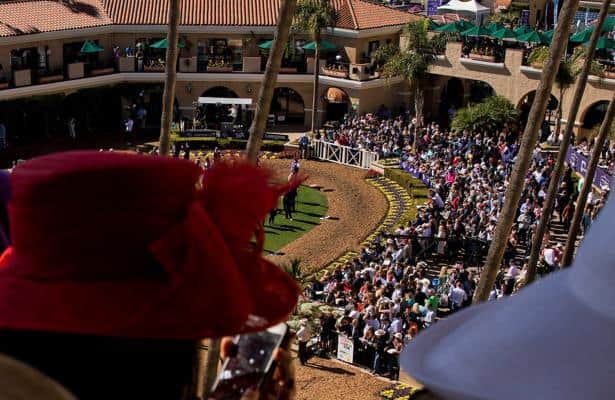 The highly successful first Breeders’ Cup at Del Mar – which has drawn rave reviews from coast to coast – got the track’s fall meeting off to a rousing start and that momentum carried through the four-week season, which concluded Sunday. The track’s fall meet numbers were the strongest since it began autumn racing in 2014.

“We are, of course, very pleased with the results from our fall season,” said Del Mar Thoroughbred Club president and general manager Joe Harper. “The Breeders’ Cup got us off to a good beginning, but our fall meet has grown into a winner all its own and now has become a staple in California. With the support of our horsemen and our bettors, Del Mar’s fall run has become the most prosperous November meet in the country.”

The two-day Breeders’ Cup extravaganza registered record betting numbers when $25,181,317 went through the tote on-track – best ever in the 34-year history of the championship event. It was an increase of more than 21% over the 2016 figures. The common pool handle over the two days was $166,077,486, the highest total since the 2010 Breeders’ Cup at Churchill Downs when there were two additional BC races held.

Del Mar’s $3.3-million fall stakes schedule – with its emphasis on turf racing – again proved highly popular to horsemen both locally and nationally. Twelve of the track’s 22 stakes were of the graded variety consisting of two Grade Is, four Grade IIs and six Grade IIIs. A pair of special horses had a national spotlight shine on them when they turned in sharp performances in the Grade I races – Mo Town shipping in from New York and mowing them down impressively on the lawn in the Hollywood Derby and the crack mare Off Limits also shipping in to clicking smartly in the Matriarch.

Del Mar’s racing office was delighted with the response from its horsemen and the numbers registered at the entry box. In the end, the track’s field size for the 14 days was 8.5 runners per race, equaling last fall’s average, which was the highest in the state and among the highest in the country. Additionally, the track’s thriving “Ship and Win” program took another jump forward during the fall run. Last year in 15 days Del Mar lured 31 “S & W” horses to race at the meet. This year that number skyrocketed up 87% to 58 out-of-towners during the 14 racing days.

“No doubt the Breeders’ Cup helped expose Del Mar and our fall racing season to new parties,” noted the track’s executive vice president for racing Tom Robbins. “And no doubt that exposure can – and likely will – have positive benefits going forward. But the ultimate success of fall racing at Del Mar is in the hands of our local horsemen and they have responded in a most emphatic fashion to what we’ve had to offer.”

Robbins also noted the exceptional work done by the track’s two superintendents – Leif Dickinson with its turf course and Dennis Moore with its main track.

“We did more turf racing than ever this year and Leif and his crew were simply outstanding with the course,” Robbins stated. “And Dennis coming on board for the first time this year and remaking our dirt track was a huge advantage to all concerned. We’ve had some of the safest racing in Del Mar history this past year and those two gentlemen were the foremost reason why.”

The seaside track will resume racing in 2018 with its popular summer meet from July 18 to September 3.

Belmont Park returns Thursday without spectators – yet
Editor's note: An earlier version of this story in...