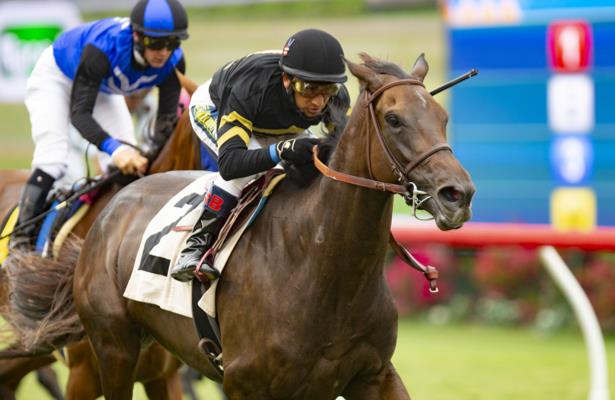 Calumet Farm’s Vexatious, winner of the Personal Ensign (G1) at Saratoga over champion Midnight Bisou, continued working toward a probable start in the $2 million Breeders’ Cup Distaff (G1) on Nov. 7 with a half-mile breeze in :50.20 Saturday morning shortly after the track opened for training.

“She always goes at 5:30,” trainer Jack Sisterson said. “She wants to go early and loves being outside. When the weather is nice, she will spend a lot of time out in the paddock.”

Saturday’s work was the fifth half-mile breeze for Vexatious since finishing fifth behind champion Monomoy Girl in the La Troienne (G1) last month at Churchill Downs.

A millionaire, the 6-year-old True Timber has eight graded stakes placings on his resume but no graded victories.

“He’s a horse that deserves to win a big race; he tries hard every time,” Sisterson said. “He’s probably not a three-quarters horse and it was my mistake to run him in the (6-furlong) Vosburgh (G1) and he drew the rail. He had run so well in the (7-furlong) Forego (G1) beaten a little more than a length when he was third.”

Runner-up in the Claiborne Breeders’ Futurity (G1) here on Oct. 3, Keepmeinmind worked a half-mile in :49.20 with jockey David Cohen aboard.

“He went a half in an easy :50 like we planned,” trainer Paulo Lobo said via text about Ivar, who is owned by the partnership of Bonne Chance Farm and Stud RDI.