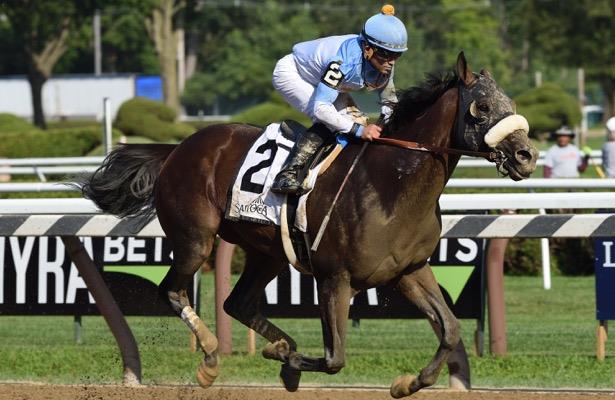 Lexitonian ships to Del Mar after scratching out of last weekend’s Alfred G. Vanderbilt Handicap (G1) at Saratoga. Wildman Jack, winner of Santa Anita’s Daytona Stakes (G3) on May 23 at 5 1/2 furlongs on the turf, switches to dirt here.

There’s no doubt which runner the $500,000 Personal Ensign (G1) goes through Saturday. That would be Midnight Bisou, who won this 1 1/8-mile race last summer on the way to earning the Eclipse Award for Champion Older Dirt Female.

Midnight Bisou’s 2019 Personal Ensign triumph came after a spectacular stretch duel against Elate. Can any of the other older fillies or mares here present a similar challenge to the Steve Asmussen-trained champion?

Point of Honor has missed the board just once in nine career starts but hasn’t won since last May’s Black-Eyed Susan Stakes (G2) at Pimlico. She was second last out June 13 in Belmont Park’s Ogden Phipps Stakes (G1).

Tom’s d’Etat was made 6-5 morning line favorite for the 1 1/8-mile Whitney. Last out, the Al Stall Jr. trainee earned a 109 Beyer Speed Figure – best in any 2020 dirt race longer than a mile – when taking Churchill Downs’ Stephen Foster (G2) on June 27 at the Whitney’s distance.

By My Standards ran second to Tom’s d’Etat in the Stephen Foster. Code of Honor returns to the site of his biggest career win, last year’s Travers Stakes (G1). Improbable enters off a victory June 6 in Santa Anita’s Hollywood Gold Cup (G1).

Baffert trainee Fighting Mad scored by 3 1/4 lengths in the Santa Maria in front-running style for the biggest victory of her career. In three career races at Del Mar, she’s notched two victories and a runner-up finish.

Ollie’s Candy will try to win the Hirsch a second straight year for trainer John Sadler. A victory would punch a ticket to the Breeders’ Cup Distaff, a race where she finished fourth last November.

Only two other horses went postward Saturday at Ascot to challenge champion Enable, and she defeated them both. The 6-year-old mare showed a powerful closing move to score a third victory in the King George VI and Queen Elizabeth (G1).

Enable is now an 11-time Group or Grade 1 winner and has lost only three times in her 17-race career.

“I’m a bit emotional about it, because she’s special,” said jockey Frankie Dettori, whose victories aboard Enable include the 2018 Breeders’ Cup Turf.

Racing fans could see Enable again next month in the Yorkshire Oaks (G1) before a potential career finale in October at Longchamp in the Prix de l'Arc de Triomphe (G1). Should trainer John Gosden extend her career beyond the Arc, a Breeders’ Cup Turf bid awaits her Nov. 7 at Keeneland.

Jockey Jim Crowley tried to fit Mohaather through a hole with two furlongs to go but was closed off. The rider regrouped and moved the 4-year-old to the far outside, where he had the room to unleash a winning rally.

Authentic’s win in the Haskell (G1) made him the first runner from the barn of Bob Baffert – a 15-time Breeders’ Cup winner – to clinch a berth in the 2020 championships. The Kentucky-bred Into Mischief colt is 4-for-5 lifetime. The 3-year-old sits second in the points standings for the Sept. 5 Kentucky Derby, which is targeted as his next start. Despite Authentic’s Haskell triumph, he doesn’t appear in the Breeders’ Cup Classic Rankings.

A Kentucky-bred son of Frankel, 6-year-old Mozu Ascot is a two-time Group 1 winner in Japan. The Yoshito Yahagi trainee last finished sixth May 5 at Funabashi in the Kashiwa Kinen.

7-year-old Tom’s d’Etat showed no signs of slowing down in the Stephen Foster (G2), winning his fourth straight start. Conditioner Al Stall Jr. has the Kentucky-bred Smart Strike horse training at Saratoga in preparation for the $750,000 Whitney (G1), scheduled for Saturday. Tom’s d’Etat will also put his No. 1 spot in the Breeders’ Cup Classic Rankings on the line in the Whitney.

One race after stamping a Breeders’ Cup Sprint “Win and You’re In” ticket by taking Belmont’s Carter Handicap (G1), Vekoma won the Met Mile (G1) to also earn a Breeders’ Cup Dirt Mile berth. Trainer George Weaver and owners will have to choose which way to go with the 4-year-old, Kentucky-bred Candy Ride colt, who’s No. 10 in the Breeders’ Cup Classic Rankings. Next up is the $300,000 Forego (G1) on Aug. 29 at Saratoga.

Making her first start since a valiant second-place run Feb. 29 in the Saudi Cup, Midnight Bisou was much the best in the Fleur de Lis (G2). Steve Asmussen trains the 5-year-old Midnight Lute mare, who was named the Eclipse Award 2019 Champion Older Dirt Female. The Kentucky-bred has run twice in the Breeders’ Cup Distaff, finishing third in 2018 and second in 2019. She’s entered for Saturday’s $500,000 Personal Ensign (G1) at Saratoga, a race she won last year. Midnight Bisou is the lone female in the Breeders’ Cup Classic Rankings, checking in at No. 5.

Steve Asmussen trainee She’s a Julie became a two-time Grade 1 winner with her Ogden Phipps victory. The 5-year-old, Kentucky-bred Elusive Quality mare then followed that effort July 18 with a seventh-place finish at Monmouth Park in the Molly Pitcher Stakes (G3). She carried 127 pounds in that race, six more than any of her nine rivals

The French-bred Raging Bull secured the first “Win and You’re In” berth of the U.S. racing season with his Shoemaker Mile (G1) score. Chad Brown trains the 5-year-old Dark Angel gelding, who was third last out at Keeneland on July 10 in the Maker’s Mark Mile Stakes (G1). He’s now working at Saratoga.

George Weaver trainee Vekoma made his Grade 1 breakthrough with a 7 1/4-length Carter (G1) victory. The 4-year-old, Kentucky-bred Candy Ride colt also won a “Win and You’re In” race for the Dirt Mile Division July 4 when taking Belmont’s Metropolitan Handicap (G1). Sitting at No. 10 in the Breeders’ Cup Classic Rankings, he’s targeting the $300,000 Forego (G1) on Aug. 29 at Saratoga.

Enable scored the first win of her 6-year-old campaign when taking the King George VI and Queen Elizabeth (G1) for a remarkable third time. The Great British-bred daughter of Nathaniel has now earned more than $14 million running for trainer John Gosden. The 2018 Breeders’ Cup Turf champ didn’t attempt to defend her title last year. Will she make a trip to the U.S. this November?

Kevin Ryan trains Hello Youmzain, a 4-year-old son of Kodiac. The French-bred colt stayed in Group 1 company off his Diamond Jubilee score, running fifth at Newmarket on July 11 in the July Cup.