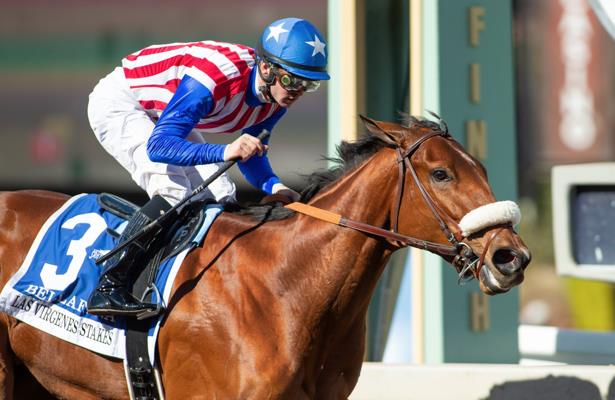 Bellafina, runner-up in the 2019 Breeders’ Cup Filly and Mare Sprint, is the 9-5 morning-line favorite for the $300,000 Ballerina Stakes (G1). The race goes seven furlongs, the same distance as November’s championship event.

Serengeti Empress, carrying the high weight of 122 pounds, looks to improve at a shorter distance after a pair of off-the-board finishes in two-turn races. Fellow Grade 1 winner Come Dancing seeks a repeat of her 2019 Ballerina triumph.

Running fourth at the top of the stretch, jockey Flavien Prat angled Collusion Illusion toward the rail with a furlong to go. He rallied by the pacesetters and hit the wire just in time to nip late-charging Lexitonian by a nose.

"When he darted to the rail, I knew he was going to be coming,” Glatt said. “I got a little worried if he was going to find a place to go, but he was able to and came through in the end.”

Collusion Illusion improved to 6: 5-0-0 for his career and 3-for-3 this season. He’ll try to become the first Breeders’ Cup hero for Glatt, who saddled Blackjackcat to a third-place finish in the 2017 Mile.

"To look at her you wouldn’t think she could go (a distance), but when she started opening up, I figured he must know what he’s doing,” Baffert said. “Basically, she ran them off their feet.”

Fighting Mad sports an 8: 5-1-0 record and has a trio of graded stakes wins. Baffert has never won a Breeders’ Cup Distaff, coming closest when Abel Tasman was second in 2017.

Whether you know Saratoga as Graveyard of Champions or Graveyard of Favorites, Vexatious’ upset of Midnight Bisou in Saturday’s Personal Ensign (G1) fit both categories.

Vexatious, winless since 2018 and sent off at 10-1, outlasted 3-10 favorite and 2019 champion older female Midnight Bisou by a neck. Stewards confirmed the result after inquiring into a tight stretch duel.

"It's always a worrisome time when the inquiry sign comes up, but if it wasn't mean to be, we would still be proud of our horse's game effort,” Vexatious trainer Jack Sisterson said. “She ran terrific."

6-year-old Vexatious now stands at 23: 4-3-7 for her career. She became Sisterson’s first Grade 1 winner with the Personal Ensign win and can now become his first Breeders’ Cup starter.

Saturday’s Whitney (G1) left racing fans wondering what they could’ve seen had favorite Tom’s d’Etat not stumbled out of the gate.

The stumble takes nothing away from winner Improbable, however. The Baffert trainee took over coming through the second turn and was eased in the final yards of his second straight Grade 1 triumph.

"Finally, he's grown up a little bit," said jockey Irad Ortiz Jr., who also rode Improbable to a fourth-place finish in the 2019 Kentucky Derby. "He turned into a nice horse. … We had a beautiful trip."

Improbable now stands at 13: 6-3-0 with more than $1.5 million earned. He can make a second Breeders’ Cup start after running fifth in last year’s Dirt Mile and can also give Baffert a shot at a fourth Classic win.

Authentic’s win in the Haskell (G1) made him the first runner from the barn of Baffert – a 15-time Breeders’ Cup winner – to clinch a berth in the 2020 championships. The Kentucky-bred Into Mischief colt is 4-for-5 lifetime. The 3-year-old sits second in the points standings for the Sept. 5 Kentucky Derby, which is targeted as his next start. Despite Authentic’s Haskell triumph, he doesn’t appear in the Breeders’ Cup Classic Rankings.

Improbable shipped East from Baffert’s California base for the Whitney (G1) and proved best in a field of five millionaires. The Kentucky-bred son of City Zip has now posted back-to-back top-flight wins, also taking the Hollywood Gold Cup Stakes (G1) on June 6 at Santa Anita Park. The 4-year-old ranks third in the Breeders’ Cup Classic rankings.

A Kentucky-bred son of Frankel, 6-year-old Mozu Ascot is a two-time Group 1 winner in Japan. The Yoshito Yahagi trainee last finished sixth May 5 at Funabashi in the Kashiwa Kinen.

7-year-old Tom’s d’Etat was a dominant winner of the Stephen Foster (G2) for trainer Al Stall Jr. but saw a four-race winning streak snapped Saturday in the Whitney (G1). The Kentucky-bred Smart Strike horse went off favored at Saratoga but stumbled at the start and finished third to Improbable and By My Standards. He’s now tied with Maximum Security for the No. 1 spot in the Breeders’ Cup Classic Rankings.

One race after stamping a Breeders’ Cup Sprint “Win and You’re In” ticket by taking Belmont’s Carter Handicap (G1), Vekoma won the Met Mile (G1) to also earn a Dirt Mile berth. Trainer George Weaver and owners will have to choose which way to go with the 4-year-old, Kentucky-bred Candy Ride colt, who’s No. 10 in the Breeders’ Cup Classic Rankings. Next up is the $300,000 Forego (G1) on Aug. 29 at Saratoga.

Fighting Mad entered her 4-year-old season with only five career starts to her name but has become the West Coast’s hottest distaffer. After winning the Santa Maria Stakes (G2) on May 31 at Santa Anita, she backed up 9-5 favoritism in the Clement L. Hirsch (G1). The Kentucky-bred filly shares the same trainer (Baffert), owners/breeders (Gary and Mary West) and sire (New Year’s Day) as Maximum Security.

Midnight Bisou looked like her dominant self in the Fleur de Lis (G2), but then took an unexpected loss to Vexatious on Saturday at Saratoga in the Personal Ensign (G1). Steve Asmussen trains the 5-year-old Midnight Lute mare, who was named Eclipse Award 2019 Champion Older Dirt Female. The Kentucky-bred has run twice in the Breeders’ Cup Distaff, finishing third in 2018 and second in 2019. Midnight Bisou is the lone female in the Breeders’ Cup Classic Rankings but dropped after her Personal Ensign loss from No. 5 to No. 7.

Asmussen trainee She’s a Julie became a two-time Grade 1 winner with her Ogden Phipps victory. The 5-year-old, Kentucky-bred Elusive Quality mare then followed that effort July 18 with a seventh-place finish at Monmouth Park in the Molly Pitcher Stakes (G3). She carried 127 pounds in that race, six more than any of her nine rivals.

Never one to duck a challenge, Vexatious has run 14 of her 23 career starts in graded stakes. The 6-year-old Jack Sisterson trainee broke through with her biggest win Saturday when beating Midnight Bisou to the wire in the Personal Ensign (G1). The Giant’s Causeway mare posted a 105 Beyer Speed Figure in that victory, the best number a female runner has tallied this season in a main track race going more than a mile.

The French-bred Raging Bull secured the first “Win and You’re In” berth of the U.S. racing season with his Shoemaker Mile (G1) score. Chad Brown trains the 5-year-old Dark Angel gelding, who was third last out at Keeneland on July 10 in the Maker’s Mark Mile Stakes (G1). He’s now working at Saratoga, where the $400,000 Fourstardave Handicap (G1) on Aug. 22 would make a logical target.

Trainer Mark Glatt chose to keep the Twirling Candy colt Collusion Illusion on the West Coast facing older in the Bing Crosby (G1) rather than traveling East to run against fellow 3-year-olds in Saratoga’s H. Allen Jerkens (G1). That proved the right move, with the Florida-bred winning and improving to 5-for-6 lifetime.

George Weaver trainee Vekoma made his Grade 1 breakthrough with a 7 1/4-length Carter (G1) victory. The 4-year-old, Kentucky-bred Candy Ride colt also won a “Win and You’re In” race for the Dirt Mile Division July 4 when taking Belmont’s Metropolitan Handicap (G1). Sitting at No. 10 in the Breeders’ Cup Classic Rankings, he’s targeting the $300,000 Forego (G1) on Aug. 29 at Saratoga.

Enable scored the first win of her 6-year-old campaign when taking the King George VI and Queen Elizabeth (G1) for a remarkable third time. The Great British-bred daughter of Nathaniel has now earned more than $14 million running for trainer John Gosden. The 2018 Breeders’ Cup Turf champ didn’t attempt to defend her title last year. Will she make a trip to the U.S. this November?

Kevin Ryan trains Hello Youmzain, a 4-year-old son of Kodiac. The French-bred colt stayed in Group 1 company off his Diamond Jubilee score, running fifth at Newmarket on July 11 in the July Cup.