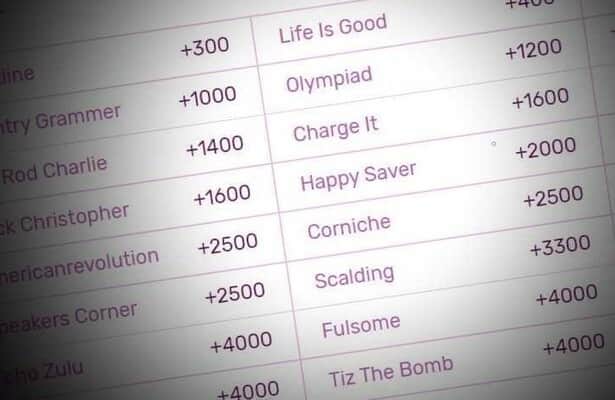 Flightline’s absence from the racetrack finally might be creating some value in his futures for the Breeders’ Cup Classic.

The same day as he was declared the 2-1 favorite from the nationwide, pari-mutuel wager that ended Sunday, the lightly raced, undefeated colt drifted from 5-2 to 3-1 in the reopened odds posted by an international bookmaker.

Flightline, a 4-year-old Tapit colt trained by John Sadler, is 4-for-4 and has raced only once since Dec. 26, winning the Met Mile (G1) on the Belmont Stakes undercard. He is expected to race next in the Pacific Classic (G1) on Sept. 3 at Del Mar.

Here is a comparison of the international odds Tuesday morning with the Breeders’ Cup Classic Future Wager pari-mutuels that closed Sunday night. Horses are listed in order of their best prices between the two markets.

Odds for seven other divisions of the Breeders’ Cup also were updated by Bovada.

Distaff. Nest, the winner of the Coaching Club American Oaks (G1), had been the sole favorite, but she drifted from 4-1 to 9-2. Clairière, who won the Shuvee (G2) last month, shortened from 5-1 to 9-2 to join Nest as a co-favorite for the Distaff. Trainer Todd Pletcher said last week at Saratoga he was leaning toward running Nest this month against fillies and mares the Alabama (G1) rather than putting her against males in the Travers (G1). Clairière is headed to the Personal Ensign (G1), where she may face Malathaat (8-1), Letruska (10-1) and Shedaresthedevil (not listed).

Dirt Mile. Life Is Good (3-1) and Flightline (7-2) might not end up in the race, but they were made two of the top three international choices in the Dirt Mile, which made its first appearance in the Bovada market. Jack Christopher, who looked more likely to be in this division than in the Classic, was the co-second choice at 7-2.

Sprint. Even with a four-race winning streak, Jackie’s Warrior drifted from 11-10 to 6-5 while remaining the clear favorite to win six-furlong renewal of the Sprint on Nov. 5 at Keeneland. The 4-year-old colt trained by Steve Asmussen was expected to start next in the Forego (G1) on Aug. 27 at Saratoga. Although he seemed more certain to be sent to the Classic, Flightline was cut from 5-1 to 7-2 to win the Sprint.

Turf. Yibir, who won this race in 2021 at Del Mar, opened as the 2022 favorite to repeat at Keeneland for Godolphin and Charlie Appleby. The 4-year-old Dubawi gelding snapped a three-racing losing streak last out when he won a Group 2 race July 7 at Newmarket. Mishriff, a distant third in the King George (G1) last month at Ascot, opened as the 7-1 second choice despite going 0-for-4 since last summer.

Mile. Since Sussex (G1) runner-up Modern Games appeared more likely to return to the Breeders’ Cup this year, he replaced 9-for-9 Baaeed as the favorite in this division. Last year’s winner of the controversial Juvenile Turf at Del Mar was moved from 11-2 to 5-1. Baaeed, owned by Shadwell and trained by William Haggas, has been focused on finishing his season this fall on British Champions Day at Ascot. He went from 11-2 last week to completely out of the Breeders’ Cup market.

Filly & Mare Turf. In the most stable Breeders’ Cup markets this summer, Nassau (G1) winner Nashwa held firm at 4-1, Grade 3 victor Emily Upjohn shortened from 7-1 to 6-1, and Falmouth (G1) runner-up Inspiral went from 5-1 to 6-1. All three are trained in England by the father-son team of John and Thady Gosden.

Turf Sprint. After finishing last in the King’s Stand (G1) at Royal Ascot, defending Breeders’ Cup winner Golden Pal ran his U.S. winning streak to seven with his triumph Friday in the Troy (G3) at Saratoga. He held firm at 11-4 (plus 225), the only one of the 19 listed horses shorter than 10-1.