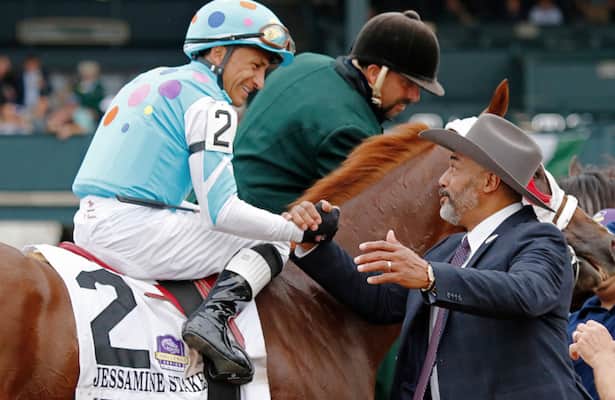 The Breeders’ Cup Juvenile Fillies Turf at Del Mar did not end with California Angel completing the Cinderella story that multitudes of racing fans were hoping for. When the California Chrome filly left the gate, she got off to a slow start, was bumped and took a wide trip to 11th place.

Trainer George Leonard, who found the filly at sale for $5,500 for owner Chris Walsh, said that despite the loss, he didn’t think California Angel ran poorly.

“She ran credible, just no luck with getting bumped around,” Leonard told Horse Racing Nation. “It wasn’t her fault really. She tried hard, just got bumped two or three times and got stuck wide all the way. Nothing worked for her.”

Leonard said the filly came out of the race in good order and has been back on the track in recent days.

“She came out fine, everything went well with no issues,” Leonard said.

The filly earned her diploma in her September debut at Kentucky Downs, where she came from last place to win late down the stretch. She returned $58.40 for that effort.

After a try on dirt netted a third-place finish at Churchill Downs, Leonard placed her on the lawn at Keeneland for her next start, the Jessamine (G2). In that race, much like her effort at Kentucky Downs, California Angel started slowly then mounted a furious rally that ended with her in the winner’s circle and Leonard collecting the first graded-stakes victory of his career.

The win also earned her a fees-paid berth in the Breeders’ Cup at Del Mar, a chance Leonard happily took.

“I enjoyed Del Mar,” the trainer said. “It was a lot of fun. I really liked it there. Everything went great, just could have had a better trip in the race.”

The filly enjoyed plenty of support from the legions of California Chrome fans across the country.

“It was unbelievable how many people are crazy about California Chrome,” Leonard said.

Leonard has moved to his winter training headquarters at Fair Grounds. He said California Angel could run there before the end of the year, but he has no definite plans.

The trainer said he continues to hold high hopes for the filly going into 2022.

“Her potential is unlimited, I think,” Leonard said. “She needs to mature. With just a little maturity, I think she has the potential to be anything.”